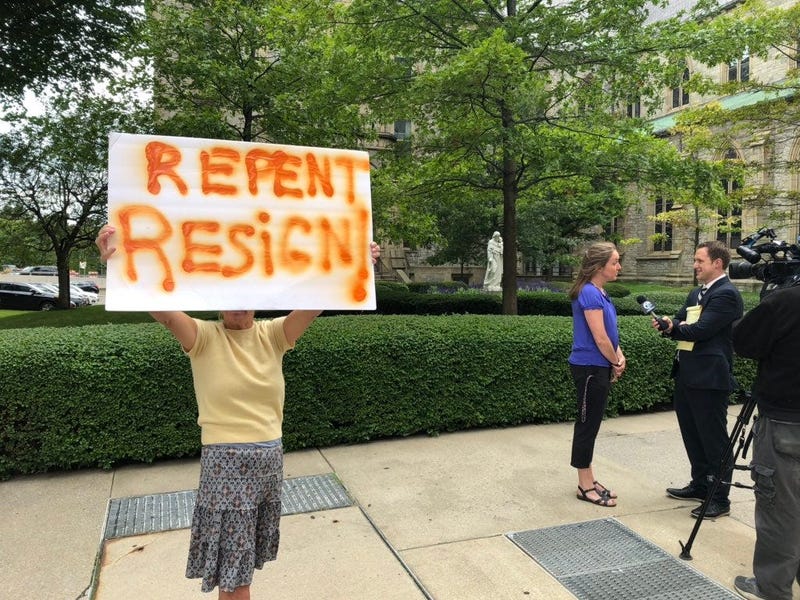 BUFFALO, N.Y. (WBEN) – Siobhan O’Connor, a whistleblower in the Catholic Diocese of Buffalo, was among the few protesters standing outside of St. Joseph’s Cathedral after Bishop Richard Malone held his press conference Wednesday detailing the complex relationship between Father Jeffrey Nowak, seminarian Matthew Bojanowski, and the bishop’s former secretary, Father Ryszard Biernat. During the press cnoference, the bishop reiterated that he will not resign.

At the time, O'Connor only heard bits and pieces of his press conference due to the ambient noise in the background.

“I came down here with a glimmer of hope in my heart,” she told Bauerle & Bellavia. “I really thought, especially given the location, the cathedral, that the bishop was going to take this opportunity to do the right thing. It was quickly apparent that not only was he not going to resign, he was going to dig his heels in even farther, which is just devastating for me personally and our whole diocese.”

“I know him to be a man who is both an arrogant person and a cowardly person,” she said. “While (Wednesday) he’s demonstrating that prideful side, I’ve also seen him ignore problems, ignore issues, and constantly put the blame anywhere but himself. I know when I released those documents, I wanted the truth to be known because so often he was able to cover it up. That’s something a lot of bishops do.”

“We’ve seen now that…Bishop Malone avoided doing anything about it as long as he could and then this investigation began, which never really resulted in anything conclusive,” she said. “Like last year, when Charlie (Specht’s) story came out, the bishop says ‘okay, Father Nowak, that’s it, you’ve got to go for an assessment’. It’s always based on what comes from those external pressures.”

O’Connor isn’t the only person who continued to call for the bishop’s resignation. Congressman Brian Higgins reiterated that the bishop should resign over his handling of the clergy sex abuse scandal while attorneys Jeff Anderson and Steve Boyd echoed the calls.

“Truth is simple,” Anderson said. “Deception, denial, and prevarication are complex. Bishop Malone is a master at it.”