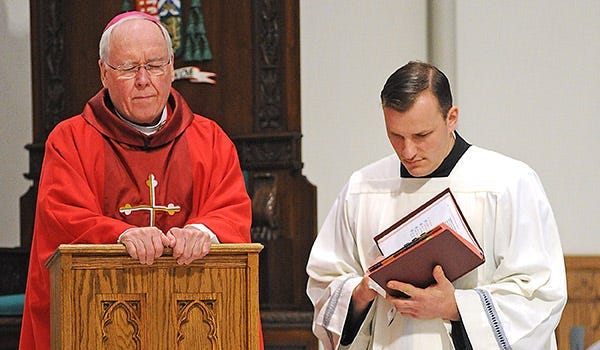 BUFFALO (WBEN) - Fr. Ryszard Biernat is the second whistleblower to come out of the Catholic Diocese of Buffalo after WKBW released conversations he had with Bishop Malone that Biernat had secretly recorded.

He also claims that he was sexually abused as a seminarian by Fr. Art Smith - a priest who was suspended in 2018 after a new substantiated allegation came forward that claims sex abuse of a minor.

Biernat is currently on a personal leave of absence from the diocese, but he's calling for Bishop Richard Malone and Auxiliary Bishop Edward Grosz to be removed from office.

On Tuesday morning, Biernat joined Brian Mazurowski and WKBW reporter Charlie Specht on WBEN to discuss a wide array of topics, including Biernat's attempt to report the alleged abuse. According to Biernat, he told Grosz the allegations regarding Smith, and Grosz responded in a threatening manner - essentially telling Biernat to drop it. He also says that Malone knew of the allegations and tried to convince Biernat to leave the whole situation alone.

"The response from the bishop was 'Ryszard...there's no point to bring up old stuff from the past? You're okay...right?" said Biernat. "The bishop was totally trying (to get) me, the victim, to clean up for them - cover up for them. It was appalling."

After discussing his own case of abuse, Biernat was asked about Malone and how the bishop perceives his own favorability. Malone was in-studio on Friday to talk with WBEN's Tom Bauerle, and Malone said he believes he has a majority of support from those who make up the Buffalo Diocese.

"If I didn't know, and I can't give you numbers, but if I didn't know I had many other lay leaders and clergy leaders with me in this, then it'd be a different story, but I know that I do. Will they challenge me as (the Movement to Restore Trust) did? Yes, they will. Do I need to hear that challenge? Yes, I do. But, I believe we can do it..." said Malone. "I have received, just today, probably 12 or 13 either voicemails or emails from people telling me, 'Bishop, stay with it; we need you; do not resign.'  There's been a very strong...kind of counter-response to the MRT decision."

However, Biernat, who served as Malone's secretary, said that Malone would think that because that's what he surrounds himself with.

"He ordered us, in a number of meetings, not to forward to him any negative messages," said Biernat. "Because of that, he's telling the truth because the most messages he gets are support because he told us not to forward any negative stuff to him."