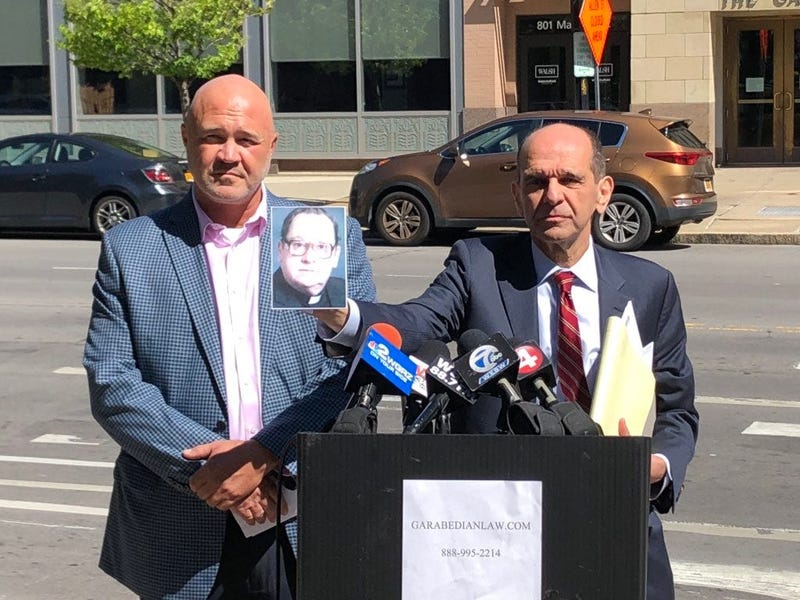 BUFFALO (WBEN) - On Thursday afternoon, prominent Boston sex abuse victims attorney Mitchell Garabedian stood in front of the Buffalo Diocese with Wayne Bortle, yet another alleged victim who's filing a claim against the institution.

Bortle claims that he was abused by Fr. Robert Conlin, and he filed a civil complaint which stated the allegations, as well as the adverse affect of a church bulletin which was distributed by Mary Immaculate Parish last Saturday.

Bortle filed suit against the Diocese of Buffalo and St. Mary's Parish but not against Conlin because Conlin died in 1997.

The Bulletin refers to Conlin Hall, named after Robert Conlin, even though Bortle has requested a name change.

Mary Immaculate Parish distributes a bulletin last Saturday which referred to Conlin Hall even though Bortle has previously requested the name to be changed. pic.twitter.com/4A9vvZXL8X

"We're going to discuss the insensitivity of Bishop Malone, and St. Mary's Parish and the Catholic Church for putting out a weekly bulletin - the last bulletin describes on page one the request for a survivors meeting, and on page two, a meeting in Conlin Hall, which is named after the perpetrator in Wayne Bortle's case," said Garabedian. "There is no excuse for such insensitivity."

Garabedian then held up a picture of Conlin and continued to bash the situation.

Bortle explained his side of the story.

"We notified the parish and the parish priest there, who's name is Father Innocent - that's not a play on words, that's his name - we reached out to him, and his response was that it's a decision he can make, so he said that decision needed to be made by Bishop Malone and the archdiocese of Buffalo," said Bortle. "I did an interview with Jay Tokasz from the Buffalo News who covered that story; he questioned them, and what did Bishop Malone and his team say? They said it's not his decision; it's the decision of that local parish."

What makes the story more intriguing is that the Buffalo Diocese put Conlin's name on their list of accused priests.

"For them then to ignore and essentially hold this person up in this hall, you can use any analogy that you want; it's like putting a knife in, twisting it and spitting into my face," Bortle added. "I think about what happened every single day, and I have every single day of my life. You put that mask on in the morning - it's all you can think about all day long."

Garabedian added that it's simply time for the diocese to start taking the healing of victims seriously.

"For the pastor at St. Mary's to list, to name and keep named a hall after a known pedophile is disgraceful," said Garabedian. "This is not rocket science, this is common sense. Take the name of the pedophile priest off the hall."