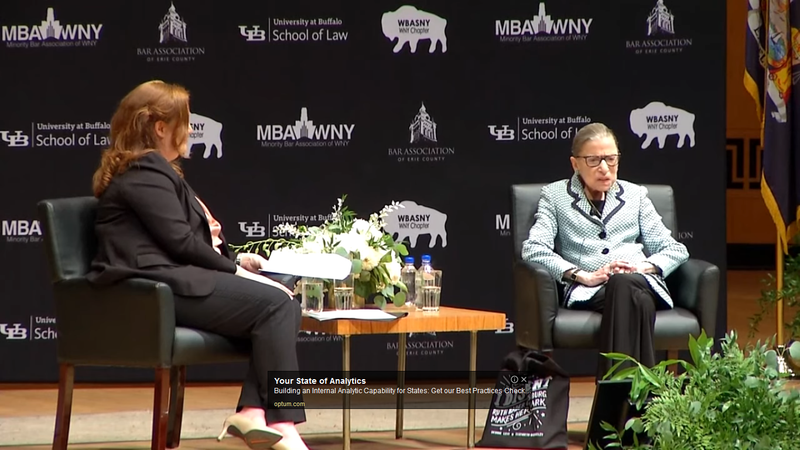 The scope of the discussion stretched far, but Ginsburg spent a lot of time talking about her career as a woman in law and how it's been incredible to see the growth over the course of her life.

"Yes, things are not perfect, but how long a way we have traveled," she said. "When you think of 1959, I graduated from law school, and I had pretty good grades. There was not a law firm in the entire City of New York that gave me an offer for a permanent job...It's just exhilarating to see women on law school faculties, deans...and women as law students often 50% or more of entering classes."

RELATED: When is right time for Ginsburg to retire from SCOTUS

She also spoke about the partisanship that has cast a negative light on Supreme Court approvals in recent memory, and Ginsburg essentially says that she doesn't have much tolerance for the trend in which partisanship is heading.

"In recent years, on both sides of the aisle, it's falling apart," she began. "People who were highly qualified, including my current Chief (Justice John Roberts) got several negative votes, Justices (Sonia) Sotomayor and Justice (Elena) Kagan also got a substantial number of negative votes, having nothing to do with their qualifications for being a fine jurist. I hope one day that there will be people who care about our country, both Democrats and Republicans, who will come together and say, 'Enough of this dysfunctional legislature; we're supposed to serve the people of the United States."

Those who attended Ginsburg's program walked away impressed with how sharp she remains after 86 years of life.

"I guess what I liked best was the way she ended it by saying that if you care enough about something, you find a way to make it happen," said local attorney Marianne Hanley. "She was inspiring throughout her talk - just her grasp of dates and facts from law decisions and years ago is amazing."

Hanley also explained the impact that Ginsburg provided for women in the legal community.

"I went to law school in the 1970's, which was when things changed," said Hanley. "All of the sudden, law schools wanted women and were recruiting women to come into it, and she was at the forefront of all of that and just happened to be in the right place at the right time, but she recognized that. Because she could recognize that and then work on it, it she opened doors for all of us."

Attorney Tim Muck said it was a wonderful evening at Kleinhans, and he echoed many of Hanley's sentiments regarding the inspiration Ginsburg has provided for the legal community, and that inspiration isn't just for women.

"Just the fact that she has really come from a place where, when she started out, people d