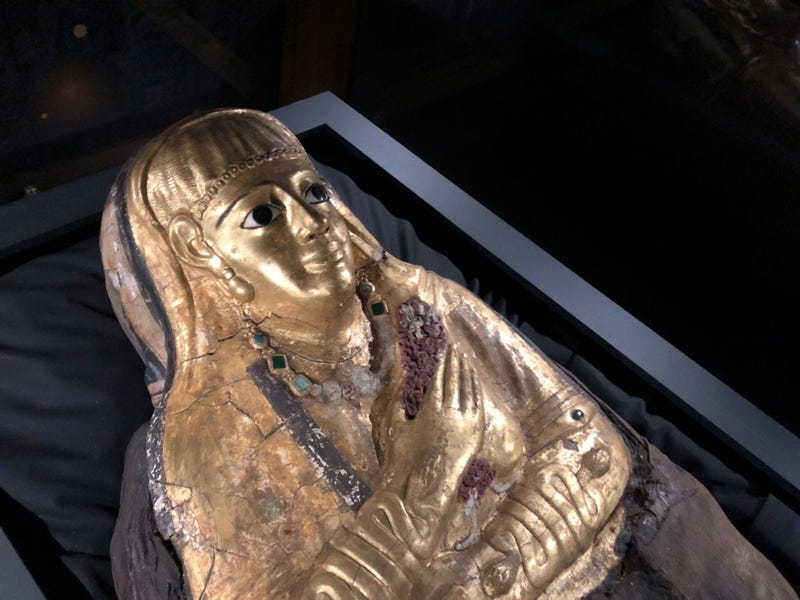 BUFFALO (WBEN) - Buffalo Museum of Science leaders are simply thrilled, as they kicked off the international tour of the Golden Mummies of Egypt exhibition with a world premiere opening on Saturday morning.

"It features 100 artifacts, eight mummies, and this is the first time this collection has ever left its home museum in Manchester, England," said President and CEO Marisa Wigglesworth.

In the 1880's, it was possible for archeologists to bring objects out of Egypt, which is obviously no longer the case. William Matthew Flinders Petrie was a famous archeologist during that time period, and most of the artifacts seen at the exhibition come from his excavations.

The incredibly preserved mummies include adults and children, and they really help to underscore the vast importance that death had on Egyptian culture.

"These really are wealthy people - they're elite people, rich people - who could afford...to be at least partly covered in gold," said Price. "I always emphasize to people that the mummification process that people might know about - the drying out of the body, covering it in resin - was very expensive. When you go and see these things, you're really seeing the top of society, so you're not getting a snapshot of all of Egyptian civilization, just the top three or four percent of society."

"We pride ourselves on bringing to Western New York world-class science learning experiences," said Wigglesworth. "This is a world-class exhibit, and we are thrilled to be the the U.S. premiere destination. It is a truly immersive experience, and it tells the story of a remarkable peoples at a really quite special period of time."