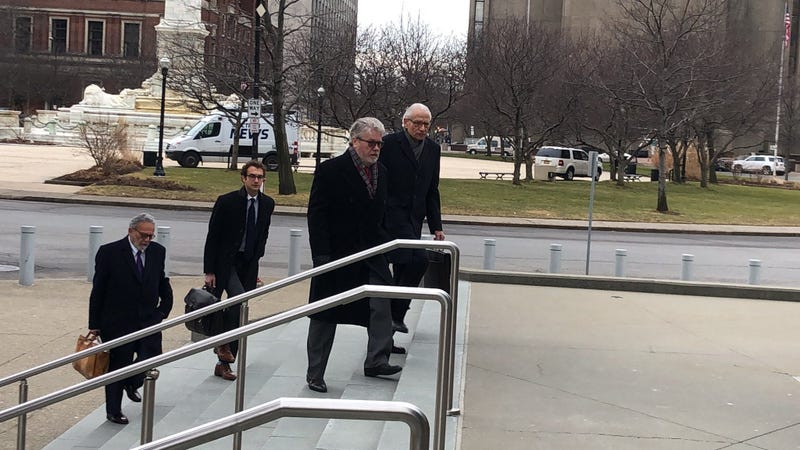 Photo credit Dr. Eugene Gosy arrives at the US Federal Courthouse in Buffalo ahead of his guilty plea on unlawful distribution of drugs and health care fraud. January 7, 2020 (WBEN Photo/Mike Baggerman)
By Mike Baggerman, WBEN

BUFFALO, N.Y. (WBEN) - The guilty plea by Dr. Eugene Gosy came with a mixed reaction from one of the people who took over his Williamsville clinic after he was originally indicted in 2016.

"I did not know Dr. Gosy before I went to the practice," she said. "I never saw one patient where I felt he had done anything in the way he prescribed that was for any reason other than trying to help the patient. That's just an honest assessment.

Nielsen said, though, that Gosy likely would have needed to take a plea deal on the fraud charges.

Gosy admitted in court on Tuesday that he knowingly prescribed drugs to people who were abusing the drugs and even had people in his office who did not have the formal training prescribe the drugs. He also admitted to lying about actively supervising a 2012 refund from a benefits provider when he was actually in Hungary. (Note: At the time of our interview with Nielsen, she did not know the details of the two counts Gosy pled guilty to)

Gosy faces six-and-a-half years in prison when sentenced on May 21.

While the Gosy saga is coming to an end, there are still thousands of people who deal with chronic pain. Nielsen said anyone dealing with chronic pain needs to get an accurate diagnosis and to use opioids only as a last resort.

"If you do go to a doctor and you really need opioids...then make sure that you are aware of the risks of dependence and ultimately, for some people, slipping into misuse," Nielsen said. "Doctors are very aware now that when we use opioids, we have to start slow and use the lowest possible dose for the shortest period of time."

Years ago, opioids were promoted as a "bill of goods" by pharmaceutical companies, according to Nielsen. She said opioids were originally pitched as something that were safe for patients and relatively non-addictive.

"We believed it," she said.