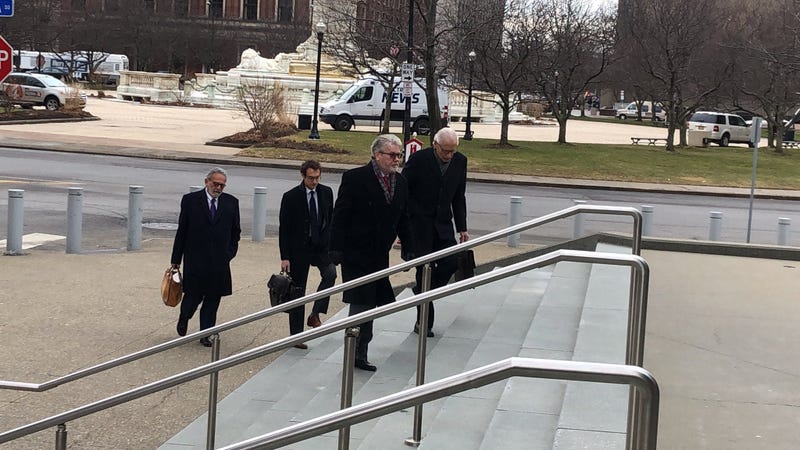 Photo credit Dr. Eugene Gosy arrives at the US Federal Courthouse in Buffalo ahead of his guilty plea on unlawful distribution of drugs and health care fraud. January 7, 2020 (WBEN Photo/Mike Baggerman)
By Mike Baggerman, WBEN

BUFFALO, N.Y. (WBEN) - The Williamsville pain doctor accused of over-prescribing opioids to his patients more than ten years ago plead guilty to two crimes on the day that his lengthy trial was scheduled to begin.

Dr. Eugene Gosy plead guilty in US District Court Tuesday to unlawful distribution of controlled substances and for health care fraud. As part of the plea deal, he will serve six-and-a-half years in prison.

"Recognizing that our fight against the opioid epidemic requires a three-pronged approaching including enforcement, treatment, and prevention, today's plea represents a high-water mark for success in our enforcement efforts," US Attorney James P. Kennedy said. "Although even one death is still too many, we have, through the aggressive prosecutions adopted by this office, we've helped turn the tide on the opioid epidemic in Erie County."

Dr. Gosy arrives to federal court with his attorneys. WBEN is being told there may be a plea this morning. pic.twitter.com/vOWA6BXI70

Beginning in 2006, Gosy, 59, illegally issued prescriptions of morphine, fentanyl, oxycodone, hydrocodone, and other drugs to his patients at his office at 100 College Parkway in Williamsville. Specifically, he admitted that he issued the drugs to some patients without conducting a full examination and even gave drugs to people who he knew were abusing the drugs. He also admitted that members of his staff, who did not receive the formal training to write prescriptions, were issuing re-fills to some patients.

Six patients of Gosy's died as a result of their use of the drugs prescribed by him. He was indicted by federal prosecutors on 166 charges in November 2017, though prosecutors dropped 88 counts against Gosy, mainly for illegal drug distribution, ahead of Tuesday's plea.

Without the plea deal, Gosy would have faced 30 years in prison combined between the two charges. However, prosecutors may have charged him for the deaths of the six patients, which would have added decades onto his sentence and effectively became a life sentence for Gosy.

Kennedy said justice would best be served by allowing for Gosy to plead guilty to the lesser charges.

"This plea holds Dr. Gosy responsible for exactly what he did," Kennedy said. "...It does so without a protracted and expensive trial which would feature a battle of experts and much conflicting evidence. Disagreement provides uncertainty of two federal felony convictions, divest the defendant of his substantial, ill-gotten gains, causes him to lose his DEA registrant so he can no longer prescribe controlled substances, and provides a significant term of incarceration of six-and-a-half years in federal prison for a professional with no prior criminal record."

Kennedy said that while Gosy may have had the best of intentions when he first began prescribing the drugs, he began cutting corners. Prosecutors believe he did this because of the money that he made, which allowed him to purchase cars like a Ford GT and a Ferrari. Gosy forfeited his cars to the government and will have to pay more than $344,000 in restitution as part of his plea agreement.

Gosy had more than 30,000 patients. His defense attorney, Joel Daniels, maintained that not only was Gosy a "good" doctor, he may have been the "best doctor in Western New York".

"Over 2,000 doctors had referred their patients to Dr. Gosy for pain management," Daniels said. "It's very interesting that hardly a day has gone by without us receiving a call, letter, or e-mail from one his former patients telling us how much he has helped them and how much he gave them a chance to live a good life. Many have even said he has saved my life."

Daniels said that the trial would have been "daunting" for everybody because it was expected to last four months. He said that the risk of Gosy being convicted for the deaths of any of the six patients made the plea deal worth taking.

"He is a very, very proud man," Daniels said. "A great doctor. He's a brilliant doctor. It was a very, very tough call for him. You have to weigh the benefits and the risks and say to yourself 'This is probably the best thing I should do to preserve my future'."

Gosy was released until his sentencing on May 21. While he surrendered his DEA license, he did not give up his medical license. He can still practice medicine until he is sentenced.