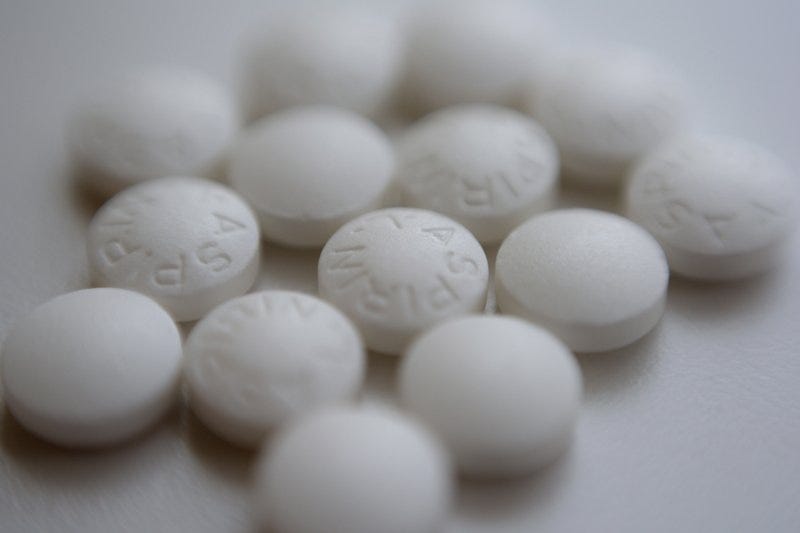 (AP/WBEN) — Millions of people who take aspirin to prevent a heart attack may need to rethink the pill-popping, Harvard researchers reported this week.

"Recent data suggests there is a neutral effect," said Dr. John Canty Jr., Distinguished professor of Medicine at the University at Buffalo.  "If it's something you initiated on your own, maybe it's a good thing to stop and discuss with your doctor".

Guidelines have changed on taking a daily low-dose #aspirin. Dr. John Canty ⁦@UBCommunity⁩ says if you don’t have heart disease, you shouldn’t be taking it. pic.twitter.com/U5gOeR5njm

Canty says data suggests aspirin does not have a major impact in terms of preventing heart attacks with people who do not have established heart disease.  Risks of taking aspirin are well documented. Bleeding is the primary risk.

How many people need to get that message?

Some 29 million people 40 and older were taking an aspirin a day despite having no known heart disease in 2017, the latest data available, according to a new study from Harvard and Beth Israel Deaconess Medical Center. About 6.6 million of them were doing so on their own — a doctor never recommended it.

And nearly half of people over 70 who don't have heart disease — estimated at about 10 million — were taking daily aspirin for prevention, the researchers reported in Annals of Internal Medicine.

"Many patients are confused about this," said Dr. Colin O'Brien, a senior internal medicine resident at Beth Israel who led the study.

After all, for years doctors urged people to leverage aspirin's blood-thinning properties to lower the chances of a first heart attack or stroke. Then last year, three surprising new studies challenged that dogma. Those studies were some of the largest and longest to test aspirin in people at low and moderate risk of a heart attack, and found only marginal benefit if any, especially for older adults. Yet the aspirin users experienced markedly more digestive-tract bleeding, along with some other side effects. .

In March, those findings prompted a change in guidelines from the American Heart Association and American College of Cardiology:

—People over 70 who don't have heart disease — or are younger but at increased risk of bleeding — should avoid daily aspirin for prevention.

—Only certain 40- to 70-year-olds who don't already have heart disease are at high enough risk to warrant 75 to 100 milligrams of aspirin daily, and that's for a doctor to decide.

Nothing has changed for heart attack survivors: Aspirin still is recommended for them.

"Absolutely," said UB's Canty. "There should be no change. You should talk to your doctor if your doctor has prescribed aspirin."

But there's no way to know how many otherwise healthy people got the word about the changed recommendations.

"We hope that more primary care doctors will talk to their patients about aspirin use, and more patients will raise this with their doctors," O'Brien said.