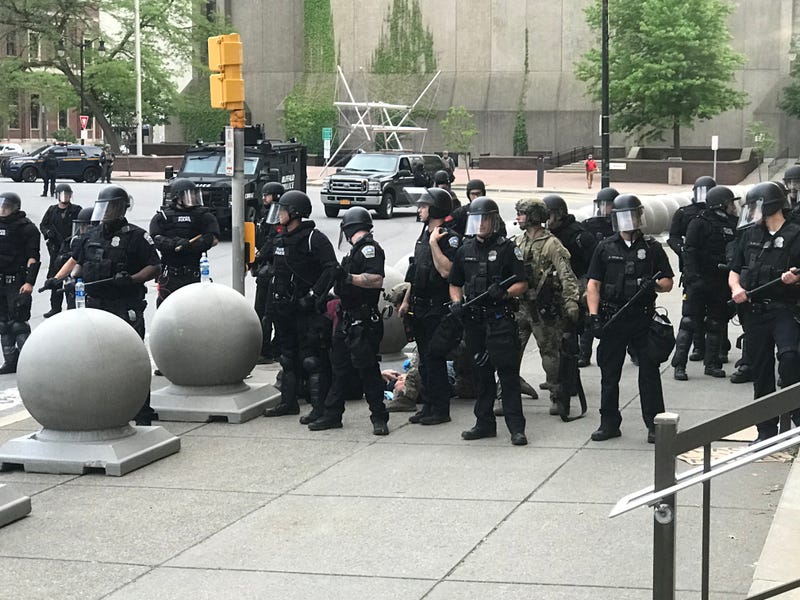 Buffalo, N.Y. (WBEN) - It was a tragic end to a day of demonstrations as an elderly male protester was pushed by Buffalo Police before falling backwards and slamming his head on the concrete sidewalk in front of city hall Thursday evening.

The 75 year old man was taken to ECMC for serious injuries and now two officers have been suspended for their actions leading up to the incident. He is currently in serious but stable condition.

It all occurred as Buffalo Police were sweeping the area of a small group of demonstrators that remained after the 8pm curfew.

Prior to the incident, the man, identified by Dave Greber of WIVB TV as 75 year old Martin Gugino, could be seen facing officers as they were slowly moving toward demonstrators and multiple video accounts show the officers pushed the demonstrator before he fell.  Emergency medical attention was administered to the victim, who was conscious and visibly bleeding, and taken via ambulance for treatment.

An initial police statement said the man "tripped and fell" after a skirmish with police, but video shows only Gugino approaching officers. After he is pushed to the ground, officers continue to walk past him.

The Erie County District Attorney is now investigating the incident.

US Attorney JP Kennedy issued this statement: "Last night, after seeing the video of the incident occurring in front of City Hall, I was concerned and immediately contacted both BPD Commissioner Lockwood and FBI Acting SAC Guyton.  The officers involved have been suspended pending further investigation.  On behalf of the entire law enforcement community, I offer our sincere best wishes to the injured gentleman, as we hope and pray for his speedy and complete recovery. As a community and as a nation, we must resist the urge to react impetuously.  Rather, as we struggle with the disturbing events depicted on that video, I suggest that we reflect on the words of Dr. Martin Luther King, who said: “Darkness cannot drive out darkness; only light can do that. Hate cannot drive out hate; only love can do that. Hate multiplies hate, violence multiplies violence, and toughness multiplies toughness in a descending spiral of destruction…. The chain reaction of evil—hate begetting hate, wars producing more wars—must be broken, or we shall be plunged into the dark abyss of annihilation.”

“Tonight, after a physical altercation between two separate groups of protesters participating in an illegal demonstration beyond the curfew, two Buffalo Police officers knocked down a 75-year-old man. The victim is in stable but serious condition at ECMC. I was deeply disturbed by the video, as was Buffalo Police Commissioner Byron Lockwood. He directed an immediate investigation into the matter, and the two officers have been suspended without pay. After days of peaceful protests and several meetings between myself, Police leadership and members of the community, tonight’s event is disheartening. I hope to continue to build on the progress we have achieved as we work together to address racial injustice and inequity in the City of Buffalo. My thoughts are with the victim tonight.”

Poloncarz has reviewed the videos of the incident and says the man appears to have been 'shoved by police'. "It sickens me," he says.

I've seen videos of the incident in front of Buffalo's City Hall in which an older protester appears to have been shoved by police, fell backwards and suffered a serious head injury. It sickens me. I've confirmed he is at ECMC in stable condition. My thoughts are with him now.

The completely unwarranted use of force by police in front of City Hall last night is a call to action for our city and country. @TheBlackCaucus will soon release legislation addressing equal justice and police brutality.

There is clearly much work to do.

The casual cruelty demonstrated by Buffalo police officers tonight is gut-wrenching and unacceptable. Suspensions and an investigation are already in order, but there is little more we have to see to know what took place. Police officers cannot continue to hide behind the lie that they are protecting and serving. City leaders need to take this as a wake-up call and seriously address the police violence during this week’s protest and the culture of impunity that led to this incident. There is no place for military-geared police to enforce a curfew by inflicting violence on the very people they are supposed to protect. We are in solidarity with Buffalo’s protesters and demand that demonstrators can protest without the threat of police brutality on the streets tomorrow.

As a result of Thursday's demonstrations, four people were arrested on disorderly conduct charges for blocking traffic in the Square and a 5th person was arrested during a skirmish with other protestors and also charged with disorderly conduct.

The tragic end to a day of demonstrations came after a small contingent gathered on the steps of Buffalo city hall agreed with police to peacefully leave at 8:05pm. As most protesters slowly exited the sidewalk in front of city hall, a handful of angry demonstrators were shouting obscenities at one another and refusing to leave when Buffalo Police began to make their slow advance across Niagara Square to clear the sidewalk of those remaining.

Demonstrations were active in Niagara Square most of the afternoon as a rally was held that featured Buffalo Mayor Byron Brown at one point who issued an order for Buffalo Police to cease any use of 'choke-hold' tactics.

Protesters left Niagara Square during the dinner hour and marched up the streets of Allentown and winding through the Elmwood and Delaware districts before ending their formal gathering with an eight minute moment of silence in Johnson Park.

Protesters march through the streets of Allentown in Buffalo

It was following the Johnson Park demonstration when some of the protesters made their way back to city hall in advance of the 8pm curfew.