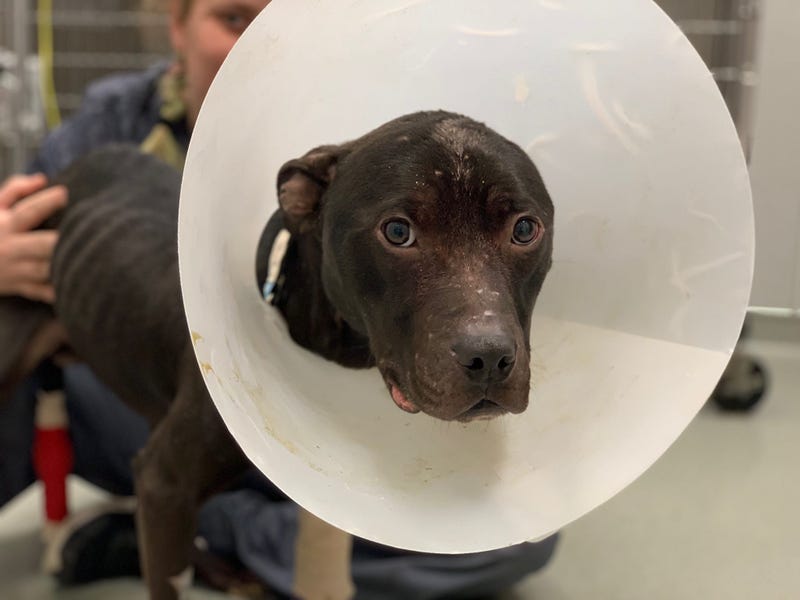 "While he seems happy on the outside and is wagging his tail and seems to be responding externally, we still need to be concerned internally," said Browning.  "Dr Chevalier informed us that he's not recreating these platelets on his own".

There is a chance Browning said that the dog could crash within minutes or within a week.  "That's hard to hear when you're so emotionally invested."

Charlie is also sporting a fashionable cone around his head to allow open sores to heal.

The heartbreaking story unfolded Tuesday morning.  The pitbull mix was found during garbage pick-up at a private residence in the Walden - Bailey area of Buffalo.  Buffalo sanitation workers made the discovery.   The low outdoor temperature in Buffalo Tuesday morning was 1 degree.

Rescuers gave him the name "Charlie" and rushed him to the SPCA Serving Erie County.  The emaciated dog could barely stand or hold his head-up.   His body temperature was 90.  A normal range is 101 to 102.5.  Charlie responded quickly to IV's and other fluids and his tail began wagging non-stop.

The community reacted with outrage.  Thousands of people started following the story on social media.

Browning says they are investigating the case and are actively accepting tips, even anonymous tips.

"This is not an accidental situation, this is a dog who couldn't pick his head up. There was intentional action here and we're trying to get to the bottom of it," said Browning.

Anyone with information in the case should call the SPCA Serving Erie County at 875-7360.  Ask for an Officer or Dispatch Operator.