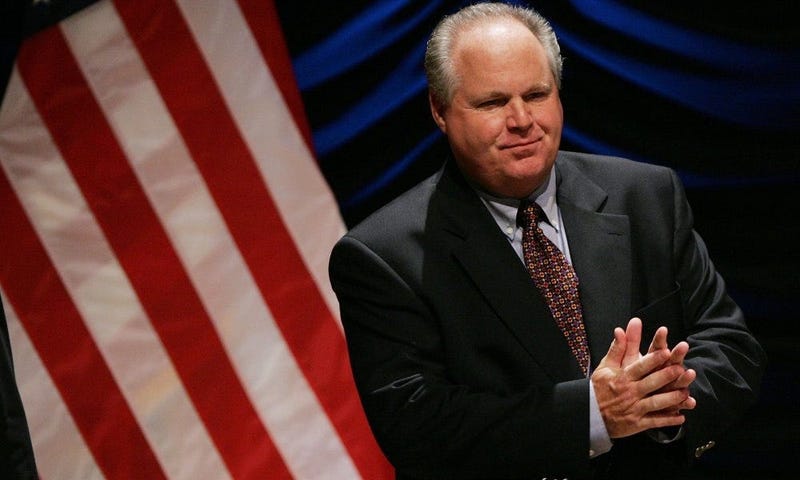 He said he intends to still host his show during his treatment, though there will be some days that he will not host it.

"(I plan to) do this show as normally and as competently and as expertly as I do each and every day because that is the source of my greatest satisfaction professionally," Limbaugh said. "(and) personally. I've had so much support from family and friends during this that it's been tremendous. I told the staff today that I have a deeply personal relationship with God that I do not proselytize about. But I do and I have been working that relationship tremendously, which I do regularly anyway, but I've been focused on it intently for the past couple of weeks."

Limbaugh said on his radio show that he first felt that something was wrong around January 12. He first learned of his diagnosis on January 20 by two professional medical institutions. He said he is feeling zero symptoms but acknowledged a shortness of breath and a pulmonary problem.

"I'm going to be gone the next couple of days as we figure out the treatment course of action and have further testing done, but as I said, I'm going to be here as often as I can," Limbaugh said.

He was reluctant to discuss personal matters and distract from his work, he said, and wasn't seeking to cover up his illness. He realized it was better to be honest and avoid the speculation that would follow when he has to miss being on air for treatment or as the result of treatment, Limbaugh added.

“But it is what it is. And you know me, I’m the mayor of Realville,” he said. “My intention is to come here every day I can. And to do this program as normally” and competently as usual.

“It’s shocking to the industry, and it should be shocking to the political establishment,” Michael Harrison, publisher of Talkers magazine, the trade industry publication for talk radio, said of Limbaugh's disclosure.

The hyper-partisan broadcaster has dominated talk radio with a raucous, liberal-bashing style that made him one of the most influential voices of American right-wing politics and inspired other conservative broadcasters including Sean Hannity, Glenn Beck and Bill O'Reilly.

The media figure's endorsement and friendship is a conservative political treasure. His idol, Ronald Reagan, wrote a letter that Limbaugh read on the air in December 1992 and which sealed his reputation among conservatives: “You’ve become the number one voice for conservatism in our country,” Reagan wrote.

Two years later, Limbaugh would be so widely credited as key to Republicans’ takeover of Congress for the first time in 40 years, he was deemed an honorary member of the new class.

Limbaugh has frequently been accused of hate-filled speech, including bigotry and blatant racism through his comments and sketches such as "Barack the Magic Negro," a song featured on his show that said Obama "makes guilty whites feel good" and that the politician is “black, but not authentically.”

His popularity has survived brickbats and thrived despite personal woes.

In 2003, Limbaugh admitted an addiction to painkillers and entered rehabilitation. Authorities opened an investigation into alleged "doctor shopping," saying he received up to 2,000 pills from four doctors over a period of six months, but he ultimately reached a deal with prosecutors that dismissed the single charge.