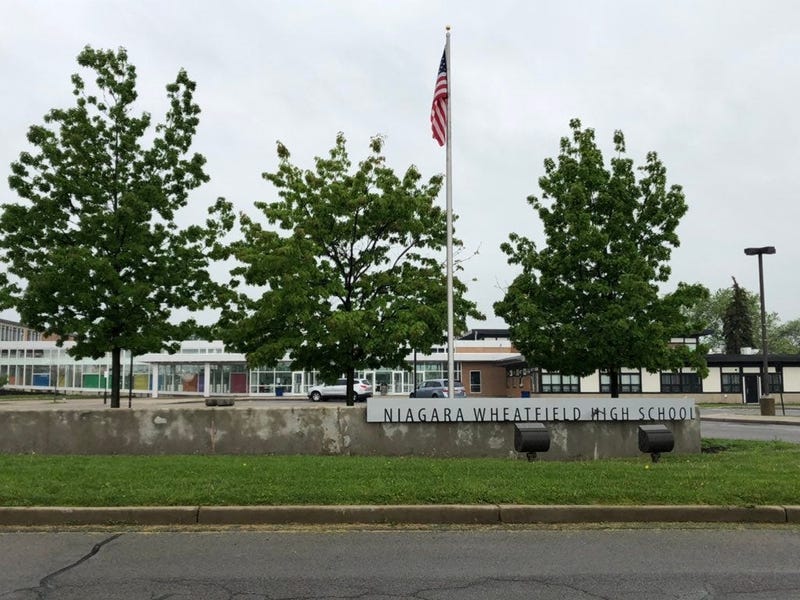 SANBORN (WBEN - Brendan Keany) - After several students were suspended due to last Friday's walkout demonstration at Niagara Wheatfield High School, the public packed a school board meeting to share their outrage with the school's administration.

Students were protesting the handling of a rape case involving two students from the school, as a male was convicted on Thursday, May 23, of raping a female student, but the district maintains that they didn't know of the conviction until Thursday, May 30. While the rapist was then removed from the school upon notification, community members and parents are outraged that the school didn't take a more active role in following up on the case and subsequently allowed the convicted rapist to attend school in the days following the conviction.

Leslie Camp is the mother of the rape victim, and she spoke at Wednesday night's school board meeting:

Astonishingly powerful scene at tonight’s board meeting at Niagara Wheatfield High School. The mother of the victim read a statement from her daughter in front of the board. @NewsRadio930 pic.twitter.com/iOInPatnPs

When students learned of what happened, they organized a walkout protest during the school day on Friday, but were apparently met with aggressive rebukes from school administrators, particularly the principal, Michael Mann.

One student spoke before Wednesday's board meeting, saying the actions taken by the school to oppress the demonstration were nothing short of hypocritical.

"I think it sends a message totally against what they teach us, which is to speak up for what's right, and when we try to do that, that's when they try to silence us because now we're against them," he said.

Cindy Halleen is the mother of two student who participated in the protest, and she gave a passionate speech in front of the board on why the administration's actions that day were unacceptable.

"I found it very disturbing because they were trying to stand up for a classmate who had something horrific happen to her," said Halleen, who also serves as a teacher in another school district. "On top of it, when I reflected back at the district's website and looked at the principal's website, there were four pillars, and two of the pillars were 'empathy' and 'respect.' These kids had shown empathy and were trying to be respectful of a classmate, and that was not returned to them."

"I kind of see that there is a little bit of a divide, maybe, between the the administration and the board," said Camp. "The board was actually able to apologize - something that I was trying to get the superintendent to do, and he could barely look me in the eye."

Camp also discussed the emotional toll it took for her to read her daughter's statement.

"That was one of the most difficult things that I've ever had to do in my life was just read in her own words the violation, and how she felt and the disrespect from the entire school all year long," Camp began. "She didn't get the protection she deserved."

In the middle of the meeting, Camp called for the resignation of Principal Mann, a statement that was met with applause and cheers from the rest of the packed meeting room. While there is procedure to be taken care of before any such action could take place, the public appeared very interested in making sure that Mann is removed in some fashion.

music
Old Dominion's Matthew Ramsey suffers multiple injuries after accident
music
Chris Martin of Coldplay is still trying to clear his name at the supermarket job he worked in the 90s
news
McDonald's to debut new asparagus burger in Germany
music
Revisit Miley Cyrus' amazing Mother's Day tribute on 'Saturday Night Live'
music
Amid outcry, NBC says it will not air Golden Globes in 2022
music
Why is Saweetie performing for tips on the boardwalk?