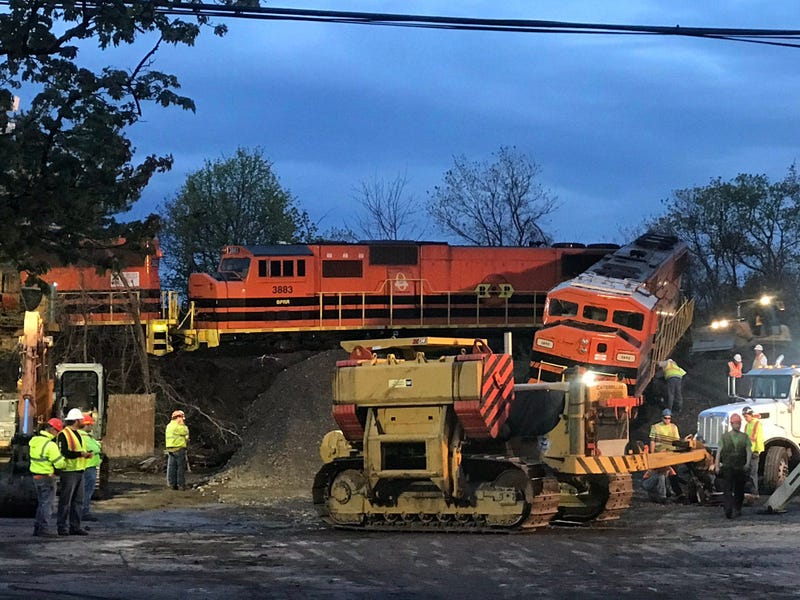 East Aurora, N.Y. (WBEN) - It looks like the scene from a movie in the village of East Aurora following a dramatic derailment of a freight train overnight in the center of the village.

According to the East Aurora Police Department, a Buffalo Pittsburgh Railroad train was derailed at the intersection of Main Street and Elm Street in East Aurora Monday night.

Approximately 15 of 98 cars on the train going from Salamanca to Buffalo were derailed and could be seen spread out around a confined area area. Three of the derailed train vehicles were giant bright orange locomotives, including the lead locomotive of the train. Additional derailed cars included tankers carrying asphalt that were not full at the time of the incident.

Local residents say the derailment could be felt and heard from their homes.

"My house and windows were shaking so bad it sounded like a plane coming down and we ran," Susan Clapp said. "The diesel smell was strong."

East Aurora Police Chief Shane Krieger says it was in fact diesel that spilled from the crash and told WBEN on the scene Tuesday morning the 41 homes that were evacuated as a precaution are now cleared to be returned to.

"Nobody was injured", said Krieger on the scene.

"The only fluid leaking from the train right now was diesel from the engine that was completely off the tracks," Krieger said. "That has been contained."