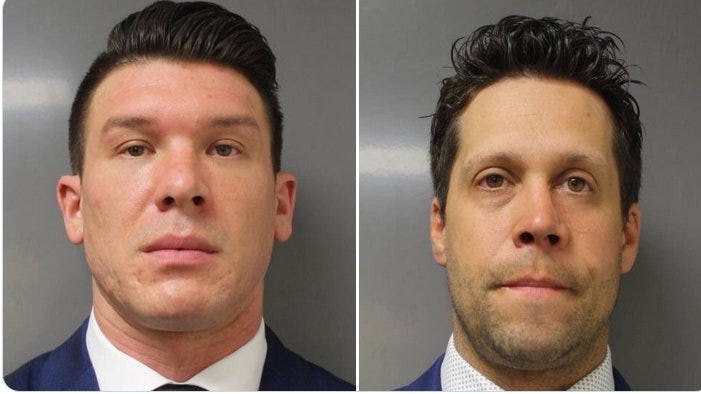 Photo credit Robert McCabe (left) and Aaron Torgalski mugshot. The two Buffalo Police officers were charged with second degree assault on June 6, 2020 after a push on June 4 of 75-year-old Martin Gugino that left him bloodied when he struck concrete. (Photo: ECDA)
By WBEN Newsroom, WBEN

Officers Robert McCabe and Aaron Torgalski plead not guilty to second-degree assault in a virtual arraignment in Buffalo City Court. The two have been released and will return to Erie County Court on July 20 for a felony hearing.

The two officers were part of the department's riot team that was clearing protesters out of Niagara Square when elderly demonstrator Martin Gugino approached them in front of Buffalo City Hall. Gugino was told to move by authorities and was shoved by the two officers, McCabe using a baton and Torgalski with his right hand. Gugino backpedaled after the shove, fell, and smashed his head against the concrete sidewalk, where he began to bleed.

"That's ridiculous," Flynn said. "I'm not choosing sides. I'm prosecuting 39 protesters. There's no sides here that I'm choosing...I'm on this country's side. That's whose side I'm on. I'm on justice's side. All I'm doing is my job."

The charges against the two officers are felonies due to Gugino's age. Flynn cited a state law that allows for felonies to be levvied against anyone who is ten years younger than a victim age 65 and above. Torgalski and Gugino are ages 39 and 32, respectively.

Flynn drew parallels to his successful case against former Erie County Sheriff's Deputy Ken Achtyl, who was convicted of assault last year after he bloodied at man outside of a Buffalo Bills tailgate. Similar to that case, Flynn said both officers in Thursday's incident were reckless.

"The analysis that the grand jury is going to have to consider is whether or not there was intent to cause physical injury here," Flynn said. "That's the legal analysis here. I think there is, obviously."

Flynn said the other option that Buffalo Police should have considered was to arrest him, instead of shoving him.

As the officers left central booking, cheers erupted outside where police and fire union members had gathered in a mass to support the two officers.

The officers had been suspended without pay. All 57 members of the department's emergency response team have resigned under guidance from the union.

The district attorney said the two officers could have been charged with the crimes on Friday afternoon. He held off on charging them because of the large protests that were ongoing in the City of Buffalo and had concerns about "pouring gasoline on the fire". McCabe and Torgalski surrendered themselves on Saturday morning.

Late Saturday, Buffalo Mayor Byron Brown issues a statement(full statement below), saying; "As a community we must continue to bridge the gap between our law enforcement personnel and the many residents and peaceful protestors who I believe all want the same thing: a safe and equitable society, systematic reforms to eliminate prejudice and bias, and a prosperous and unified City of Buffalo."

"These last few weeks have obviously been a very challenging time not only for our city and community, but for our entire nation, as we grapple with some very critical issues," said Police Commissioner Byron Lockwood. "My officers have been through, and continue to work through, one of the most difficult times in our history. I stand by the men and women of the Buffalo Police Department and I'm proud of how they have handled the vast majority of the situations and encounters that they have faced. I hope and pray that we can all work and grow together as we move forward in the City of Buffalo."

This morning two suspended Buffalo Police Department officers were arraigned by the Erie County DistrictAttorney on assault in the second degree class D felony charges for their conduct in an extremely unfortunatealtercation involving a citizen protester in Niagara Square this past Thursday evening. As I have repeatedlysaid, my administration believes in due process for the officers. I also continue to pray for the full recoveryof the injured person.

As a community we must continue to bridge the gap between our law enforcement personnel and themany residents and peaceful protestors who I believe all want the same thing: a safe and equitable society,systematic reforms to eliminate prejudice and bias, and a prosperous and unified City of Buffalo. Thismoment has certainly presented yet another opportunity for us to reflect on how we as a society maintainfree speech and promote public safety, while implementing and advancing a community-centered mindsetamongst all those who protect and serve.

In reflecting on this situation, my administration believes this as an opportunity for the Buffalo PoliceDepartment to reform and further progress into the Community Police Officer Model that CommissionerLockwood has been steadfastly implementing. I have directed the Commissioner to further engage thecommunity, as I do the same, so that we can collaboratively and expeditiously realize our shared vision ofa Police Department in which every officer is truly a community police officer, with the health, safety, andwelfare of our community at the forefront of every decision made by every officer.

Since first taking office, my administration has worked to improve city government—particularly theBuffalo Police and Fire Departments—in order to create a culture and structure that is reflective of theneighborhoods, districts, and community that these institutions care for. This effort has included manychanges to policing leadership, diversity, procedures, programs, and approaches. And while the work isnowhere near complete, the City of Buffalo has been committed to this positive transformation for many,many years, and it will be an even more urgent focus for us all. My administration pledges to continuemeeting with and learning from community groups and citizen activists, as we did again today and in theyears leading up to this moment.