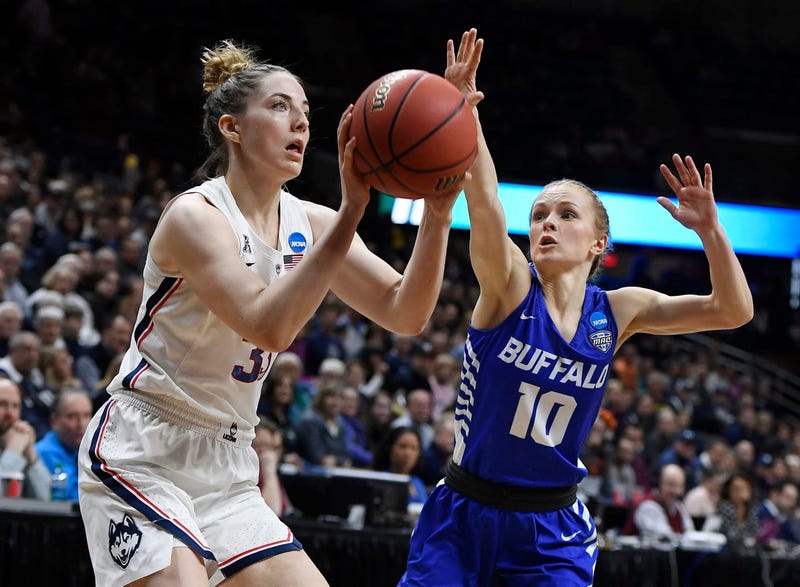 STORRS, Conn. (WBEN/AP) — UConn doesn't normally have to grind out wins early in the NCAA Tournament, but found itself doing just that against 10th-seeded Buffalo.

The second-seeded Huskies, a program that had won its previous 25 second-round matchups by an average of 29 points, held off the Bulls 84-72 on Sunday to move into the Sweet 16 for a 26th straight season.

"It's a razor-thin margin that we operate with this year," coach Geno Auriemma said.

It was UConn's closest game in the second round since a two-point victory over Xavier in 1999. The next closest was a 15-point win over TCU in 2003.

Cierra Dillard, the nation's second leading scorer, had 29 points for Buffalo, which made a big run in the fourth quarter but could not overcome a 24-point second-half deficit. Autumn Jones added 14 points for the Mid-American Conference champions, who finish the season 24-10.

Buffalo fell behind 15-0, never led and trailed 73-49 with 3 minutes left in the third quarter. But the scrappy Bulls would not go away. They outscored the Huskies 12-2 to open the fourth, cutting the lead to 75-67.

Their hopes of a comeback were dealt a blow in the middle of that run when Dillard went down after rolling her right ankle in a collision with Collier. She had to be helped off the court, but came back into the game less than two minutes later, scoring five more points while clearly hobbled.

"My team's down, my team needs me," said Dillard. "I'm coming back out. I don't care if I have to hop on one leg. I went to the back corner, made sure I could run on it; tightened up my tape job and got back out there."

It was just the fifth time this season UConn has allowed an opponent to 70 points or more. The Huskies are 4-1 in those games.

"It's been kind of that type of year for us where things just don't naturally happen the way they have before and for us that's good preparation," she said. "That shows that when things go wrong, when things happen, we can always pick up what we need to do and pick up from the next person down."

Buffalo: Dillard, a transfer from Massachusetts, finishes her college career with 2,205 points, including 1,422 in her two years at Buffalo, good enough for fifth place on the school's all-time scoring list. She came into the game averaging more than 25 points and just under five rebounds and six assists. She had seven rebounds and seven assists on Sunday, scoring more points than any other UConn opponent this season.

UConn: Collier, who has averaged 27 points and 13 8 rebounds over the last five games, came up two assists shy of a triple-double. The double-double was her fifth straight, 22nd this season and 46th of her career. She moved past Tina Charles into third place on UConn's scoring list with 2,349 points. She trails only Maya Moore (3,036) and Breanna Stewart (2,676).

There were 45 fouls called in the game, 24 on UConn and 21 on Buffalo. The Bulls Brittany Morrison picked up four, including a technical, in the first half, but didn't foul out until there were 45 seconds left in the game, finishing with nine points and 10 rebounds. Six other players finished with four fouls.

The Bulls' 25 offensive rebounds were the most the Huskies have allowed all season. In two NCAA Tournament games, opponents are averaging 23 offensive boards per game.

Buffalo coach Felisha Leggett-Jack, whose team includes nine underclassmen and seven freshmen, said her program made a statement in the loss.

"I think we really went out there and did a tremendous job of getting the respect of the nation," she said. "Five more minutes and I don't know what would have happened."

Samuelson and Collier, UConn's two seniors, have played their entire careers without losing a game on their home floor, going 59-0.

"It something that not a lot of people get to do," Collier said. "It holds a lot of pride for us."

UConn will play the winner of Monday night's game between UCLA and Maryland in the Sweet 16.