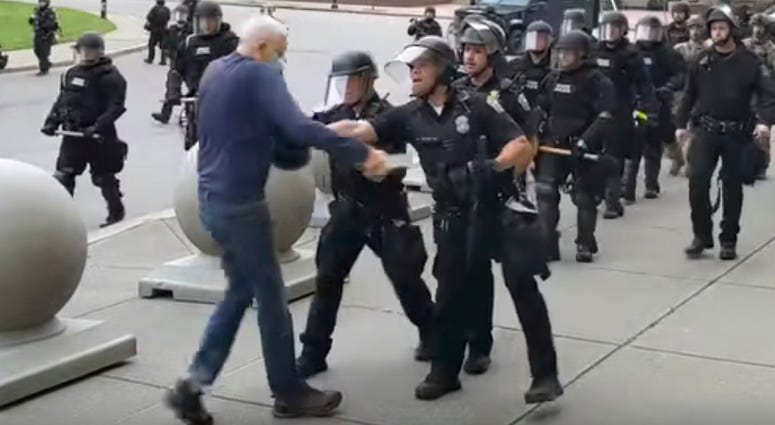 Martin Gugino, the 75-year-old protester, approached the officers in front of Buffalo City Hall. After orders to move back that were not immediately followed, McCabe pushed Gugino with the baton and Torgalski pushed with his right hand.

Gugino fell and cracked his head on the concrete sidewalk in front of Buffalo City Hall. The sequence of events in the video lasted six seconds.

McCabe and Torgalski were both charged on Saturday with felony assault and could spend up to seven years in prison if convicted. The incident has split reaction from people who believe that McCabe and Torgalski had no reason to shove the man and from the police union who argue that the city and the district attorney is trying to “f*ck over these guys”.

It is unclear what the exact policy is for Buffalo Police’s ERT in riot situations. However, there are questions within the community about why police in riot gear needed to advance on a group of 12 protesters who were not causing a scene at Niagara Square, though there were arrests earlier in the evening.

“My take on it would be Niagara Square was the location that was given where the protests were going to take place,” Rivera said. “If people are running around saying it’s a peaceful protest…I don’t think so. I think at that given time, there wasn’t anything happening.”

But Rivera cited past cases where police needed to respond, such as when a rioter set City Hall on fire, when a woman was pulled out of her car and beaten outside of the federal courthouse, people smashing windows, and also rioters who set a van on fire.

“At that given time there may not have been anything happening but there’s always the propensity for it,” Rivera said. “So you always have to stay situationally aware. You have to be alert. You’re not going to put your guard down and you’re definitely not going to say we only have 50 police officers with 25 protesters or 10 protesters. That’s not the point. The point is they’re there to form a line, to keep people moving, to keep people going, and that is the main function of control.”

Erie County District Attorney John Flynn said the two officers were reckless in their conduct and should have turned Gugino around to arrest him rather than shove him. Rivera argued that the push was to simply get Gugino to move in a direction, rather than to cause harm.

After Gugino’s head hit the sidewalk, McCabe crouched down to check on him but he was immediately lifted up by an officer behind him to continue moving in the line. Rivera said it’s McCabe’s job to keep the line moving and any medical treatment is done by those who are behind the line.

“The line continues and maintains its integrity and it moves forward,” he said. “That’s how you move the crowd. You can’t break it up because somebody’s down and say ‘okay we’re going to stop the line, let’s take care of what we have here.’ The line has to move.”

Some believe the mere presence of police at gatherings is enough to escalate a situation. Buffalo Police significantly decreased their attendance during the protests last weekend and there were no major incidents that occurred despite there being more than 1,000 demonstrators marching throughout the city.

“De-escalation is a big issue,” Rivera said. “Officers are always taught to verbally de-escalate and calm things down. You don’t want to argue with someone and escalate the situation and make it worse. Nobody’s in this to get hurt, I got to put that right out there.”

Rivera disagreed, though, that a lack of police will de-escalate a situation. He said a large police presence is necessary in case the area is overrun and chaos breaks out among the crowds.

“I’m not saying everyone in the circle had an agenda to do something but there’s always that propensity,” Rivera said.

Rivera said the situation was going well up to the point of the Gugino incident and that there will sometimes tragic incidents.

“It doesn’t have to dictate what happens in Buffalo with our relations between community and the police. It doesn’t.”

Reforms of the police department are back in the public eye. Flynn said that if McCabe and Torgalski were following the proper training guidelines then there needs to be change for training.