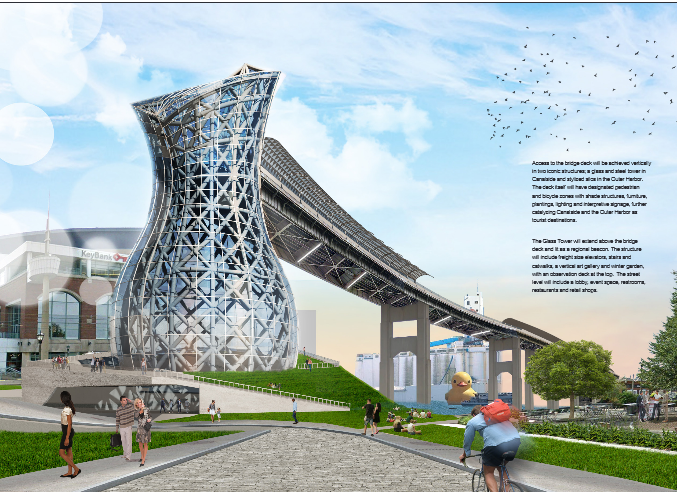 The competition, which began earlier this year, saw more than 100 submissions. The submissions were narrowed down to nine on Monday night.

Design groups made their final pitch to the selecting jury on Tuesday morning at Seneca One.

SWBR Architect's design would remove both ends of the Skyway and use the remaining portion of the road as the "SkyPark", which would provide panoramic views for pedestrians and cyclists along a one-mile stretch of the former Skyway. It would add 12 acres for development between the Outer Harbor and Canalside.

The Canalside end of the Skyway would include a vase-shaped bridge deck that includes an art gallery, greenhouse, plus retail, restaurants, and event spaces. The opposite end would create the "new silos", a mixed-use building with an amphitheatre and food bazaar on the ground floor, a cultural and technology center on the second floor, and a boutique hotel with a green roof and observation deck on top.

There would be additional road improvements in the Skyway corridor, including streetscape projects on Louisiana Street and Hamburg Street. SWBR also designed new lift bridges and other amenities.

All told, SWBR's design is a $340 million project that estimates a five-phase construction that would end in 2032.

State officials still need to conduct multiple studies on the Skyway before any official construction can take place. Governor Andrew Cuomo pledged $10 million for the initial environmental impact study on the corridor.

"Is taking down the Skyway a good idea? Of course it is," Cuomo said. "It was a good idea 50 years ago when it was first proposed."

Cuomo said that the project will get done.

"Is it going to be hard to take it down? Yes," Cuomo said. "But I have news for you. No great accomplishments are easy. Nothing transformative in life is easy. If you're not willing to step up and take on the big challenge, then you are destined to fail from the beginning."