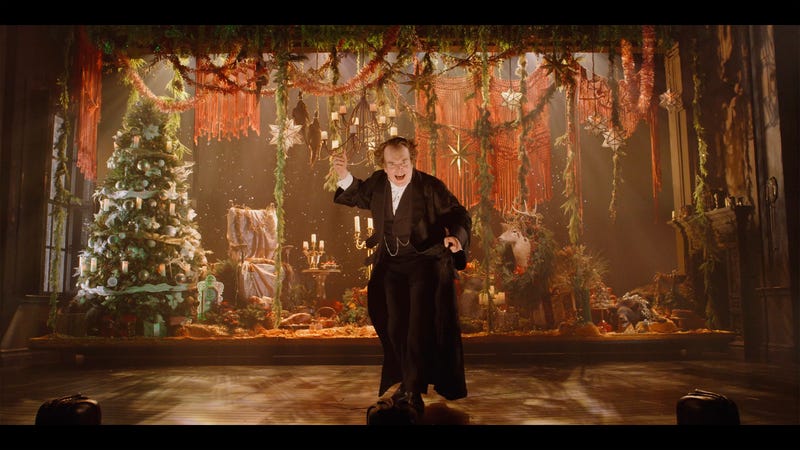 NEW YORK (AP) — There's theater on Broadway. You just have to adjust your sights.

More than a hundred blocks north of Manhattan's shuttered theater district but on that same famed thoroughfare, an actor recently read his lines from a huge stage.

But there was no applause. Instead, all that was heard was a strange command for the theater: “And cut!”

Tony Award-winner Jefferson Mays was performing multiple roles for a high-tech “A Christmas Carol” that was being filmed for streaming this month at the empty 3,000-seat United Palace.

The one-man show is an example of how many who work in theater are increasingly defying COVID-19 by refusing to let it stop their art, often creating new hybrid forms.

“Because it’s such a roll-up-your-sleeves business, theater people figure it out,” said Tony Award-winning producer Hunter Arnold, while watching Mays onstage. “Of everything I’ve ever done in my life, it’s the place where people lead from ‘how?’ instead of leading from ‘why not?’”

The coronavirus pandemic shut down theater and the TV/movie industries in the spring. Film and TV production have slowly resumed. Live theater is uniquely tested by the virus, one reason it will be among the last sectors to return to normal. Props and costumes are usually touched by dozens each night, an orchestra is crammed into a pit, backstage areas are small and shared, and audiences are usually packed into seats. New ways are needed.

Mays' “A Christmas Carol,” which was filmed on a high-tech LED set, veers much more filmic than most other streaming theater options and is raising money for suffering regional theaters — one stage production helping others during the pandemic.

Other green shoots include radio plays, virtual readings, online variety shows and drive-in experiences that combine live singing with movies. The cast of the musical “Diana” reunited on Broadway to film the show for Netflix before it opens on Broadway.