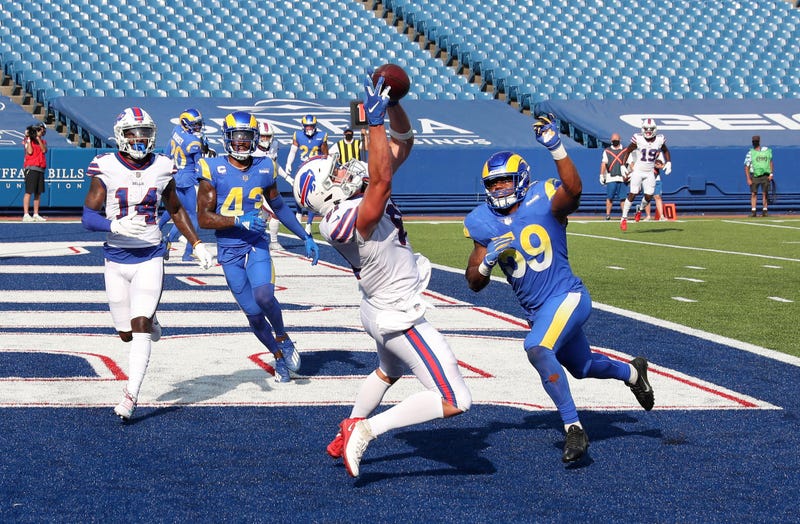 Orchard Park, NY (WBEN) - With the Bills off to a hot start, one of the top questions on every fan's mind is when they will be allowed to go to a game again.

Before the season began, the team announced that there would be no fans allowed to attend the two September home games, but there is still no official word on if fans will or won't be admitted starting in October.

"With other teams around the country being able to do it in some capacity like that, I would say that proves it can be done," said former Bills receiver and current radio color analyst Steve Tasker, who has been one of the few people able to see a game inside the stadium this year. "The Bills are ready to take that challenge on if they get the opportunity."

The team's next home game is scheduled for Thursday October 15 against Kansas City in a prime time matchup, and it appears that the team is getting ready for the possibility fans will be allowed at that time. During Sunday's game, signs on the Bills Stadium scoreboards showed messages promoting social distancing, sticking with your group, and how to safely enter and exit the stadium.

"The team has done everything they can to prove that they can hold at least some fans in the stadium safely," Tasker said. "I would not be surprised if there are going to be fans in the stands for some of these games. Kansas City may not be in the cards... It's not up to (the Bills). They have to wait until the powers that be give them permission to do that."

Lieutenant Governor Kathy Hochul on Monday said she does not know when there will be an announcement on fans returning to the stadium.

"We're still in a pandemic," Hochul said. "We have been in regular communication with all the professional sports teams in the state of New York, particularly the Bills. They've been in contact with our administration. Some of the organizations just aren't comfortable themselves. They want to make sure they can protect the players as well as the fans and they have to ensure there are certain protocols met. Not every organization is doing that."

There are also concerns that allowing fans into the stadium could set a precedent on the number of people who are allowed in a place. Currently, gatherings are limited to a maximum of 50 people, though different industries are allowed different capacities based on state guidelines.

"What happens with that dynamic?" Hochul pondered. "...The industry is having conversations as we speak with the Department of Health. Those conversations are continuing...I just don't have an answer today."