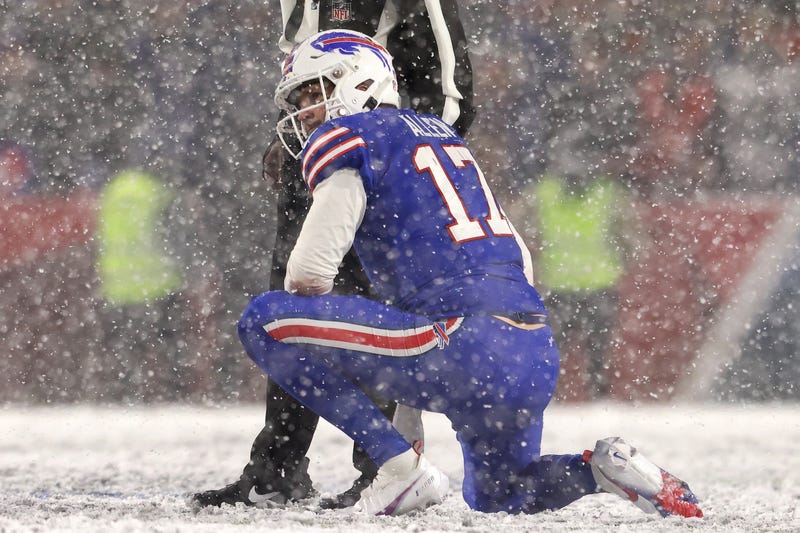 Orchard Park, N.Y. (WBEN) - The 2022 season ended with a whimper for the Buffalo Bills, as they were dominated from start-to-finish against the Cincinnati Bengals in the AFC Divisional Round.

The Bengals used an efficient performance from quarterback Joe Burrow to demoralize the confidence of the Buffalo defense, while a sturdy Cincinnati pass rush was able to do enough to disrupt Bills quarterback Josh Allen and the offensive rhythm.

With the 27-10 win, the Bengals advance to the AFC Championship Game next Sunday in Kansas City against the Chiefs in a rematch of 2021 that went the way of Cincinnati.

As for the Bills, it'll now be another offseason filled with some questions and uncertainties despite a 13-3 finish to the regular season. For many Bills fans, it was another disappointing end to a once promising season.

"We are season ticket holders, we came all this way. We had much bigger plans and aspirations, and just feel let down," said Bills fan Morgan from Florida.

"Definitely some things to work on, but I wouldn't say anything that we're not capable of fixing quickly in the offseason," said Bills fan Christian from Rochester. "I mean, we're right up there, it didn't go our way today. But, I mean, on to August. I'll be there right at St. John Fisher."

"I think the [offensive] line let us down a little bit, didn't give us enough time. We got a quarterback that can run the ball, but he just wasn't able to hit his people today. And I think we showed a little bit of volatility throughout the season," added Bills fan Earl from Tennessee. "We're a good team. Got a good a solid defense, probably not a strong we need to beat. ... I'm a little worried, to be honest. I thought this was our year. Last year should have been our year too. And, damn, I think it'll be tough for the next couple of years, especially with that Joe Burrow on that Bengals team. Geez, he's gonna be a problem the next few years."

The 2022 season was one filled with adversity for the Bills. Whether it was the happenings in the city with the Tops mass shooting back in May, or what took place on the field like the Damar Hamlin medical emergency three weeks ago, the team faced a number of challenges over the course of the year.

Despite the adversity and the ending of the season on Sunday, many Bills fans will still reflect on the year as a positive one in Western New York.

"This year was a great year. We had too many side effects that were happening. It was all over the place," said Bills fan Ameer from Buffalo. "We lost too many guys that were injured. Von Miller was one of them, Poyer. It was a lot to take in."

"Everything that Buffalo has gone through on the field, off the field, it's been tough," added Christian. "We've had our fair share of injuries, so I think we've done the best at what we were capable of doing. Today wasn't our day, but rest up, recover, get back at it next season."

While many fans still saw the 2022 season as a good year for the Bills, fans like Earl admitted there was an incredible amount of volatility with this group.

"When we won games, we were thinking, 'Damn glad we won the game, but we could have lost it in so many different ways,'" Earl said. "We've got great players, but we've got players that can win and lose games in a heartbeat. That don't provide you too much security as a Bills fan, but it's the nature being a Bills fan. It's exciting, always exciting."

For some Bills fans, a loss such as Sunday's to the Bengals may have deterred their confidence in the leadership group and the rest of the team starting at the top going forward. But for a number of fans, it'll be important to keep the band together with the hopes of making another run at the Super Bowl during the 2023 season.

"We're diehard fans, and we're very confident in the team and the trajectory. We just hope for better results, and it's not something that's going to happen overnight," Morgan said. "We're in it for the long haul, but we thought this was our year and it wasn't."

"It's the playoffs, this team was in the Super Bowl last year. Obviously it was gonna be a tough game. To put two good teams up against each other, it's bound to be tough," Christian added. "There's a couple of things you can look at, maybe nitpick a little bit, but I'd say generally, no. It doesn't waver my confidence."

As for what the team can change up or improve upon in 2023, it may not be so much of changes to the personnel. Some fans may just want to see the Bills become more of a robust team in all facets of the game.

"I think we made some [defensive] mistakes at the beginning of this game. It should've been man-to-man coverage and they were playing zone. Just didn't make too much sense," Earl said. "When you come across a technician such as Burrow, he's going to hit his guy, no problem. You mark the guy, you've got a chance. We didn't do that, and so we gotta get smart. Simple as that."

Some Bills fans like Christian feel its all about further building on the chemistry that's already in place in the Buffalo locker room.

"Younger guys becoming second-year guys, using that [offensive] line in the draft. Those are all things we can work on," Christian said. "It's really just making sure we keep that bond from this year going, and take a step forward next year."

And for some fans, it's still the hope of winning the ultimate prize come next February in New Orleans.

With the season now over and four teams remaining in the playoff picture - Bengals, Chiefs, San Francisco 49ers and Philadelphia Eagles - some fans may cling on to a certain team for the final games of the postseason, eventually culminating in a Super Bowl victory.

While some fans may be done watching football from this point going forward, others will continue to watch this NFL postseason, but just watch for the entertainment or sports betting aspect.

"I don't care about who wins. As long as the [New England] Patriots are not in it, or [Tom] Brady's in it, I'm good with that," Ameer said. "But now that K.C. is the new Patriots, it's going to be hard for me to watch, because it's like, 'Are they going to win or are they going to lose?' I just want somebody to win that has not been on the winning side forever and ever and ever."

However, despite beating the Bills and ending their season abruptly, some fans will be turning to the underdog Bengals the rest of the way, as they look to win their first Super Bowl title in franchise history.

"The Bengals, you might say, they're our neighbors. We don't dislike them. We like them, honestly we respect football from Ohio," Earl said. "So I wish Bengals best of luck. In a way, I kind of hope they do it."