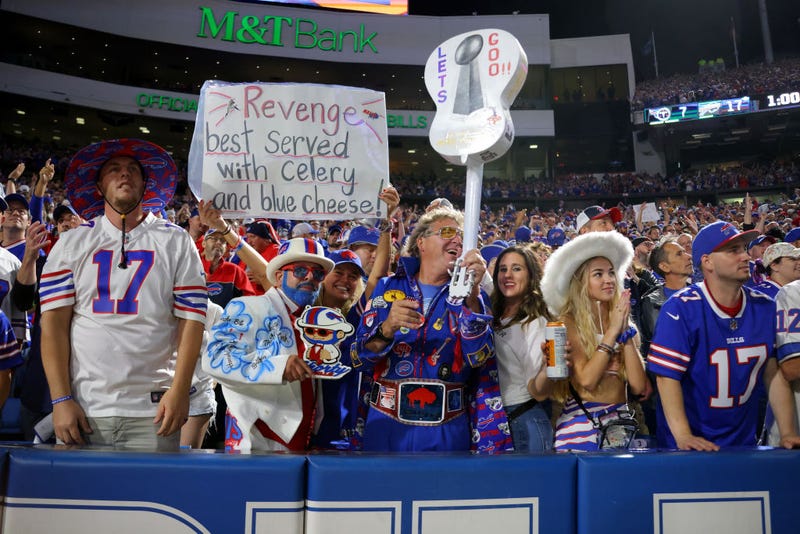 Orchard Park, N.Y. (WBEN) - "From whistle-to-whistle, that was a domination right there."

The Buffalo Bills improved to 2-0 on the early 2022 season with a dominating 41-7 win over the Tennessee Titans on "Monday Night Football" at Highmark Stadium.

After the Bills went into halftime with a 17-7 lead, Buffalo blew the game wide-open in the third quarter with 24 points scored. This included a pair of passing touchdowns between Josh Allen and Stefon Diggs - two of three total between the two - and a pick-six touchdown by linebacker Matt Milano.

In-Depth: All Bills in 41-7 Monday night trouncing of the Titans

Monday night's performance was one that many Bills fans in attendance will remember for a long time.

"I hardly have ever seen it, and I've come 35 years with [my husband]. So this is amazing. I love it!," said Bills fan Stephanie from Depew.

"This is the biggest home opener shellacking I've seen in a hot minute," added Bills fan Pat Shine traveling all the way from Maryland to catch the game in Orchard Park. "I remember I came here to see Josh Allen, his first start against the [Los Angeles] Chargers in his rookie year, and it wasn't anything like this. Then the next week after that, he was jumping over Anthony Barr in Minnesota. But no, this is incredible. This is this environment, this whole city, this whole area has been waiting for a team like this for a very long time. And I'm very happy that they have it now. I mean, I'm right there with him. It's incredible."

There were a number of performances that stood out from Monday night's win over the Titans. Of course, it was the Allen-to-Diggs connection that owned the night in Orchard Park, with Diggs finishing the night with 12 receptions for 148 yards on 14 targets.

While the offense was clicking for most of the night, the defense was also up to the test, especially stopping All-Pro running back Derrick Henry on the ground.

"They look really good this year," said Bills fan Joe traveling up from Baltimore, Maryland for the game. "What I notice is a big improvement is our interior defensive line stopping the run. Henry didn't have much, much room tonight. And then just Diggs and Allen are on just a different level. It's amazing."

Henry was shut down on the ground for the Titans on Monday, rushing for just 25 yards on 13 carries, but he did score Tennessee's lone touchdown in the first quarter.

As for Allen, his night was over in the third quarter when the game was well out of reach. The fifth-year quarterback finished the game with 26 completions on 38 passing attempts for 317 yards and four passing touchdowns.

"17's not here for the victories and the wins and losses. He's here for the people, he's the man of the people," said Bills fan Jeff from Rochester. "He sat on top of his throne tonight, and the scoreboard told the rest."

Throughout the night, fans were actively cheering "M-V-P" for Allen, as the Titans had no answers to stop the 2018 first-round pick of the Bills. For Townsley, it's a good feeling to know the Bills have one of the best quarterbacks in the NFL.

"The chatter's here, second in MVP [voting] two years ago. I think this is the time," he said. "I mean, lights out, four touchdowns, over 300 yards passing, no turnovers. So keep it up, I like his odds. It means a lot to have a great leader on our team."

As the Bills get out to their hot start for the 2022 season, Week 3 will bring Buffalo's first divisional challenge of the year against the Miami Dolphins at Hard Rock Stadium.

Miami is off to a good start to their 2022 season, as well, getting out to a 2-0 start with season-opening wins over the New England Patriots and Baltimore Ravens. Just this past Sunday, the Dolphins mounted a remarkable comeback in Baltimore, beating the Ravens, 42-38 after trailing 35-14 to start the fourth quarter.

Despite the hot start for the Dolphins, Bills fans are not concerned with what Miami is bringing to Sunday's matchup in South Florida.

"We're going to Miami this week, so I was a little nervous [Sunday]," Stephanie said. "Now I'm not nervous anymore. I feel good. I think they're going to do well."

While the Bills dominated in their victory on Monday, the team did suffer a couple of significant injuries to the secondary in the win. Cornerback Dane Jackson needed to be taken off the field via ambulance late in the second quarter with a neck/head injury, while Micah Hyde also left the game in the third quarter with a similar injury.

Despite the injuries, Shine is not too worried about the implications that could have going against the likes of Jaylen Waddle and Tyreek Hill.

"I am a little bit worried about Micah Hyde being hurt tonight, and Dane Jackson getting hurt tonight. It did worry me, but you've got to have faith in the coaching staff. The coaching has been great," Shine said. "I mean, they've got two rookie cornerbacks right now, and Kaiir Elam, his big thing was he couldn't tackle when he came out of college and he's tackling Derrick Henry in the backfield right now. And Christian Benford too, he's a Baltimore acad as well, being from Maryland and whatnot. He's very scrappy, and he's tackling Derrick Henry in the backfield, as well. I mean, you don't get a lot of rookie cornerbacks doing that in the league."

Meanwhile, Jeff has some additional advice for the Bills heading into their matchup in Miami:

"I would just think that maybe the guys, they've been in the Fieldhouse a little bit longer. They should pick up the SPF, because we don't want to get sunburned. We've got a long season ahead."