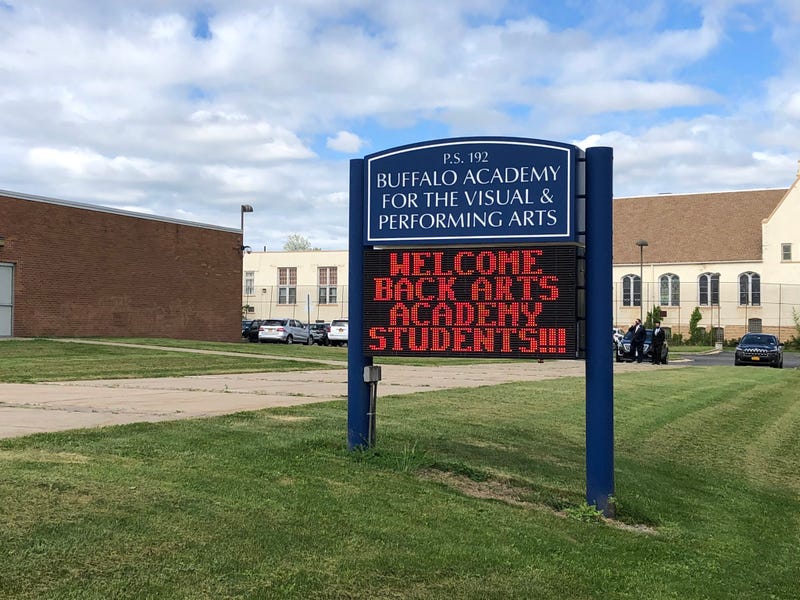 Buffalo Academy for the Visual and Performing Arts. May 27, 2021 Photo credit WBEN/Mike Baggerman
By Mike Baggerman

BUFFALO, N.Y. (WBEN) - Buffalo Schools and state lawmakers in the region touted "historic and unmatched" state funding for the school district during the 2021-2022 school year on Thursday.

Buffalo Schools Superintendent Kriner Cash and state lawmakers are announcing “record state funding” for the district. BPS will receive $814.7M from the state, a more than $76 million increase from the year before. pic.twitter.com/XMULc9UslW

The district has a proposed budget of $972.5 million and will receive $814.7 million in aid from New York State, an increase of more than $76 million from last year. It includes a $43 million increase in foundation aid, the money that most districts use for expenditures and accounts for more than two-thirds of what districts receive annually. Buffalo Schools is also receiving $16.5 million for universal pre-K.

Further details on what the district plans to do with the money will be announced next month during three communities meetings which the district is legally obligated to provide.

"We can't do this alone," Superintendent Kriner Cash said. "We live in a village. We live in one of America's great, great cities. What I've learned and seen is that we've got to stop bashing the brand. You've got to stop bashing the Buffalo Public Schools because this is the single greatest institution you have in this city. You never hear me bash other institutions."

The district also plans to use the money to recover from the pandemic. To do that, Cash said the district will create partnerships within the community.

"There's acute poverty in Buffalo for decades," Cash said. "We haven't done enough to take a big enough bite out of it. It's poverty by design, and I'm not (going to criticize you) today, but I'm going to come back to you if you keep putting that narrative out that's it's only the Buffalo Public Schools that's the worst thing happening here, I'm going to come at you."

Cash said economic segregation is by design, saying there's not enough diversity in the workplace, income equality, and said too many people cannot access resources that are available to others.