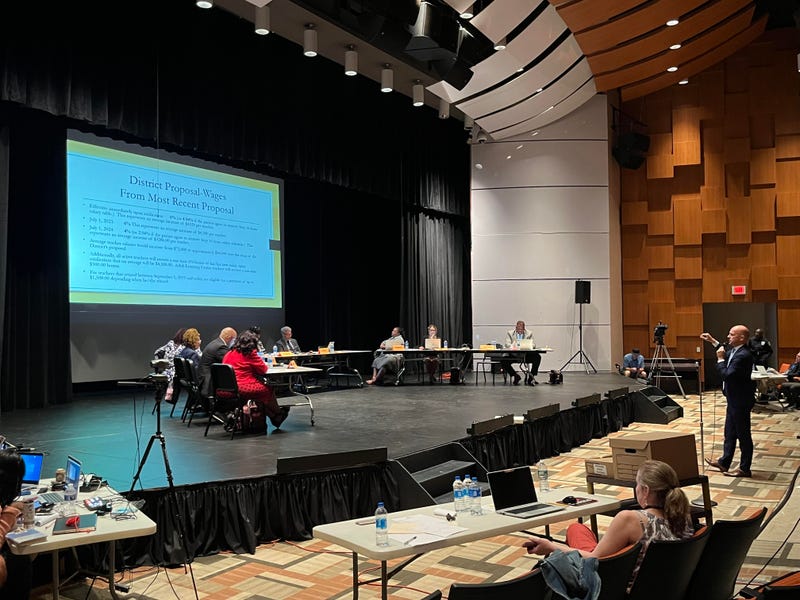 Buffalo, N.Y. (WBEN) - It was another signature marathon meeting and a lot covered at the Buffalo Public Schools Board of Education meeting Wednesday evening.

A mass of teachers gathered inside the auditorium of Buffalo Academy for Visual and Performing Arts for the session. When it came time for public comment, Buffalo Teachers Federation President Phil Rumore addressed the board with a very direct message for the board.

"We are still here even after three years of devastating inflation. Without even a very sound honorable offer. Teachers are angry and they should be," Rumore opens.

The fact finder that came into access the contracts says that they can't negotiate until mid-October but Rumore says that that's not good enough.

NOW: BPS Teachers are asking for fair contracts now after BTF President Phil Rumore spoke before the BOE and have filed out of the auditorium in solidarity. pic.twitter.com/GT4ZtQlV27

After Rumore's comments, over 100 teachers got up and walked out of the auditorium, most of them chanting "FAIR CONTRACTS NOW." Some teachers stayed, out of protest for the 'scare tactics' of the BTF and some parents were there saying, 'What about the kids?'

Miss Williams, an 8-year-old girl who attends a Buffalo Public School addressed the board after and said, "I was kind of upset the way the teachers walked out like that because if a student walked out of the classroom mad and upset they would get in trouble for walking out of the classroom when the teacher was speaking. I understand they were mad and upset but they can't just walk out."

Buffalo parent Edward Speidel says Rumore needs to stay in his lane, "Board, please negotiate a contract and do what's best for the children. Phil, you're in charge of the union, you don't speak for parents."

Buffalo Public Schools Superintendent Dr. Tonja Williams responded, "It's a mutual respect we have between one another, we want our teachers to have a fair contract, but I just want to say negotiating requires some give and take."

Kyle Kuzma, General Counsel for Buffalo Public Schools and chief negotiator highlighted the latest offer the made to BTF, including a $12,000 salary increase and a one-time bonus as well as shortening their salary steps, which were much longer than suburban schools in the area. Kuzma says BTF is asking for an unattainable 10% salary increase each year through 2025-26.

About four and half hours into the meeting, the board voted to pass a pilot program for reimbursing parents to drive their kids to school, this is one of the many multi-faceted approached the board has taken with discussions from their committee dedicated on this issue to combat the school bus driver shortage that still plagues the nation.

Board member Larry Scott was the only one who opposed, saying that it does not benefit the parents who need it the most and throwing more money at the problem wouldn't solve anything.

Board members Paulette Woods, Kathy Evans-Brown and Sharon Belton-Cottman stressed an idea brought up by a parent during public discussion, the board needs to continue to "think outside the box" and prevent students from standing outside in the cold, waiting for the bus to maybe show up.

This program could be implemented as early as mid-November and parents could be reimbursed for 62 cents a mile.