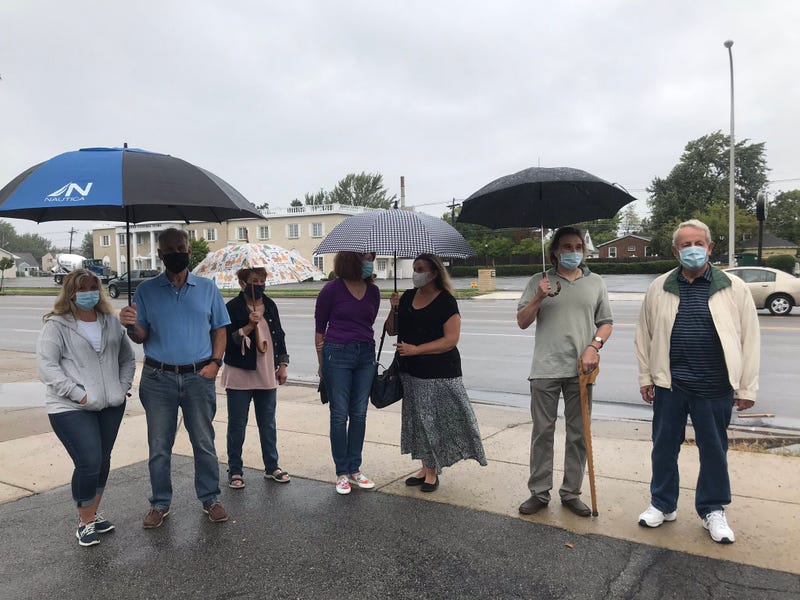 Tonawanda residents stand outside the Sheridan Park Crematory operated by Amigone Funeral Home and call for the operation to be shut down. Photo credit WBEN Photo

“Something has gone wrong and a full investigation must be launched and completed,” said Ryan as he stood alongside town officials and residents across the street from the Sheridan Drive facility Sunday morning. Ryan thanks the DEC for quickly opening an investigation and notes that a preliminary finding of the probe shows the crematory reached an excessive temperature last week and Ryans says it happened, “as a result of multiple bodies being piled in at one time.”

In a statement released to WBEN, the Sheridan Park Crematory says reports of multiple bodies being cremated are simply false and goes on to say the facility “follows all laws and regulations of cremation, which includes only a single body per cremation. Furthermore, the configuration and size of a cremator chamber does not allow for, or accommodate, more than one body.”

This latest incident was brought to light as Tonawanda council member Shannon Patch saw the plume of black smoke rising from the facility and stopped to take a photograph.  For Patch, a temporary suspension is not enough.  Patch joins with residents in saying the facility should be shut down permanently.

1/3 TB member @Shannon_Patch noticed something that obviously wasn’t right earlier today. She sent me the pic below of what she saw at the Amigone Crematory. I immediately contacted the DEC who had had someone out to the site within a hours to investigate. Late this afternoon pic.twitter.com/GWbfK1guRR

“This has been a controversial location for this crematorium for more than 30 years,” said Ryan, who notes the facility was shut down in 2012 and after a series of lawsuits was reopened in 2018 with a condition that state of the art pollution control measures were in place that addressed pollution, noise and odor concerns.

“But just two years later, a catastrophic failure of the system last week caused that black smoke to be released into the air for over an hour,” Ryan stated.

Sheridan Park says this is the first such incident since the state of the art pollution control were implemented in 2016 and a full investigation is underway.