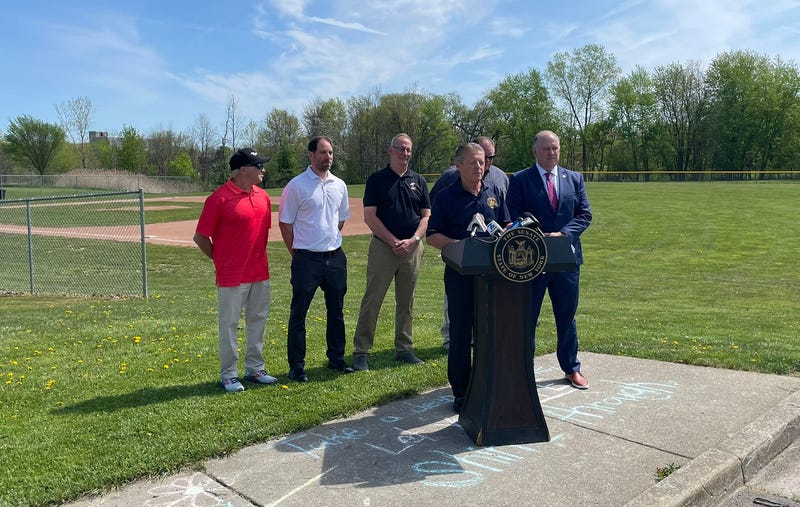 West Seneca, N.Y. (WBEN) - Some help from the New York State Legislature could be coming to better protect referees, umpires, judges and other sports officials from cases of excessive harassment and assault while on the job.

State Senator Patrick Gallivan and Assemblyman Bill Conrad were in West Seneca on Friday to introduce legislation that would modify the state’s penal law governing harassment and aggravated assault to include youth, interscholastic, collegiate, amateur and professional sports officials.

This piece of legislation would also require the State Education Department to establish a spectator information campaign for schools to utilize throughout the year.

"We're trying to deal with three particular areas. First, elevating penalties for harassment of a sports official. Second, elevating penalties for the assault of a sports official. And, perhaps, the most important part of it of all is requiring the State Education Department to put together educational materials that will ultimately be required to be distributed at the beginning of the season for all leagues. Whether it's amateur, whether it's little leagues, whether it's interscholastic, and yes, even professional would apply to that," said Senator Gallivan on Friday.

"This is applicable year-round when kids and families and adults in recreation leagues come out and participate in various sports. One of the things that all of these sports have in common is the sports officials. The umpires, the referees, the other officials who are part of the game to try to ensure that the rules are fairly and properly enforced, and that the activity is safe for everybody involved. Unfortunately, though, across the country and here in Western New York, too many officials have become victims of harassment or assault."

"No official should feel endangered by a fan, player or coach when they're simply doing the job they were enlisted to do," said Assemblyman Conrad. "The rise in harassment and assaults is also leading to a shortage of people willing to take on this role. We all can face that we have a teacher shortage coming, but we're also facing an officials shortage, where we can't get decent people to come out and ref. We're relying on coaches or parents at the last minute. It's becoming a problem, and we want to have that opportunity available."

A National Association of Sports Officials survey from 2017 - consisting of more than 17,000 referees, umpires and sports officials from across the country - found that 48% of male officials had felt unsafe or feared for their safety, because of behavior of a coach, parent or player. The survey also showed some 45% of female officials felt the same way.

So how different would the penalties be for anyone who happens to egregiously harass or abuse sports officials with this new proposed bill?

"It creates a section titled 'aggravated harassment of a sports official,' and it takes harassment, in general terms as normally a violation, this elevates it to a Class 'B' misdemeanor," Senator Gallivan explained. "The typical assault of an individual, where with intent to injure somebody or cause the injury, that's typically a misdemeanor. This will elevate it to a felony."

The proposed legislation would bring New York in line with 33 other states that have either created specific protections within the law or recognized the unique role carried out by sports officials.

Hear more from both Senator Gallivan and Assemblyman Conrad in the player below: