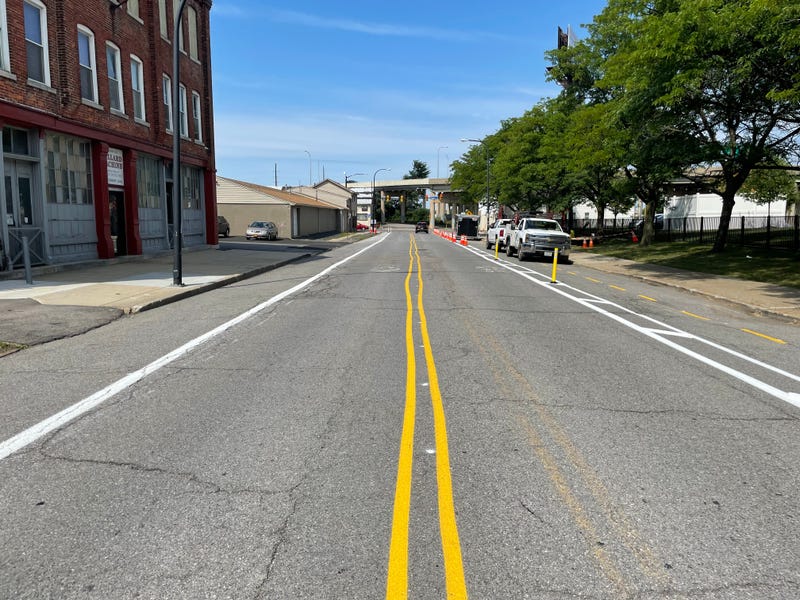 Buffalo, N.Y. - Road lines on Forest Avenue appear a bit squiggly after being painted on by GObike Buffalo, as they work to provide safe travel ways for drivers, bikers and pedestrians alike in the City of Buffalo. Photo credit Brayton J. Wilson - WBEN
By Brayton J. Wilson, WBEN.com Newsroom

Buffalo, N.Y. (WBEN) - If you have traveled down Forest Avenue over the last several days or plan on heading that direction some time soon, you may notice the center lines of the road are a bit squiggly, being uneven and going off in all sorts of directions.

The road lines have taken off on social media, with a number of people pointing out the lines.

As it turns out, the makeshift paint job was the work of GObike Buffalo, who's currently working on Forest Avenue identifying viable travel options for bikers, pedestrians and motorists alike between Niagara Street and Rees Street.

Get ready for a fully transformed Forest Ave from Rees to Niagara!
The DO NOT STAND signs are in place along the northern parking lane, because it's about to be a new 2-way cycle track!
(It's temporary so use it this summer and fall, push for it permanently next year) pic.twitter.com/2pdMb1vzmN

"The corridor has been identified in the Buffalo Bicycle Master Plan as an important East-West connection. Many of our existing pathways are North-South - Niagara Street, the Empire State Trail being a good example," said Justin Booth - Executive Director of GObike Buffalo.

"The current installation is a temporary project, so it is simply meant to last for the season to test out this new configuration, see how it works. [We'll] collect the data after the installation to determine its efficacy, and we'll continue to do the community engagement, because what we found is that many people have not seen what other cities are doing to slow vehicle speeds down, improve pedestrian bicycle safety. We'll test it out, see how it works, let people experience it and touch it in real time. Then once this is all completed at the end of the season, we'll have a full report to give back to the City for them to consider making it permanent."

GObike Buffalo has been working in collaboration with the City of Buffalo, as well as the Department of Public Works and members of the Buffalo Common Council. One of the goals for the group has been to identify and build a network of routes to connect people to meaningful destinations in the City.

"The Bicycle and Pedestrian Board, they work together with our Public Works Department in the planning and design of these bike lanes with the thought in mind of making it safer, enable people to walk, to bicycle," said Common Council member David Rivera. "I think it just adds to the safety of the general public, and I think that's very important. If you can add to the public safety, I think it's worth it." 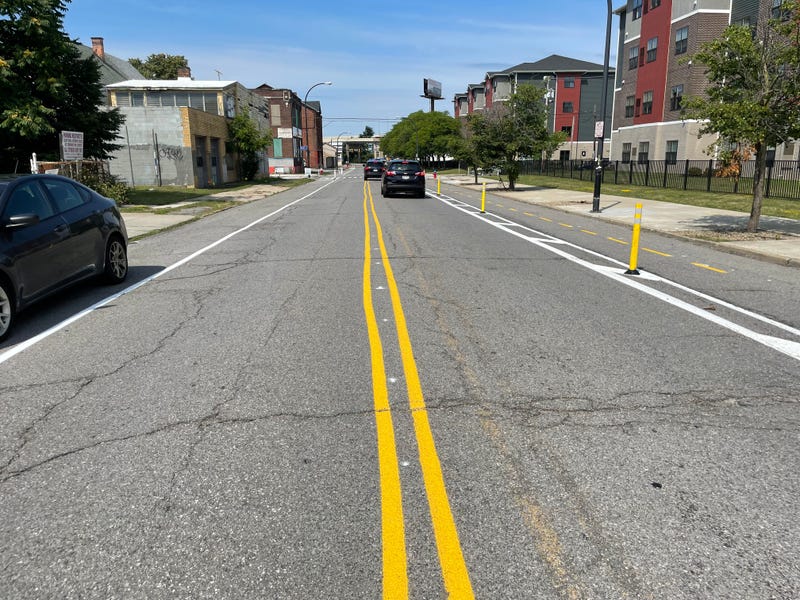 Buffalo, N.Y. - Road lines on Forest Avenue appear a bit squiggly after being painted on by GObike Buffalo, as they work to provide safe travel ways for drivers, bikers and pedestrians alike in the City of Buffalo. Photo credit Brayton J. Wilson - WBEN

As time has gone on, the road lines on Forest Avenue have faded, which has caused some treacherous travel for drivers, cyclists and pedestrians. Since the lack of visible road lines were creating a public hazard, it was important for the folks at GObike Buffalo to add new lines for the safety of everyone.

"We did some very simple things," Booth said. "Standard width of streets in the City of Buffalo are 11 feet, so we striped the travel lanes at 11 feet. We added a two-way protected bike lane, we put bump outs at the intersection, we painted crosswalks and stop bars along there. I will say that because the street's in rough shape and because of fast drivers, the double yellow there is wonky. We fully own that."

Booth adds the group just got a new machine with a double nozzle, so eventually they will go back out there and re-stripe the double yellow line.

"We certainly want to make sure that it looks better going forward," he said. "This is all meant to just test out these new treatments and make sure that the public feels safe on the roadway, no matter how they choose to travel."

What you may also notice going through Forest Avenue is a protected bike lane, which is a two-way bike lane on the North side of the street with a two-foot buffer. It also has plastic delineator posts to provide that separation for the cyclists and motorists. That was implemented by GObike Buffalo as part of their assessment of the roadway.

"We've seen in cities across the country, when they've installed these types of facilities, not only does it make it safer for cyclists and for a much larger population to enjoy riding on the streets that is separated from vehicles, we've also seen it improve safety for all other users, including drivers because they're going more slowly," Booth said. 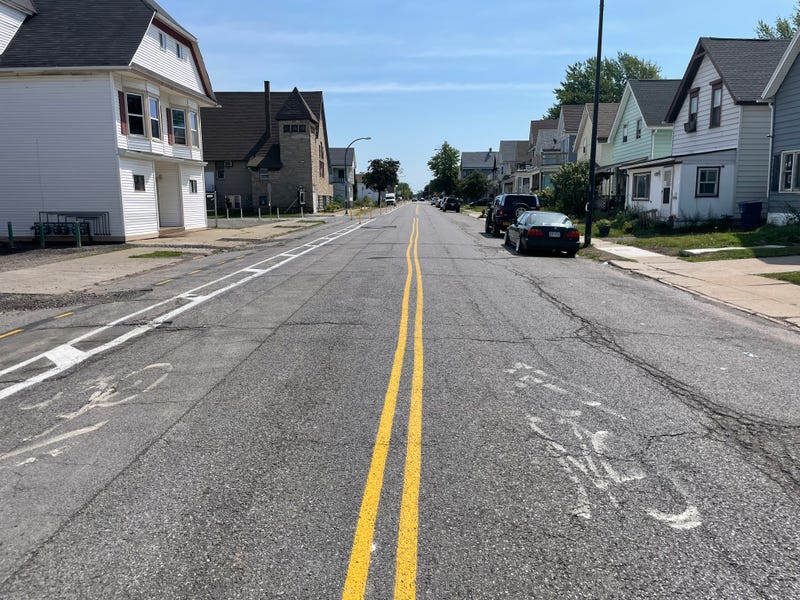 Buffalo, N.Y. - Road lines on Forest Avenue appear a bit squiggly after being painted on by GObike Buffalo, as they work to provide safe travel ways for drivers, bikers and pedestrians alike in the City of Buffalo. Photo credit Brayton J. Wilson - WBEN

When it comes to adding this bike space around the City of Buffalo, Councilman Rivera believes it is a positive enhancement for cyclists, while also providing extra safety measures for drivers.

"The City is more pedestrian friendly, bicycle friendly. That was part of Complete Streets that we passed back in 2007, which enables striping for bicyclists, for pedestrians, for traffic throughout the City of Buffalo to make it safe for anybody that traverses through the City of Buffalo," Rivera said. "Whether they're bicyclists, whether they're handicapped, whether they're pedestrians, we want to make sure the streets are safe. That's one other way to calm traffic, as well. The bike lanes, the crosswalks and all the striping that goes. It does reduce speeding, and we're hoping that's one way of conditioning people to slow down a little bit."

"When we look at any project build, the No. 1 thing that we hear from communities, no matter where or what people are in, is they want cars to slow down," Booth added. "They want cars to go the speed limits, they want cars to stop at stop signs. No. 1, that is what we're doing. If we are successful in doing that, we make the streets safer for cyclists."

While both Booth and Rivera know they can't put bike paths and other safe travel lanes on every street in the City of Buffalo, they want to make sure that the consideration of everyone is being taken serious when projects like this are in the works.

"We'll work with the general public, we're listening to them as well," Rivera said. "We hope that they're patient and see how these lanes work out. If they don't work out, we can always go back. These are only lanes that are [temporarily] striped, and we can, perhaps, change it with the input of our Public Works Department."

"For many people, the adjacent neighborhood streets function very well as a good way to get from Point A to Point B, but some of our main corridors, or East-West connections, are business districts. People want to get to these locations and be able to do it safely," Booth added. "Whether it's for health, whether it is for supporting economic vibrancy in business districts, or whether it's simply for the environment, reducing greenhouse gas emissions from the transportation sector, all these things build quality of life.

"We've seen city-after-city that quality of life is the currency of the future. If we invest in good quality of life in our communities, we attract more people to be here and we just raise the tide for all boats to move up. That's what our goal is here."

As for the extra attention of the squiggly lines on social media, Booth acknowledges that the publicity is a good thing for their cause.

"It's bringing attention to the project, and that's essentially what our goal is," he said. "We want to do more real-time installations. We're in a time where we're seeing bicycle-pedestrian crashes at a 40-year high, and we need to make immediate improvements on our roadways to make people feel safe. So simply by adding some paint on the streets to test these things out, to slow cars down and to collect the data that demonstrates whether or not it did work.

"If people are slowing down to laugh at our wiggly lines right now, so be it. It's getting them to get a chuckle out of the work, and drive a little bit more carefully."