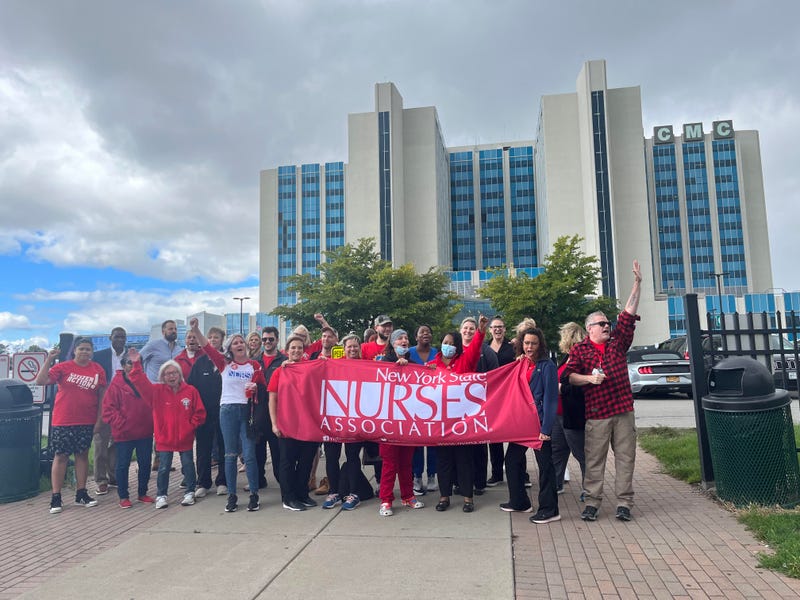 Buffalo, N.Y. (WBEN) - A little rain didn't stop the members of the New York State Nurses Association workers standing outside of the Erie County Medical Center in protest calling for safe staffing and a fair contract.

The contracts are set to expire at the end of this year for the NYSNA and for their 1,300 registered members.

Steve Bailey, registered nurse and director Western New York regional director of the New York State Nurses Association says the need proper tools to do their jobs and have adequate staffing, "We learned that decades of cuts to staffing no matter what they call it, lean staffing, just in time staffing [or] staff challenge, it all left us unprepared, unsafe. Over 60% of our members contracted COVID. We had to take to the streets all over New York State to beg for PPE (personal protective equipment). Nurses were wearing garbage bags for PPE in some parts of the state. Nurses were afraid to go home to their families. We will not allow a poorly prioritized budget to force us into delivering substandard and yes, dangerous care."

Negotiations begin today between ECMC and the group, We will not allow you to take things back to pre COVID where we'll just be waiting for the next crisis. We're going to build a workplace and a profession that is stronger than ever. Whether whatever. We're willing to fight for these things because they're right and just," Bailey says.

Crystal Knihinicki, an 8-year ECMC RN at the hospital's ICU says the make their workers were N95 masks for their who 13-hour shifts, We have a serious lack of personal protective equipment and in the ICU, we even chose to buy our own reusable elastometric respirators, instead of reusing n95s, which we know are completely unsafe and supposed to be single use."

She also notes many of her colleagues have left the hospital, "Many of my professionals have left the profession entirely or have moved to somewhere else. We have very few senior nurses on my shift in the medical ICU because of the lack of preparedness that they were forced to have, as well as the lack of an advisor they were supplied. We had a lack of resources and we were asked to do several jobs with an additional duties with a lack of staff compared to what we normally would have."

Assemblywoman Monica Wallace stood with the workers, "They don't want to strike. They cannot strike. We don't want to strike. It would be disastrous, disastrous for our community. So we are asking Kaleida administration and ECMC administration to hear these nurses, to hear their concerns. Everybody has to feel a little pain, we're in a very difficult situation. I am going to do whatever I can at the state level, to try to bring the resources back, but there's only so much that can be done."

"The nurses and health care workers shouldn't have to fight for safe staffing. We've been fighting for over 20 years, the conditions in health care are unimaginable. The stories are true. They live it each and every day. Almost exactly a year ago, South Buffalo Mercy went out on strike. They didn't want to go, but they had no choice. It became abundantly clear, if we want dignity and respect on the job, we must demand it. CWA 1168 is nearing the end of our contract negotiations, just last week we had a 96% strike authorization vote, We've given Kaleida two extensions. Like others, we don't want to strike. but if they force us to we are ready," says Mary Nowoncien, CWA 1168's Director of Mobilizing and Organizing Mary Nowocien and LPN.

ECMC and Kaleida Health workers continue to call for better working condition, as they continue to treat patients as part of the largest healthcare systems in Western New York.