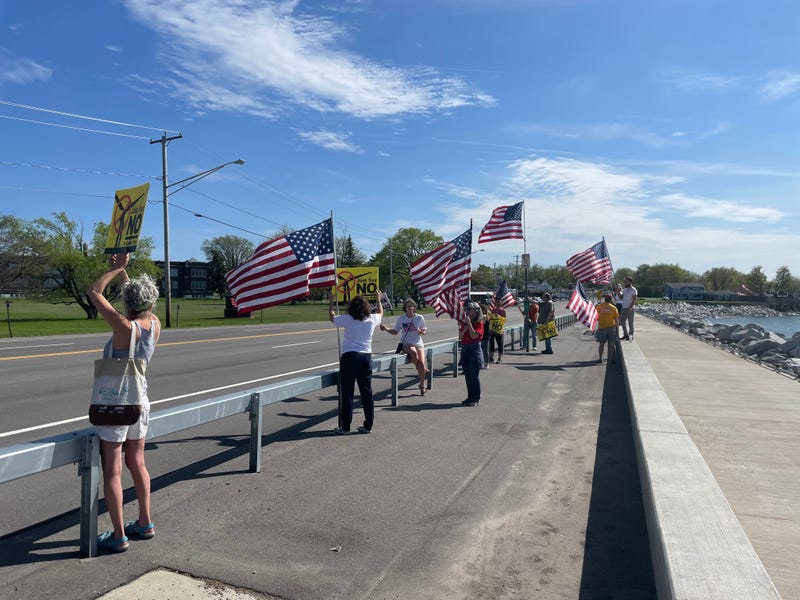 Hamburg, N.Y. (WBEN) - The fight continues to keep wind turbines out of the Great Lakes, as a number of people gathered on Wednesday along the Lake Erie shoreline on Route 5 in Hamburg to protest any potential projects.

So far there are about 30 people gathered along Route 5 to protest the wind turbines in the Great Lakes, but more are starting to flock in. pic.twitter.com/nUk6OIuQcA

"Diamond [Offshore] Wind is the corporation, it's a subsidiary of Mitsubishi, and they want to dig cables and interfere with the lake," said Patricia Meckes, one of the leaders of the group of protestors on Wednesday. "It'll tear up the lake, it'll upset the lake bed, it'll interfere with the bird migration. The view, we don't want to obstruct the beautiful view. And for the recreation of boaters, it would be a bad thing for our charter boatman. That's why we're here. We need community support."

Another one of the leaders of Wednesday's protest was David Adrian, who's an aquatic biologist and also a charter captain on Lake Erie. He has a vested interest, like many in attendance, in not only preserving the quality of the fishery, but also the aesthetics in the whole area.

"They're talking about 50 industrial wind turbines out in Lake Erie up to 450 feet tall, potentially up to 1,000 feet tall, .68 miles apart from one another with a 3,200-foot no-go zone between them. Even though they're out there, we as boaters and recreational enthusiasts won't have an opportunity to do anything with it," said Adrian.

In addition, Adrian believes that when the trenches would be dug up to install the wind turbines, it will kick up some contaminants that could endanger wildlife in the lake, as well as the drinking water for residents all across Lake Erie.

"The zebra mussels have taken heavy metals and laid them into the bottom of Lake Erie, and we're pretty convinced that when they put the bases out there, they're going have to dig up those heavy metals, and that will flow directly to our water intakes over near Buffalo," Adrian explained. "To run the cables ashore, they're also going to have to trench and do that same sort of thing, suspend issues like that. We're concerned about spawning habitat, and what the demolition of these things might do. After they're in for the lifetime of maybe 20 years, they're going to have to be taken out at about $650,000 apiece on our dime, and the net result of that - we've done some pretty detailed studies to show that the actual costs for electricity for us during that time period will be significantly higher. There's really no benefit for them to be out there at all."

It was just last week Thursday when Congressman Chris Jacobs was in Hamburg to announce another federal measure he is taking to preserve the health of the Great Lakes, this time with the mindset of blocking the construction and placement of wind turbines in the lakes.

"I have been fighting against wind turbines in our Great Lakes since I was a member of the United States Senate. Now as a member of Congress, I have introduced legislation to continue that fight," said Congressman Jacobs during his press conference at Hoak's Restaurant. "I am sure many of you remember - it was not too long ago - that pollution made and enjoying our Great Lakes to the fullest extent impossible. We have spent the last 50 years trying to get things out of our lakes. We do not need things getting in them again. We have done an immense amount of work to clean up our lakes. The incredibly disruptive process of building turbines, especially in Lake Erie, would risk elevating the toxins and pollutants that have settled at the bottom of a lake and the water column." 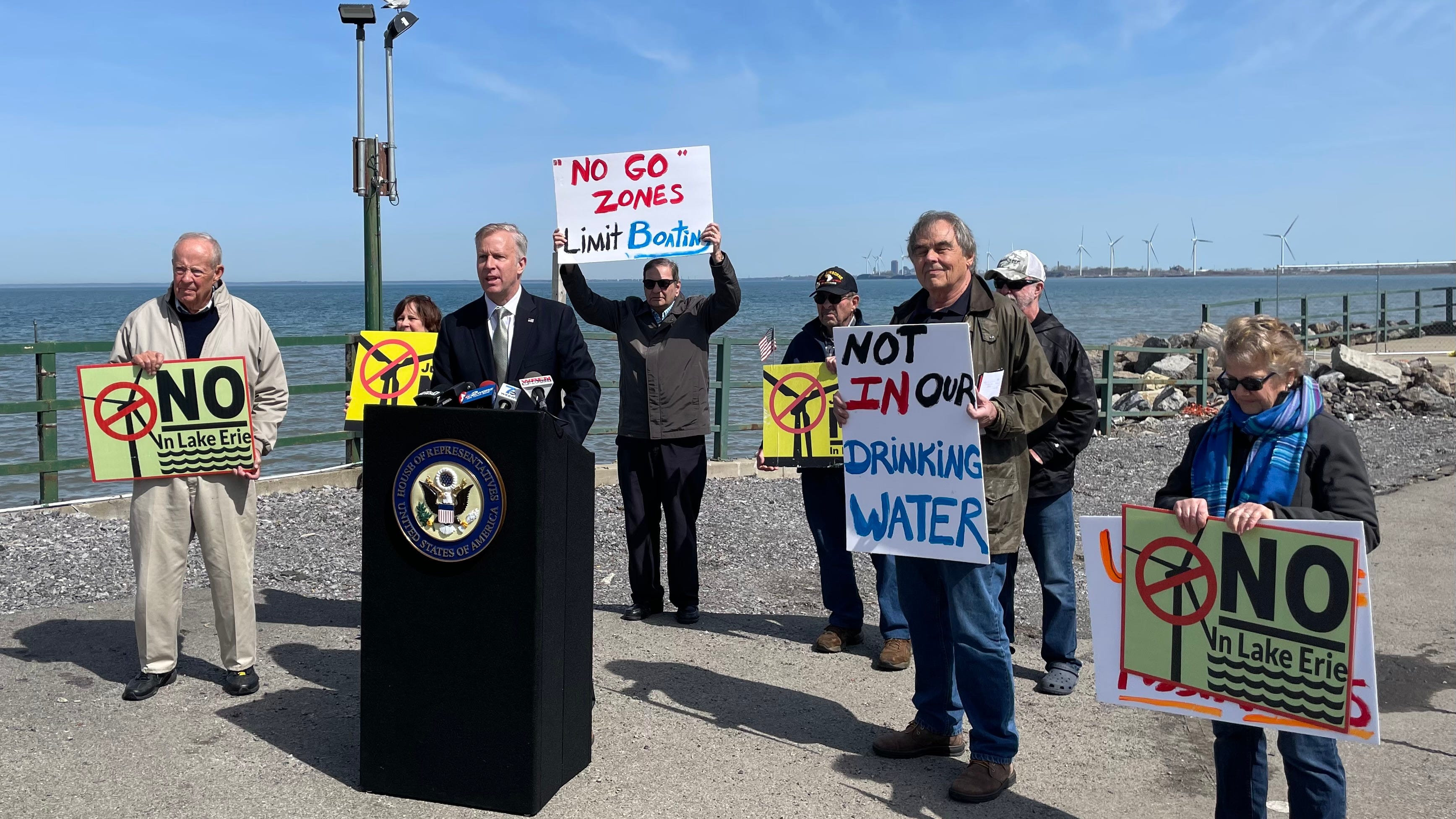 Congressman Jacobs fighting to block wind turbines from being placed in Great Lakes Congressman Chris Jacobs calls for full funding for Save Our Seas 2.0 Act

The folks who came out on Wednesday are fully aware of the support that they're getting from not only Congressman Jacobs, but also support right across the political spectrum. Adrian believes that everybody who sees this as a potential project sees it's really not going to be a good idea.

"There's been several [that have pushed] to ask that they pass a moratorium on any further work with regard to the wind turbines in Lake Erie," he said. "There's a precedence setting project in Cleveland, called 'Icebreaker,' and we expect the same sort of thing to happen there, where they're actually tied up in courts.

"A lot of it has to do with a joint commission, and what Canada has to say about this. They've already passed the moratorium on a lot of the wind turbines. One of the project things that they say is that, 'Oh, you're not going to be able to see him, because they're going to be from 2-6 miles from shore? Well, the fact is that we can see the wind turbines in Canada, which are way more than six miles from shore. We could see those from our shore, so obviously they're going to be visible." 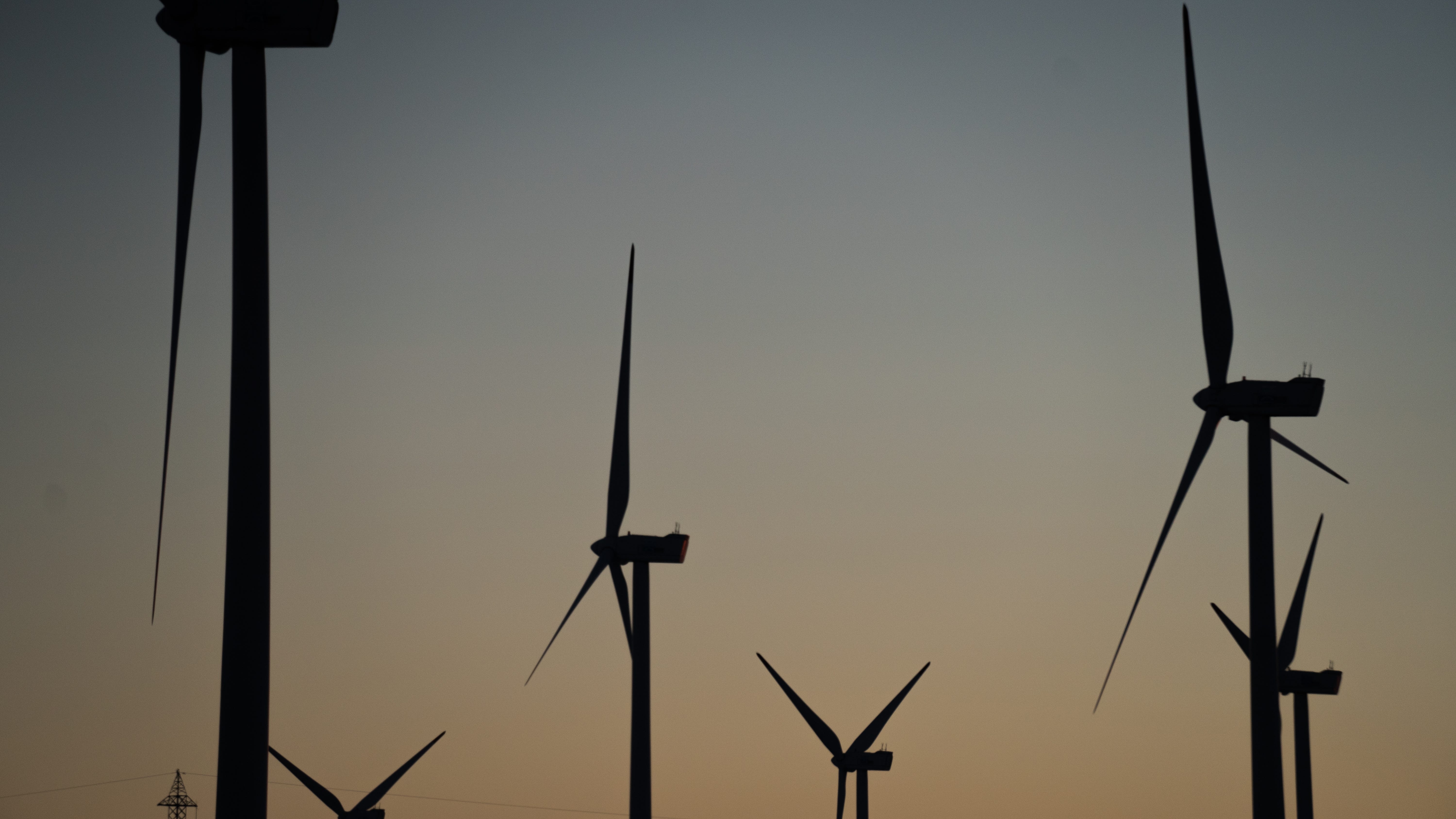 The group that gathered along Route 5 in Hamburg on Wednesday has held similar events over the recent months, including other protests just across the street from St. Francis High School. The group believes that their message has been well-received with many around the local community.

"Now I noticed that people from a long distance away will start honking. They recognize the logo and what we're about," Adrian said. "Our website is CAWTILE.com - Citizens Against Wind Turbines In Lake Erie. So we've sort of done our best to educate everybody as to what the impact might be, and the result is a lot of people know what we're doing."

"People are starting to understand that we cannot let this happen in our lake. We have got to protect it," Meckes said. "11 million people get their drinking water from Lake Erie. So anybody that turns on the tap, and that means Coca-Cola, all of our breweries, all of them use water for their bases of product. So it affects everyone, and we're getting great support."

A group of protestors are lined up along Route 5 by Hoak’s Restaurant in Hamburg to protest the potential for wind turbines being constructed and placed in Lake Erie and the other Great Lakes. pic.twitter.com/508XbJ3nOl

Not only have the discussions of wind turbines in Lake Erie become an issue in Western New York, but also down the lake as you head towards Cleveland, Ohio. There are other groups that are also fighting to preserve the long-term health and viability of the Great Lakes and Lake Erie for the region.

While the Cuomo administration had approved the beginning of the process to put these wind turbines in Lake Erie a few years back, there has still been no final vote for when construction of these turbines could begin.

In the meantime, the group of protestors will continue to do their part to educate the people of their cause, while also working with local communities to further halt the construction of these wind turbines in the Great Lakes.

"We've reached out to the individual municipalities along the lake, suggesting a moratorium could be passed in each municipality to prevent the actual ownership of the lake extends out to 1,500 feet," Adrian said. "We're asking them to publish a moratorium to prevent the trenching of these cables to come ashore. There's a lot of political ramifications about it right now, everybody wants green energy, but you have to say at what cost. This is a ridiculous cost, and we're not willing to pay it."

"We've reached out to the individual municipalities along the lake, suggesting a moratorium could be passed in each municipality to prevent the actual ownership of the lake extends out to 1,500 feet. So we're asking them to publish a moratorium to prevent the trenching of these cables to come ashore. There's a lot of political ramifications about it right now, everybody wants green energy, but you have to say at what cost. This is a ridiculous cost, and we're not willing to pay it."

"It's not really green energy, because the mining that has to go into the batteries, the oil that is used for those turbines, that leaks into the lake," added Meckes. "The wind blades, themselves, once they malfunction, they are not recyclable. They have to be buried, they're taking them to Arizona and New Mexico to bury them. So this is not a green energy, by any means."

Hear more of our conversation with both Adrian and Meckes in the player below: