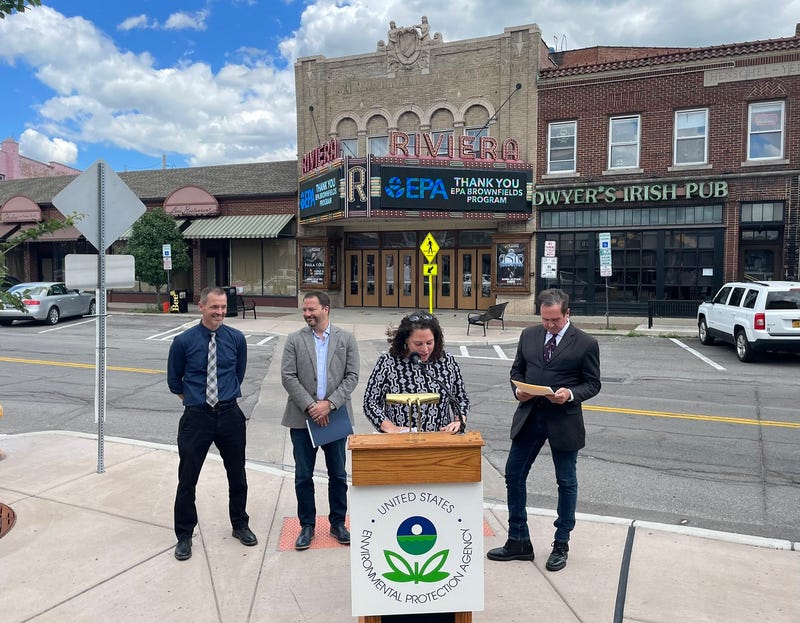 North Tonawanda, N.Y. (WBEN) - More federal money is on its way for Niagara County to help clean up communities across the county with help from the U.S. Environmental Protection Agency (EPA) as part of the Brownfield Program.

.@EPA Regional Administrator Lisa Garcia says Niagara County was selected for the $3.9 million grant to be used for continued work to clean up and refurbish contaminated sites. She says it’s needed to continue cleanup efforts not only in Niagara County, but across the nation. pic.twitter.com/P4DhQJKBk5

"Niagara County will use this grant to continue their work to clean up and re-develop contaminated Brownfield properties," said Garcia during a press conference outside the Riviera Theatre on Webster Street. "With the $3.9 million we're highlighting today, Niagara County has received over $9.5 million over the course of a few years from EPA, and they've also received $2.3 million in direct funding from Brownfields. By the end of this year, EPA will have awarded over $8 million to entities in New York.

The Revolving Loan Fund awarded by the EPA will be used for loans and subgrants for site cleanups throughout Niagara County. Past sites that have received this type of funding from the EPA includes the Riviera Theatre, Remington Lofts, Remington Tavern and Seafood Exchange, Buffalo Bolt Business Park and other properties along River Road in North Tonawanda.

"These projects would not come back to life and find their way back on the tax rolls, find a way to be back economically viable were it not for money like this," said Senator Ortt during Monday's press conference. "Niagara County, whether it's North Tonawanda, Niagara Falls, Lockport or so many properties in-between, the reality is this was an industrial county. That was the lifeblood, that was the economy for so long, and I don't want to apologize for that, because it provided food and wages and it put people's kids through college and all that stuff. But we know now, when those projects left, they left a legacy behind that needed to be addressed. This is a way - in partnership, federal dollars, state dollars, the Brownfield tax credit - these monies have gone [into] these properties, clean them up, made them environmentally viable again, and also economically viable."

.@SenatorOrtt points out that a number of projects in North Tonawanda would not have happened if not for the funding received from the @EPA for their Brownfields program. pic.twitter.com/r2Q4v0T8og

"New York State received a total of $10.5 million dollars, Niagara County's award is the largest in the entire state of New York," said Congressman Higgins of the fund. "Rob Ortt and I were talking a few moments ago about the return on investment. So for every dollar that goes into Brownfields re-development, you leverage about $20 in private sector investment. That is a return on investment that's healthy for our communities."

Over the last several years, there have been a several hundred Brownfield sites in Niagara County, ranging in size from very tiny gas stations to large industrial complexes. So what will this $3.9 million of grant funding go towards?

"We are looking at targeting tax delinquent properties," said Brownfield Program Manager, Amy Fisk. "Niagara County has a number of tax delinquent properties that are contaminated, and the county is moving aggressively on these sites, and we're taking temporary ownership of them. We are going to partner with the DEC to get these sites into the Brownfields Cleanup Program and get developers on board to take these properties from tax delinquent drains on our county's economy, to sites that are clean, are healthy for the people surrounding them, and creating good producing jobs and development, and getting them back on the tax rolls.

"They are vacant properties that have been lingering and are stagnant and tax delinquent. We're also looking at helping developers, who are looking at taking out a Brownfields property in Niagara County . We will help them with the remediation costs, working with the DEC and EPA and getting those sites into the program. We're also working with municipalities who have some properties that they would like to turn into parks and make open space for their communities, and getting those sites so that they're healthy and they're thriving things for assets for their communities."

Hear more from Monday's press conference available in the player below: