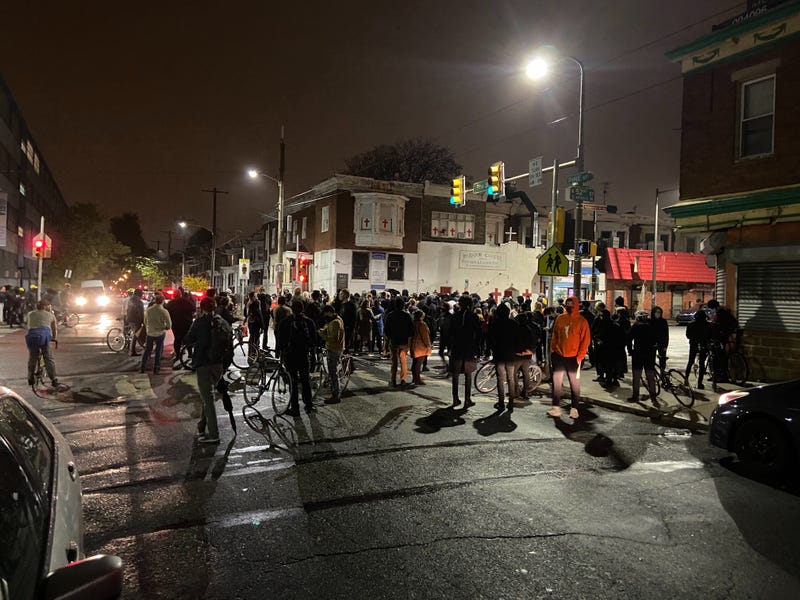 Authorities are investigating what happened when two Philadelphia police officers shot and killed a man in Cobbs Creek on Oct. 26, 2020. Police say the man had a knife and was waving it erratically. Protesters started marching just hours after the police-involved shooting. Photo credit Kristen Johanson/KYW Newsradio
By Kristen Johanson, KYW Newsradio 1060

Police were called to 61st and Locust streets around 3 p.m., where they say the man had a knife and was waving it erratically.

Police spokesperson Sgt. Eric Gripp said there was some sort of domestic disturbance on the block at the time, and the two officers told the man to drop the knife several times.

“The male continued to follow them while brandishing a weapon and the officers ordered him to drop it several more times,” he said. “Unfortunately, he did not, and the officers discharged their weapons several times, striking the male.”

He was struck in the chest and the shoulder around 3:45 p.m.

“Upon being struck, the male immediately dropped the knife and was scooped up by one of the discharging officers, who took him into his police car and took him to Penn Presbyterian (Medical Center),” said Gripp.

He died at the hospital. The mayor identified him as Walter Wallace.

Body cameras were activated, and the footage is being reviewed.

In a statement, Mayor Jim Kenney said: “My prayers are with the family and friends of Walter Wallace. I have watched the video of this tragic incident and it presents difficult questions that must be answered. I spoke tonight with Mr. Wallace’s family, and will continue to reach out to hear their concerns first-hand, and to answer their questions to the extent that I am able.”

“I recognize that the video of the incident raises many questions,” added Philadelphia Police Commissioner Danielle Outlaw. “Residents have my assurance that those questions will be fully addressed by the investigation. While at the scene this evening, I heard and felt the anger of the community. Everyone involved will forever be impacted. I will be leaning on what the investigation gleans to answer the many unanswered questions that exist.”

Protesters started marching just hours after the police-involved shooting. They gathered 10 blocks away at Malcolm X Park, near 51st and Pine streets.

This is the second fatal police-involved shooting this year.

The two officers are being interviewed, as investigators collect surveillance and social media videos. The incident remains under investigation.

Stay with KYW Newsradio for the latest updates.