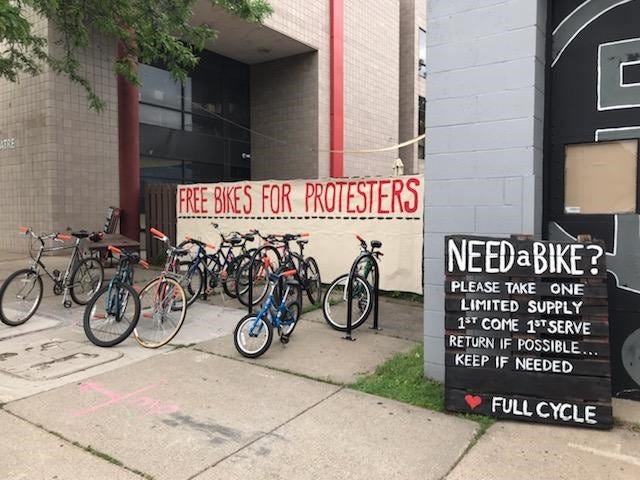 Since the death of George Floyd, bicycles have been ubiquitous — helping organizers control traffic to keep marchers safe, getting people where they need to go with interrupted public transit, and connecting volunteers and visitors to the memorial and donation sites.

In other words, bikes themselves are mobilizing in multiple ways, intertwined with community action.

There was no official announcement for Full Cycle's "free bikes for protesters and community members" initiative, just a banner on their shop at 35th and Chicago, three blocks north of where Floyd died.

"We thought it would be better to do attraction rather than promotion," Tyler Geisen, food access coordinator at Full Cycle, said. "We just put up big banners, and as soon as we put a banner up, a car was driving by and skidded to a halt and five kids ran out and we got them and their whole family and they were able to cruise around and check out the protest and in the next two and a half hours we got rid of all of our bikes."

Full Cycle is a donation-based non-profit supporting youth who’ve experienced housing instability with outreach and food access. Usually they give out between five and 10 bikes every week to youths and help deliver 200 meals a day to different shelters and programs. But their mission centers around bikes and the connection they provide. The free bikes for protesters are fitted with orange handlebars and a Full Cycle sticker.

The idea started as they brainstormed how to "creatively" and "tangibly" help community members dealing with the grief and aftermath of Floyd’s death.

"It felt like a way that we could leverage our capital and turn it into social capital," Geisen said.

Geisen said families have come to pick up bikes to take in the memorial site and surrounding donation areas along Lake Street. People from out of town volunteering have also benefited.

Bikes have played an important role in the aftermath of Floyd's death, and as Minneapolis moves forward with plans to rebuild more  equitably, the dependence on bicycles seen these few weeks offer a perspective on how valuable their presence is in the future.

"I myself and friends, (biking) is how we got to protests," Geisen said. "That was how we were safely able to get around the cities. I think there's a unique thing about bikes that when you're in a car you don't feel a part of what's going on. When you're on a bike, there's a lot more of a visceral connection to what's happening. We feel that when we get people on bikes they're able to engage a little more closely with the community."

Full Cycle accepts donations. All of their bikes are used and refurbished and they provide affordable repairs and service.