Ryan Fitzpatrick has played for a handful of teams in his NFL career, but it seems his heart belongs in Buffalo.

The Washington Football Team quarterback, who is going to be a free agent this offseason, proved himself as a man of the people on Saturday after he was spotted in the stands at Highmark Stadium in Orchard Park. He withstood frigid cold temperatures to cheer on the Bills with his kids during their 47-17 Wild Card Round route of the New England Patriots.

Not only did the 39-year-old brave the single-digit temperatures (which felt sub-zero with wind chill factored in) with the rest of "Bills Mafia", but one photo on social media showed Fitzpatrick shirtless while posing with fans.

Yes. That’s a QB for another NFL franchise….shirtless at a Bills game. Your fan base could never. #BillsMafia

The legend himself, Fitzmagic. pic.twitter.com/V5brB0TmN0

Fitzpatrick’s future in the NFL is currently unclear. He did not play most of the 2021 season, which ended after Week 1 when he sustained a hip injury and had to undergo surgery in December.

The journeyman quarterback has played for eight teams over the course of his 17-year career, but spent his most time in Buffalo, playing four seasons for the Bills from 2010-2012. 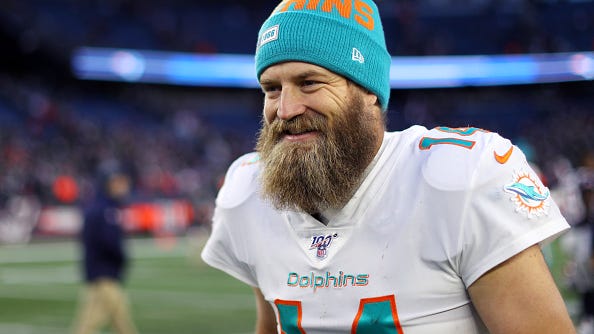 Perhaps maybe he could return to Buffalo as a backup for Josh Allen next year?

It is clear Fitzpatrick has a soft spot for the Bills, and it would be the perfect place for him to cap his career.