Hockey is officially back! The Bruins wrapped up informal captains’ practices on Monday and now begin the real thing when they report for training camp on Wednesday. The first official practice of the season will be Thursday morning, and their first preseason game is Saturday in Philadelphia.

So, what should we be watching for? Here are seven questions facing the Bruins as training camp begins.

MFM revisits the birth of 'doneski' with Chara retiring

The Bruins obviously hope so. They would love to get their star winger, whose current contract expires after this season, signed to a long-term extension before opening night. They gave Pastrnak his space while he spent much of the summer in Europe, but with Pastrnak now back in Boston, one would think Don Sweeney would make it a priority to meet in person sooner than later.

A Czech-based report last month indicated that Pastrnak wasn’t in a rush to sign a new contract and had some questions about the Bruins’ ability to contend for the Stanley Cup after Patrice Bergeron and David Krejci retire. Pastrnak seemed to push back on that a little bit on Friday, saying that it’s not his job to worry about roster-building and that his preference is to remain in Boston.

The Bruins know they’ll have to pay Pastrnak, and it would be surprising if they’re unwilling to offer something in the neighborhood of the eight-year, $76 million deal Charlie McAvoy signed last year.

If Pastrnak does elect to play out the season without signing an extension, the Bruins may have to seriously consider trading him at some point if it doesn’t like they can contend for the Cup, rather than risk losing him for nothing next summer. Obviously, that’s the worst-case scenario, and the Bruins will hope to get a new contract signed, sealed and delivered long before then, ideally in the next couple weeks.

2. How will Jim Montgomery mold this team?

The Bruins’ new coach has made it clear that he doesn’t believe the team needs any sort of major stylistic overhaul after racking up 107 points last year. They’re not going to abandon their defensive foundation and start playing wide-open, run-and-gun hockey.

That doesn’t mean there won’t be any changes, though. For starters, Montgomery has said he wants to get Boston’s defensemen more involved in the offensive zone. New assistant coach John Gruden, who replaces Kevin Dean, will be a key part of those adjustments.

Tweaks to the Bruins’ transition game and forecheck are expected to be part of the effort to create more 5-on-5 offense as well. There will be work to do to make the power play less predictable, too, with Gruden once again tasked to help there.

Beyond the stylistic changes, it will also be interesting just to see what a Montgomery practice looks like. Will it be all calm communication and teaching? Or does he have a more fiery side that might come out if things aren’t going smoothly at some point?

3. How does David Krejci look?

Krejci joined his teammates on the ice in Brighton for the first time on Monday, for the team’s final captains’ practice. There’s only so much that can be gleaned from that sort of session, but training camp and preseason games should give us a better idea of how the 36-year-old center looks in terms of conditioning and timing after taking a year off from NHL hockey.

With Patrice Bergeron’s line missing Brad Marchand to start the season, Krejci’s line with Taylor Hall and David Pastrnak on his wings will be counted on to hit the ground running and lead the way offensively early on.

Krejci said that he feels good and that playing in this year’s IIHF World Championship convinced him that he can still play at the NHL level. That may all be true, but it’s worth noting that NHL hockey is still another good-sized step up from World Championship hockey.

4. How does Pavel Zacha fit in?

The Bruins’ most notable offseason addition besides Krejci, Zacha will get the first crack at filling in for Marchand on Bergeron’s left wing.

The Bruins like Zacha’s all-around game, and at the very least he should help the Bergeron line remain a defensively sound, two-way line. But what they’d really love to see from him is an offensive jump.

Zacha was the sixth overall pick back in 2015 and entered the league with high expectations offensively, but the now-25-year-old never quite took off in his six seasons in New Jersey, topping out at 17 goals in 2020-21 and 36 points this past season.

That would still be perfectly fine production for a player who ultimately figures to be a third-liner once Marchand returns, but if Montgomery, Bergeron and Co. can unlock more, Zacha could be a real X-factor and go down as a summer steal. He’ll get a great opportunity to do that early on while playing in the top six.

There is plenty of buzz around the Bruins’ 2021 first-round pick, and understandably so after his strong season (and stronger postseason) with the Vancouver Giants in the WHL.

Whether Lysell’s potential translates to impact NHL play right off the bat remains to be seen, but he’ll certainly get the chance to show where he’s at during camp and preseason games. Montgomery told Gresh & Keefe at the Jimmy Fund Radio-Telethon that they’ll give Lysell a good look, but also noted that if he’s going to make the opening night roster, it might have to be in a top-six role given his skillset and still-developing two-way game.

That might be too steep of an ask right now. There’s no shame in Lysell needing to spend some time in Providence before he’s really ready to play in Boston. It will nonetheless be fun to watch Lysell over the next couple weeks and see if he does have a real roster push in him.

We know Charlie McAvoy and Matt Grzelcyk are out to start the season. That leaves the likely top six D as Hampus Lindholm, Brandon Carlo, Mike Reilly, Derek Forbort, Connor Clifton and Jakub Zboril (who is now healthy after having his season ended by a torn ACL), with Jack Ahcan and perhaps veteran journeyman Connor Carrick pushing them.

How that group lines up remains to be seen, though. Carlo and Clifton are the only right shots who have played regularly, so one of the lefties is going to have to flip to his off side. Our guess is it would be either Reilly or Zboril.

Lindholm is the clear No. 1 until McAvoy returns, and pairing him with Carlo would seem to be the most natural fit for the top pairing. But it’s possible Montgomery will keep those two separated so each can anchor one of the top two pairings.

Meanwhile, Reilly, Forbort, Clifton and Zboril will all be trying to prove to Montgomery that they deserve to stay in the lineup even after Grzelcyk and McAvoy return.

7. How does the bottom six shake out?

Like last year, the Bruins enter camp with 14 forwards on NHL contracts. Take out the injured Marchand and you still have the usual 13 forwards that teams typically carry on the active roster. So that’s it, right? Opening night roster is set?

Well… maybe. We already mentioned Lysell as the most exciting youngster, but you also have the likes of Marc McLaughlin, Johnny Beecher, Jack Studnicka and summer signing AJ Greer looking to win jobs in the bottom six. (Oskar Steen is one of the 14 already on an NHL contract, although that doesn't necessarily guarantee him a job.)

Like last year, the question is, do those guys actually have a chance to win an opening night roster spot if they have a strong camp and preseason? Or are they destined to start the year in Providence no matter what because of the ol’ “numbers game”?

Montgomery has said he wants competition and that everyone has to earn their spot, so we’ll take him at his word. Of course, if one of those young guys does win a job, it will be at the expense of a veteran currently penciled in above them. Nick Foligno, Trent Frederic, Tomas Nosek and Chris Wagner are closest to the cut line.

Wagner was already buried in Providence last season, and could be in danger of the same fate this year. The same could also be in play for Foligno if he can’t prove that he’s in a better place than last season. Nosek’s versatility is valued, but he needs to show he can bring more offense as well. Frederic and McLaughlin can bring similar versatility playing both center and wing. 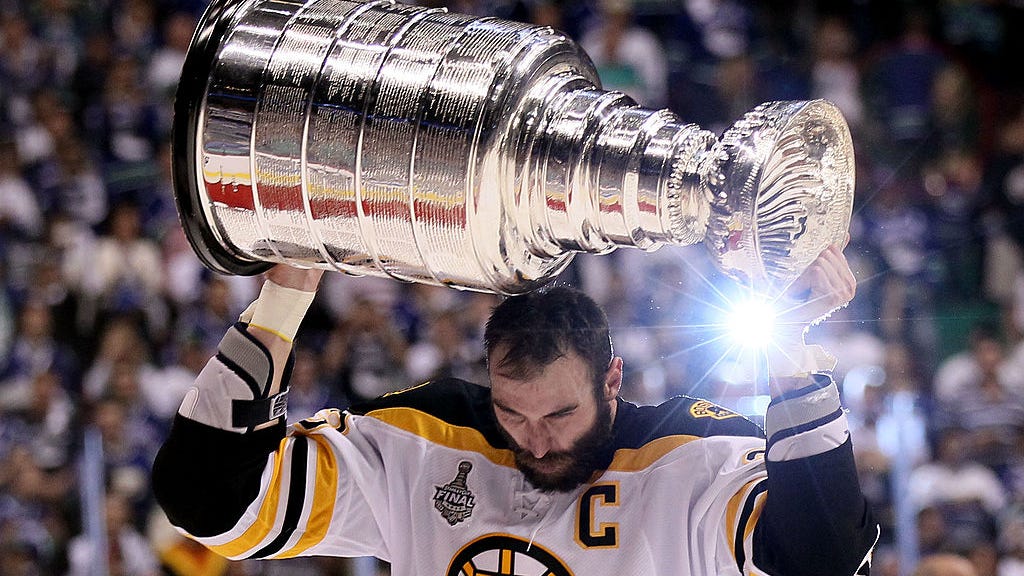 Zdeno Chara changed everything for the Bruins