Often times, franchise-altering change takes place slowly over a number of years and it can be hard to pinpoint a single defining moment.

That was the day the Bruins signed Zdeno Chara and Marc Savard in free agency and immediately named the then-29-year-old Chara their new captain. It felt like the dawn of a new era of Bruins hockey at the time, and it was.

The 2005-06 season had seen the Bruins finish 18 points out of the playoffs and trade away Joe Thornton and Sergei Samsonov, the two top-10 picks from 1997 around whom they had once hoped to build the next great Bruins team.

That marked the end of one era. The signings of Chara and Savard, along with the elevation of then-21-year-old Patrice Bergeron to alternate captain that same offseason, marked the start of the next.

Chara’s arrival did not lead to an immediate turnaround in the standings. In fact, the Bruins missed the playoffs again in 2006-07. But behind the scenes, Chara was making changes he believed were necessary and laying the foundation of a culture that would help the Bruins win the Stanley Cup in 2011 and that remains in place today.

“Without that, you cannot win. You need to have a culture,” Chara said Tuesday during his retirement press conference. “You need to have players that want to follow. It wasn’t just me. It was a team effort. I could’ve never done it without Patrice. I could’ve never done it without Brad [Marchand] coming in and following Patrice’s lead. You need guys willing to come in from other teams and adjust to that culture. We pushed each other. We were practicing as hard as we could against each other. We were setting goals, and slowly and surely we were climbing and taking the steps.”

Chara said it wasn’t easy to change the Bruins’ culture, and not everyone bought in right away, but he believed in the example he was setting as captain and didn’t relent.

“Without the culture and without somebody planting the seed and basically saying this is how it’s gonna be -- yeah, it wasn’t easy and not everybody wanted to kind of change, but it was necessary,” he said. “I thought it was necessary for the organization to make that change.”

Bruins CEO Charlie Jacobs put it more bluntly, saying that there was an unspoken and sometimes spoken ultimatum that anyone who wasn’t on board with what Chara was doing wasn’t going to be around long.

“It changed when Zdeno arrived. Everything became much more professional,” Jacobs said. “A lot of that had to do with our coaches as well. … Zdeno brought that intensity. Everybody had a choice to either get in line or get out the door. That’s kind of what happened.”

Chara wanted practices to be just as hard, if not harder, than games. Bergeron recalled a noticeable uptick in intensity and drills against Chara that would end with Chara knocking his helmet sideways or throwing him to the ice.

“You learn from that,” Bergeron said. “His competitive drive, the way that he prepared for practices, for games, in the gym, his focus, I learned from all of that.

“…It kind of took time for everything to build. When there’s a new culture coming in, it kind of takes time for guys to get involved. Management also did a great job bringing in some character guys, guys who would buy into what he wanted to do. Me and the rest of the leaders would try to help establish a culture, but I think it was kind of more his competitiveness, his drive, the way he presented himself every day, just ready to go. It’s contagious.”

The Bruins hoped that Chara would be the right captain for them and lead them back to the promised land, but there were no guarantees. The organization’s faith in him was rewarded in 2011, when Chara captained Boston to its first Stanley Cup in 39 years.

“We were really excited,” Jacobs said of signing Chara. “We thought that he could be an impact player for us. To the extent to which he became one, winning the Norris Trophy, he led our team in ice time, plus-minus, penalty minutes -- let’s not forget, he was one of the toughest guys in the show for over a decade with the Boston Bruins -- frankly, no, I didn’t see it all coming.

“We had hoped to win the Stanley Cup. Every team wishes to climb the mountain top, so to speak. We were able to do that with Zdeno as our captain. But I didn’t have a crystal ball. I didn’t see it all, but we were really fortunate to be along for the ride with him.”

There are and will continue to be those who consider it a disappointment that the Bruins “only” won one Cup during the Chara era. They came close on two other occasions, getting back to the Final in 2013 and 2019. Maybe things would have ended differently if Chara and Bergeron weren’t both banged up in 2013, or if Chara wasn’t limited by a broken jaw in 2019 -- a broken jaw that had inspired one of the loudest ovations we’ve ever heard at TD Garden.

Other than watching him lift the Stanley Cup in Vancouver 2011…this was my favorite Zdeno Chara moment. Game 5 of 2019 SC Final when he played with a broken jaw! The ovation from the ⁦@tdgarden⁩ crowd was deafening! So much respect/love! ⁦@NHLBruins⁩ @wbz pic.twitter.com/n1WT7ftER2

They will appreciate the culture change Chara brought, one that lives on through Bergeron, Marchand and David Krejci now, and possibly through the likes of Charlie McAvoy and David Pastrnak in the years to come.

Nothing lasts forever, though, and at some point the Bruins will need another reset like they did in 2006. And when that time comes, they may find themselves searching for the next Chara to lead the way. 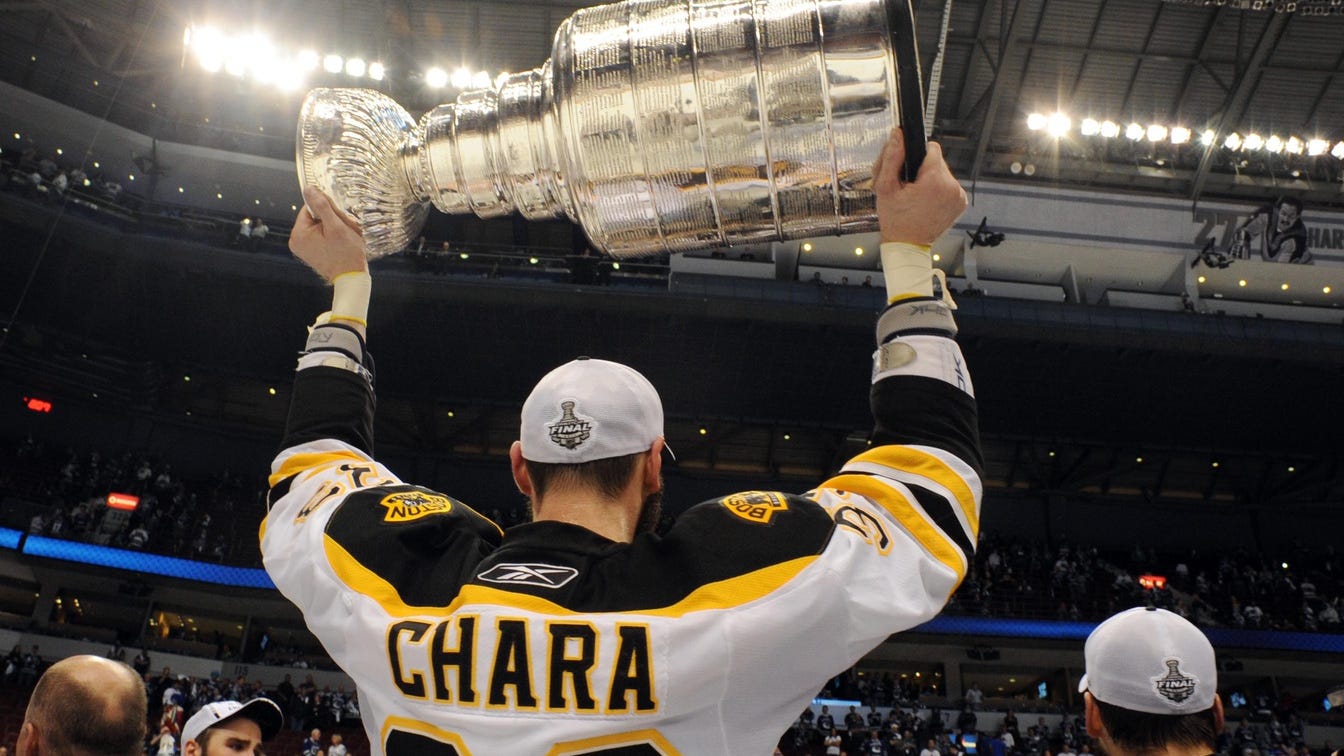 Zdeno Chara signs one-day contract and retires as a Bruin