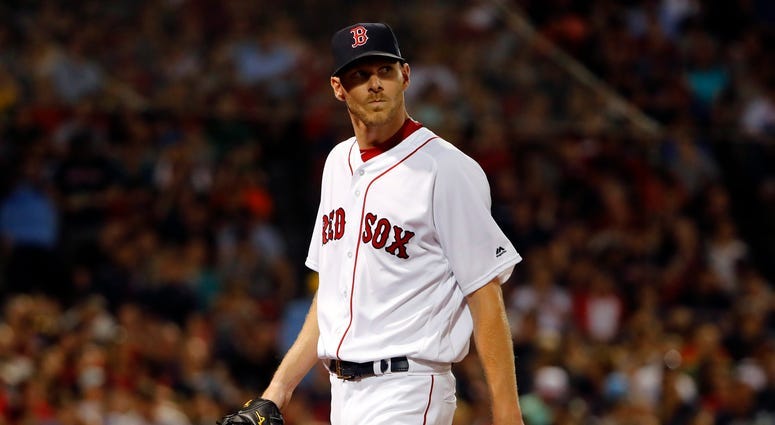 Red Sox fans have come to expect greatness from newly acquired ace Chris Sale, so on Saturday night when the lefty’s line wasn’t so sparkling, it may have appeared underwhelming to some.

Make no mistake, Sale was it again in the Red Sox’ 11-3 victory.

Already leading the majors in average pitches per game, Sale threw another 110 to Tigers hitters and earned his eighth win of the year.

Facing former AL Central foe Justin Verlander for the sixth time in his career, for parts of the night it appeared as though Verlander would best Sale as he did on April 10. But Sale had other plans.

“They have given me some fits over the years so, you know, any win is good – don’t get me wrong – but teams like that, it’s nice to kinda get over the hump,” Sale said.

Sale, who has put forth a quality start in all but two of his outings in a Red Sox uniform, did just that in Saturday’s nationally-televised affair. He dazzled hitters with his swing-and-miss stuff, kept them guessing with his slider and by in large limited the damage.

It could have been ugly – he allowed nine hits for just the second time this season and left six Detroit runners on base.

After Jackie Bradley Jr. saved the Sox a run in the first inning on another one his heroic plays in center field, Sale found himself in a jam in the third. Jose Iglesias, who played in Boston from 2011-13, doubled and Ian Kinsler singled, leaving runners at the corners with nobody out.

In typical Sale fashion, he went on to strike out the next three batters, the last of whom was Victor Martinez, who has the highest average against Sale of any active major-leaguer.

“When you combine the physical abilities with the competitive tenacity that he has, in those tights spots he has a unique ability to reach back and get a little extra and get key strikeouts,” manager John Farrell said.

The next four innings saw Sale surrender two Red Sox leads, once in the fifth and again in the sixth, but he escaped both times without allowing the Tigers to break the tie.

After Sale’s 1-2-3 seventh inning, the Sox reclaimed the lead for good with a three-run bottom half – capped off by a Mitch Moreland two-run double. According to Sale, he’s come to expect this tenacity from his offense.

“That’s what I’ve know for the duration of my tenure here,” he said. “That’s what I have in the back of my mind every game, is knowing that, not only are these guys gonna make plays, but they’re gonna score some runs.”

The Sox did just that in bunches in the eighth, adding five insurance runs for good measure. A Matt Barnes/Blaine Boyer combo did the rest, shutting the door without allowing a hit.

Sale’s win not only improved Boston’s record to 10-3 when he pitches, but it also kept the team’s perfect 26-0 record when leading after seven innings in tact.

While his numbers – seven innings, nine hits, three runs, seven strikeouts – weren’t spectacular, Sale proved yet again why he’s the ace of this staff and one of the best in the game. The best pitchers use their stuff to make big pitches when it matters most, and Sale’s performance on Saturday was the prime example of that.