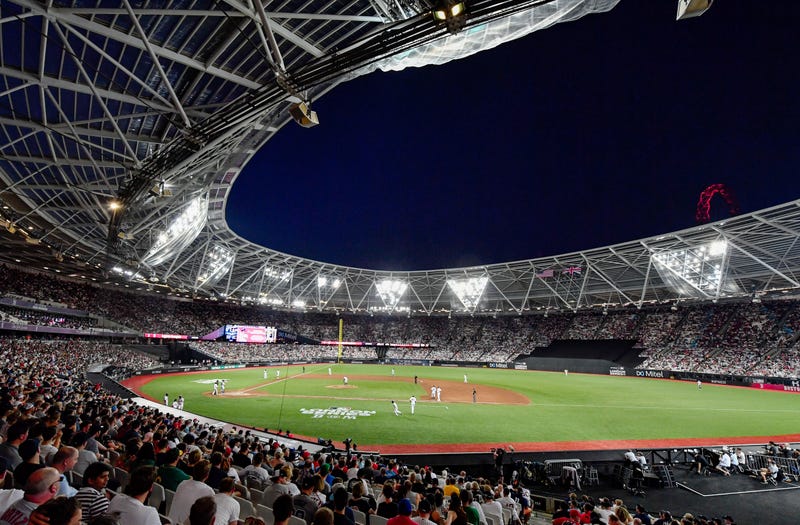 LONDON (WEEI) -- Everyone was saying all the right things. Evidently, it was grand ol' time.

"I'd say it's definitely the biggest crowd I've played in front of and probably the loudest as well," said Red Sox first baseman Michael Chavis, who was the "hosts" star with a pair of home runs. "The stadium was set up a little bit differently with overhang, I feel like it kind of like echoed almost. The noise was very relevant on the field. It was fun, it really was. It was cool to be a part of that."

"I think we gained some fans for sure," surmised Mookie Betts after his team's 17-13 loss Saturday. "I think that was a pretty exciting game for everyone." (For a complete recap, click here.)

And those pitchers who were victims of history -- with both teams scoring six runs in the first inning -- simply tipped their chapeaus and moved on.

"There is no excuse for it," said Red Sox starter Rick Porcello who retired just one batter before exiting. "That was an unacceptable performance, especially where we are. The need for pitching, to go deep into games against a team we have to beat. I take full responsibility for it. I need to be better."

"What I'm most disappointed with is obviously myself," noted Yankees starter Masahiro Tanaka, who didn't fare much better than Porcello, getting just a pair of outs prior to ending his night. "I think it was a pretty unacceptable result, but I don't think I can move on unless I just fully come to terms with it."

OK. But what the fine folks of England witnessed was not baseball. And it's fair to try and figure out why that was the case.

It would have been easy to chalk this up to the typical Red Sox vs. Yankees slog/slug-fest. But this was different, as the second-highest run total in the rivalry's history would suggest. You don't just happen to play a game like this -- one which lasts three minutes shy of the longest nine-inning contest on record -- by coincidence. I think most understand that. But only a few were looking in the right places when seeking out a legitimate explanation.

This wasn't about the dimensions of the field. Only a handful of plays were impacted by the makeshift surroundings. Michael Chavis dropped a pop-up in foul ground after not realizing he hadn't run out of room in the unbelievably spacious territory between the infield and stands. Jackie Bradley Jr. had to jump for a Luke Voit double against the center field wall that he would normally have been able to drift back and reel in if not for the fairly shallow fence. But the home runs? They were all legitimate.

Sure, the turf was fast, but those line-drives being slapped around weren't really touching the ground before finding their way into the outfield gaps.

I have my theory: I taking an educated guess that it was the baseballs.

None of the participants would suggest the equipment wasn't exactly the same. That's not how this works. This is, after all, a very sensitive subject for Major League Baseball. But it was somewhat telling that when Tanaka was about was asked by the Japanese media if the baseballs were any different he was somewhat non-committal.

It isn't a secret that the baseballs manufactured throughout the last few years have been, to be kind, inconsistent at times. This would seem to be one of those times. And it isn't really about the hitters. When you have this many proven pitchers struggle to throw breaking balls -- such as was the case with Porcello and Tanaka at the game's outset -- that simply is not normal.

While there might not be the quotes or commentary to back up such a theory, we do have science. Take a gander at what the horizontal and vertical breaks on both starters' sliders were (according to BrooksBaseball.net) and you will find results that don't line up with any of their recent outings.

This whole scene was just too much of an outlier. And add in the perceived motivation for Major League Baseball to elicit as much offense as possible, and it's all hard to ignore.

Too much smoke. Too much fire. Not enough real baseball.