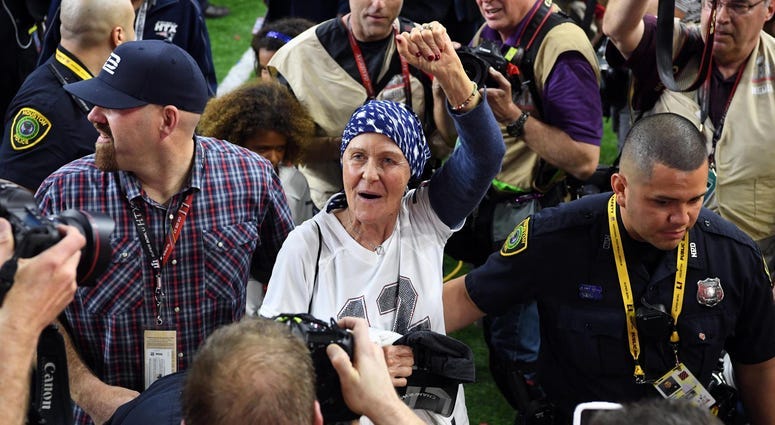 As Tom Brady has become one of the most famous athletes in the world, he's sheltered almost his entire personal life from public view. He often comes across as a football cyborg, programmed to win Super Bowl championships and plug TB12 products. That is, except when he's with his family.

Brady's close bond to his parents was on display for over 100 million people to see after Super Bowl LI, when he broke down and cried with his mother on the field after the Patriots’ historic comeback victory. Galynn Brady was undergoing cancer treatment last year and couldn’t make it to any games all season. The Super Bowl was the first game she attended.

Brady’s close relationship with his mom came to the forefront again this weekend, as the Patriots honored her as part of their “Crucial Catch” ceremony prior to Sunday night’s game against the Falcons –– a Super Bowl rematch. The team introduced players and family members who have battled cancer, including Joe Andruzzi, Nate Solder’s wife and son –– who’s currently ill –– and Marcus Cannon’s wife. Gaylnn Brady was accompanied by her husband, Tom Sr., who passionately defended his son throughout the Deflategate saga.

In a feature story on NFL Network, Galynn Brady detailed how her son’s support helped her get through chemotherapy. Though Brady plays across the country, they would speak and FaceTime often.

It’s apparent Galynn Brady was an inspiring force for the Patriots last season. When the Patriots were mounting their 25-point comeback against the Falcons, for example, NFL Films cameras caught Julian Edelman telling Brady to win it for his mom. Robert Kraft sent Galynn a Super Bowl ring, symbolizing her impact on the team.

In his weekly interview with “Kirk & Callahan” Monday, Brady talked about how happy he was to see his mom at Gillette Stadium Sunday.

“We haven’t really dealt with anything health-wise in our family as significant as what both my mom and my dad were going through," Brady said. "It was very challenging. I’ve been away for a long time. I went to school in Ann Arbor and then came all the way out here. Fortunately, two of my three sisters still live in California and they were right there with my mom and my dad, too. I knew they were really well taken care of by my sisters and my parents have a lot of friends, we still live in the same house that I grew up in. They had a lot of support and we’d check in a lot.

"Everyone kind of knew what was going on on a daily and weekly basis with treatments,” he explained. “I feel so much for families that are being affected by it. I think everyone can share so many of the same feelings because it is really challenging. You want to stay so strong for your parents and I think that is the most important thing — just try and say positive and keep encouraging. Sometimes their souls move on to a better place and my mom fought really hard, had great care. I am so happy she was here yesterday and we’re just going to keep staying on top of it and appreciate the moments we have.”

Brady, the five-time Super Bowl champion and husband of Gisele Bundchen, is a long ways away from the sixth-round draft pick who grew up in San Mateo, Calif. But his parents, who still live in his childhood home, bring it out of him.

Above all else, Brady seems to be a good family person. That should be a big part of his legacy, too.