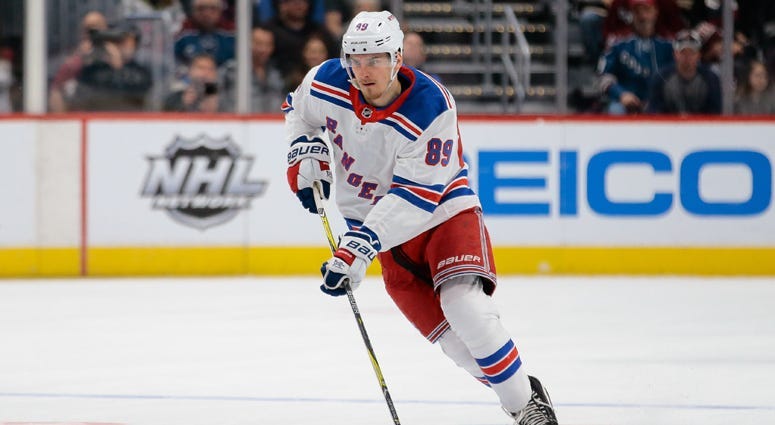 Only 30 days stand between the Rangers and their Oct. 4 regular-season opener. In one month’s time, a new-look Rangers team led by rookie head coach David Quinn will open the 2018-19 campaign against the defending Presidents’ Trophy holders, the Nashville Predators.

The Predators bear similarity to Rangers teams of yesteryear. Nashville boasts formidable depth on the blue line, rock-solid netminding in the form of reigning Vezina Trophy winner Pekka Rinne and an experienced veteran core. While the Rangers couldn’t realize their Stanley Cup potential after reaching the 2014 Final and winning the 2014-15 Presidents’ Trophy, it remains to be seen whether the win-now Predators can go one step further after reaching the 2017 Stanley Cup Final and capturing last season’s Presidents’ Trophy.

Opportunities to make a run for the Stanley Cup come in cycles. The window for a team to contend doesn’t stay open forever. The Los Angeles Kings followed up two Stanley Cup championships in three years with two nonplayoff seasons and two first-round exits. After winning three Stanley Cups in six years, the Chicago Blackhawks were eliminated in the first round twice and failed to qualify for the playoffs last season.

Nothing lasts forever in the modern NHL. Aging rosters and the salary-cap squeeze force teams into making tough decisions. In the case of the Rangers, the 2011-12 to 2014-15 seasons offered the Blueshirts a window to seriously contend for Lord Stanley. A memorable run that was ended by the Los Angeles Kings in the 2014 Final and a Game 7 loss to the Tampa Bay Lightning on home ice in the 2015 Eastern Conference finals marked how tantalizingly close former coach Alain Vigneault’s teams came to Stanley Cup glory.

MORE: Hartnett: Patience Is The Key Word In Rangers' Pursuit Of Panarin

Following their 2015 playoff exit, impact of an aging core and the pressure of the salary cap began to take its toll on the Rangers’ roster. Martin St. Louis retired in the 2015 offseason. Carl Hagelin became a salary-cap casualty, traded to the Anaheim Ducks for the unfulfilled potential of Emerson Etem. One summer later, prized 2015 trade deadline addition Keith Yandle’s negotiating rights were traded to the Florida Panthers, as the Rangers had committed a sizable cap charge to core defensemen Dan Girardi, Marc Staal and Ryan McDonagh.

Girardi was eventually bought out of his contract in the 2017 offseason. Ahead of the 2017 draft, remarkably consistent center Derek Stepan was traded, alongside stellar backup goaltender Antti Raanta, to the Arizona Coyotes for a first-round pick that was used to select center prospect Lias Andersson and blue line prospect Tony DeAngelo. But what the Rangers desired the most and received from trading Stepan was much-needed salary-cap relief.

A 2017 trade deadline selloff that included the departures of McDonagh, J.T. Miller, Rick Nash, Michael Grabner and Nick Holden left the Rangers with a largely inexperienced roster in the final months of Vigneault’s tenure as bench boss. A summer of change included the arrival of Quinn, who impressed at Boston University for his ability to connect with and develop highly skilled youngsters – namely Jack Eichel and Clayton Keller.

The makeup of a youthful yet potentially long-term promising Rangers roster meshes well with Quinn’s résumé and track record of getting the most out of high-end talents. Thus, begins the great experiment of whether Quinn’s success at the collegiate level can translate to the NHL.

FIVE PLAYERS WHO STAND TO BENEFIT MOST FROM QUINN THIS SEASON

The electrifying Russian wing will get a fresh start under Quinn after Vigneault’s tough-love approach limited Buchnevich’s opportunities in the top six. The Rangers have recognized that the development of the goal-getting 23-year-old is integral to the long-term success of the Blueshirts. While Vigneault talked often about giving the most highly skilled players more leeway to use their talents, he applied a different set of rules to youngsters. Any mistake by Buchnevich was met with a sharp reduction in ice time.

Now, the overall target of development is being prioritized over instant success as the Rangers are in rebuild mode. When Quinn was introduced as coach in late May, it was refreshing to hear him state that there’s no one way to develop players.

“To me, that’s a big situation in how they develop,” Quinn said. “You can’t develop every guy the same. Everybody’s different. It all depends on the situation.”

If Quinn can appeal to Buchnevich and summon the most out of his natural skill, an important key to a contending future will be unlocked.

Last season’s nine-game audition gave Rangers fans a small glimpse of Chytil’s impressive talents. While the 18-year-old center is very much a long-term project, his 31 points in 46 games at the AHL level for the Hartford Wolf Pack is proof of the Czech’s quick transition to the North American game.

Chytil possesses excellent skating ability, impressive playmaking vision and the smarts to arrive in goal-scoring areas. Like most centers his age, he will need to add bulk to his frame and keep making positive strides on the defensive end – but it’s clear that Quinn has a very talented center to work with in Chytil.

Like Chytil, Andersson received a handful of games to audition last season. The 19-year-old center recorded 14 points in 25 games with Hartford last season. Andersson is more of a readymade pro center than Chytil. Andersson boasts natural leadership traits, a tremendous work ethic and physical style of play. Think of a Jesper Fast work ethic mixed with Derek Stepan’s IQ and ability to play all situations.

Quinn has stated the need for the Rangers to “be in the opposition's faces and make them uncomfortable every shift.” Kreider’s speed game, hulking strength and ability to crash the net makes him the ultimate power forward for Quinn’s system. His lightning speed causes havoc for opponents, by pushing the opposition defense back to create open ice.

Injuries and a lack of production contributed to an underwhelming first season in New York for DeAngelo. Eight points in 32 NHL games wasn’t what the Rangers were hoping for. Keep in mind, six of those eight points came on the power play. His even-strength total was a mere two points.

So far in his young career, the 22-year-old defenseman has been an AHL/NHL tweener. DeAngelo’s skating ability and natural tools impress the eye, but he still has a lot to prove at the NHL level. With a deep pool of defensemen in the Rangers’ system, time is running out for DeAngelo to prove he can stick with the Blueshirts. We’ll see if a change in coach and system can coax DeAngelo’s best play.