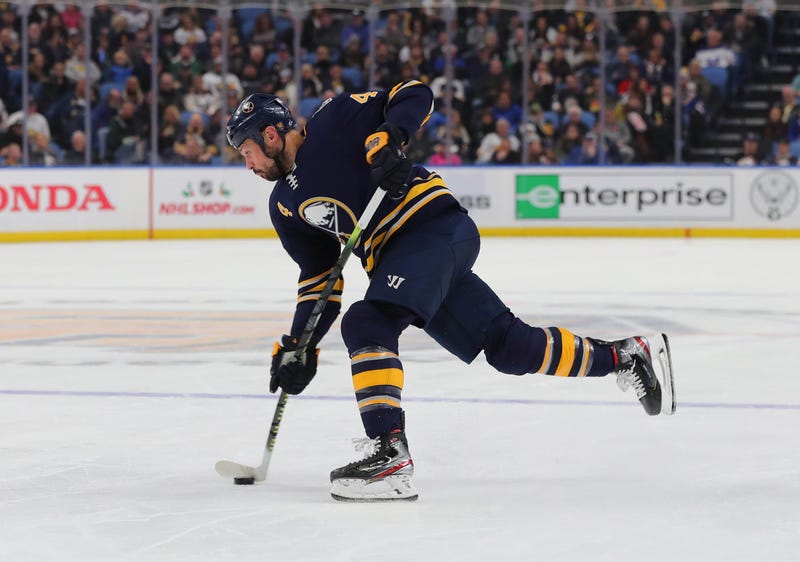 Buffalo Sabres defenseman Zach Bogosian said on Friday after practice that Thursday night may have been the first time in his 13-year NHL career that he has ever been a healthy scratch for a game.

Bogosian was the only defenseman that did not dress in Thursday's 4-3 win over the Nashville Predators, taking a seat in the press box with forwards Conor Sheary and Casey Mittelstadt. The Sabres currently have eight defenseman on the roster that are NHL caliber players, and all of them have shown the capability of playing on a nightly basis.

Sabres head coach Ralph Krueger has said that he is working with a rotation of defensemen on the blue line, and that his decisions are based on what he sees will help the team win on a given night.

Just before Thursday's game against the Predators, TSN hockey insider Darren Dreger reported that Bogosian has requested a trade out of Buffalo.

When asked about the report on Friday, Bogosian was very mum on the situation.

"Any conversation between myself, [general manager> Jason [Botterill> and my agent will stay with me personally," Bogosian said. "I'm going to let everything stay in house."

The 29-year-old defenseman has only appeared in 10 games this season after a late return from the lineup after offseason hip surgery in April. In those 10 games played, Bogosian has picked up three assists, registered nine shots on goal, and is also a plus-2.

However, his recent play has been shaky, at best, with mistakes in both ends of the ice that have created a number of scoring chances for the opposition. Since the three-game road trip to Western Canada, Bogosian has been seen as more of a liability on the ice than anything else.

The veteran defenseman was clearly not too happy about being a healthy scratch on Thursday, but says he is doing what he can to improve his game.

"Everyone wants to play. For me, I'm just focused on working hard and getting back into the lineup," Bogosian said.

"Any time as a player, you want to play every game, every chance you get. That's all I'm really focused on right now."

After the game on Thursday, Krueger was asked about the rumor that Bogosian had requested a trade, but said it didn't interest him. Krueger's message on Friday was much of the same, and that his goal was still on putting together the right lineup to help his team win hockey games.

"We've always dealt with everything head on, open on the table, transparent," the Sabres head coach said. "It's about building a culture here in Buffalo where everybody on the roster is all-in on the plan that we have, and pushing to make everybody around them better and helping to make the club better. We've been speaking about that since August, and we're going to continue to speak on it as we build it. This is not going to be a clear, straight line up to this culture that consistently performs all the time at all different levels. We're going to have challenges, and these situations are going to come up in the internal competition. For us, it's more of a question of principal. We're going to be open and honest about what goes on in our room as much as we can, but some things are going to be worked on internally and will be visible for you to see. Sometimes we need to spend some time on that and it will take time and we will see the visible process here quite clearly. I have no fear or no sleepless nights because of minor conflicts within the group. What we need to do is react to them. Our character is tested in conflict, and our personality actually grows and develops in these kind of situations. That's what we'll do all together.

"I've come in here without a past with these guys, and they know that. I've come out without a past as far as what's been burdening the club here and there. I've educated myself on the things that we need to take with us and the things that have been done really, really well. There's a lot of things that have been done well, and we're confirming those... I'm a leader that's not here to be popular at all. Doesn't interest me on the day. The past is not the present. It's the past. We will work with the present, and what you're doing today and what you're giving the team today will decide where your role is, what your minutes are, and how much you are playing a part in our process. It's not that I'm cold. I'm doing what I know I need to do as a leader to get the most out of this group and find the potential of the Buffalo Sabres."

Throughout his career, Bogosian has had a history of injuries and missing significant time. He has only played more than 70 games in a season twice while with the Atlanta Thrashers in the 2009-10 season and 2010-11 season. Since then, the most games he played in a single season was 65, which he accomplished in the 2011-12 season and last season.

Since being acquired by the Sabres in February of 2015, Bogosian has only appeared in 234 of a possible 388 games, scoring 12 goals and registering 65 points, as well as a minus-47 rating.

Despite missing the first 22 games of the season, Bogosian feels that he is fully healthy and is starting to feel like the player he once was before being struck by the injury bug.

"I like where my game is going, and for the first time in a lot of years, I'm healthy and 100%. I like where I'm going," Bogosian said.

While Krueger understands the frustrations that Bogosian may be feeling, he says that it is up to him to earn back his spot in the nightly lineup and see more ice-time.

"Bogosian didn't have a training camp. He didn't have the luxury of trying out his role and his position into being the best player he can be. I believe we still haven't seen the best Zach Bogosian, and my job is to find the best Zach Bogosian for our team. We'll continue to do that. After 10 games for him to slip a bit after such a long break and then need some breathing time to take another step up, that opportunity is there. The players decide what their ice-time and their roles are in this team. Not I. As a coaching staff, we will make some decisions that might look like they're biased, but they're not. We have all the information and we share as much as we can, and then we make make the decisions with the roster. I think a player that hasn't gone through training camp needs to also be patient before he expects to play his A-game."

The Sabres had a short practice on Friday before leaving for Long Island to take on the New York Islanders on Saturday afternoon at the Nassau Veterans Memorial Coliseum.

Bogosian was skating on a defensive pair with Rasmus Dahlin, but Krueger did not disclose whether or not Bogosian would return on Saturday, nor did he reveal any other changes coming to his lineup.

The lines remained mostly the same from Thursday's win at KeyBank Center, except for the Jeff Skinner line that saw Mittelstadt, Sheary and Evan Rodrigues rotate in and out with each other. That could give an indication that the Sabres will go with a lineup of 11 forwards and seven defensemen once again.

Here's a look at Friday's lines:

Join Brian Koziol for the Paul William Beltz Pregame Show beginning at noon on Saturday, where you will hear from Krueger, Bogosian, Johan Larsson and Kyle Okposo.

Faceoff on Long Island is set for 1 p.m. on the radio home of the Sabres - WGR Sports Radio 550.