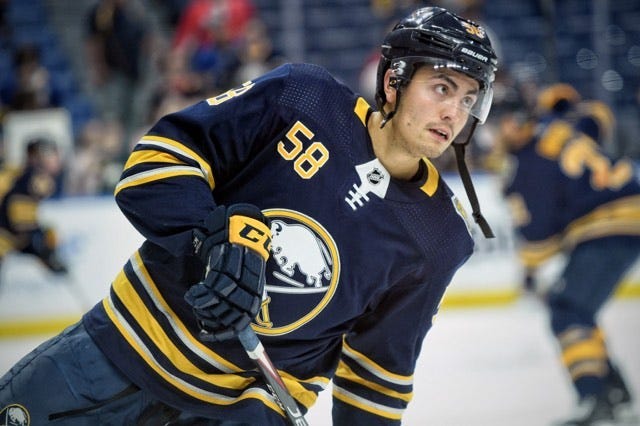 The Buffalo Sabres placed defenseman John Gilmour on waivers on Friday for the purpose of assignment to the Rochester Americans in the American Hockey League.

When the clock struck noon on Saturday, no team decided to put a claim on Gilmour, allowing him to clear waivers and join the Amerks.

Gilmour had appeared in just four games this season with the Sabres after making the 23-man roster out of training camp. In those games, Gilmour has been held pointless, while registering five shots on goal and a minus-2 rating.

With the Sabres activating defenseman Zach Bogosian from injured reserve on Thursday, the Sabres were in need of a move to create some roster space for the veteran blue liner. Bogosian is finally ready to return to action after undergoing offseason hip surgery and suffering a setback during the summer.

The Sabres' defensive group is back to full strength now, with the exception of Matt Hunwick, who will miss all of the 2019-20 season with a neck injury.

In another roster move made on Thursday, the Sabres have placed forward Tage Thompson on injured reserve as he will miss nearly 3-5 weeks with an upper-body injury.

The Sabres were off from practice on Friday, but will return to the ice on Saturday before Sunday's matchup with the Florida Panthers at BB&T Center. Faceoff is set for 5 p.m. with the Paul William Beltz Pregame Show starting at 4 p.m. on our sister station, WBEN 930 AM.