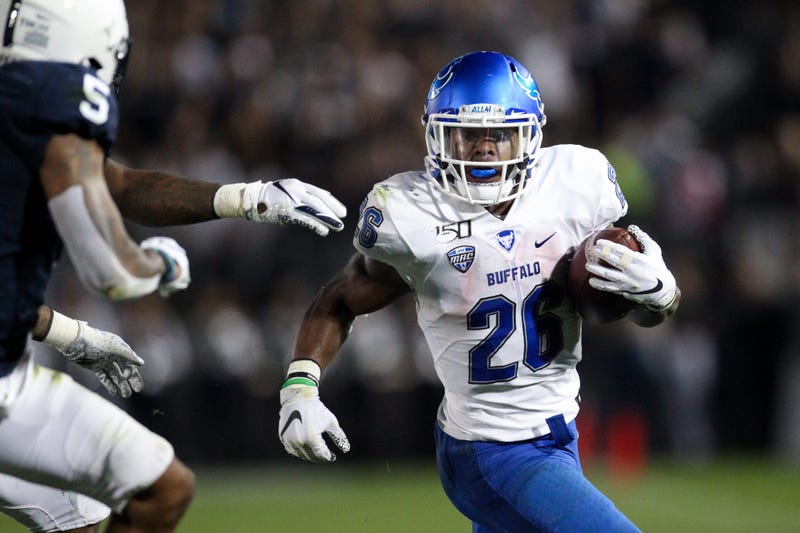 Amherst, NY (WGR 550) - After last week’s fourth quarter meltdown loss at Kent State, the University at Buffalo football team (6-5, 4-3) found itself in a must-win situation against Toledo (6-5, 3-4) on Wednesday night. The Bulls wouldn’t let a second opportunity to clinch bowl eligibility slip through their fingers as a history-making performance from running back Jaret Patterson pushed them past the Rockets at UB Stadium, 49-30.

Patterson, who’s arguably been the Bulls’ most consistent player all year, turned in his best performance in a Buffalo uniform to date, racking up a career-high 192 rushing yards on 32 carries and scoring five touchdowns (four rushing, one receiving). Patterson’s single-game career-high in rushing yards entering the night was 187, which he totaled last November against Kent State. Patterson also had six multi-touchdown games in his UB career prior to the matchup; however, he had never scored more than two in a game until Wednesday night’s victory.

The sophomore running back set a number of program records. Patterson became the first player in Buffalo’s FBS history (since 1999) to score five touchdowns in a game, and is the first Bull to rush for four or more touchdowns in a game since Branden Oliver accomplished the feat in 2013. His five touchdowns also tied a single-game Mid-American Conference record; no player in the conference has ever scored six. Lastly, Patterson became the first MAC player to rush for four touchdowns since Toledo’s Sakif Seymour, who was on the opposing sideline Wednesday night, did so back in 2017.

Six of the Bulls’ seven scores on Wednesday night were rushing touchdowns, a program-best since joining the FBS. Oddly enough, Kevin Marks was the first UB player to find the end zone, not his partner in the backfield, with a four-yard rushing score to put Buffalo up 7-0 with 3:38 to go in the opening quarter. Patterson did, however, bust-out a 44-yard run earlier in the drive, a play that seemed to, somewhat, wake up the Bulls' offense. Marks would finish the game with 118 rushing yards on just 16 carries to go with his score. It was just the second time this season both members of the Buffalo backfield rushed for over 100 yards in the same game. Earlier this season against Miami (OH), Patterson ran for 183 yards, his previous season-high, and Marks rushed for a total of 101.

Less than a minute after Marks’ touchdown, linebacker Matt Otwinowski intercepted Toledo’s Eli Peters at the Rockets’ 29-yard line, setting the Bulls’ offense up with a short field. On the very next play, Patterson caught a screen pass from Kyle Vantrease and took it 24 yards to the end zone for, surprisingly, his first reception touchdown as a Bull, stretching the UB lead to 14-0 with 2:51 to go in the first quarter. Patterson finished the game with three catches for 35 yards.

A pair of one-yard rushing touchdowns from Seymour and Bryant Koback put Toledo right back in the game and knotted the score at 14-14 with 13:05 to play in the first half. However, the Bulls responded promptly with a 10-play, 75-yard scoring drive that ended with a one-yard Patterson rushing touchdown to put them back in the lead.

Patterson would add another one-yard rushing score before halftime. However, Toledo’s Thomas Cluckey, who replaced Evan Davis after a missed 37-yard field goal in the first quarter, made a pair of field goals in the second frame to make the score 28-20 in favor of the Bulls at the midway point.

Red-shirt freshman Carter Bradley replaced Peters, who was kept out with an undisclosed injury, under center for Toledo in the second half. The Rockets managed to get a field goal on the first drive of the third quarter, cutting the deficit to just five points.

From that moment though, the game began to tilt in Buffalo’s favor, and rather decisively. Patterson’s third rushing touchdown of the game put the Bulls back ahead by two scores, 35-23, and would complete another long, successfully orchestrated possession by the UB offense (14 plays, 75 yards, 5:17). Antonio Nunn hauled in a few big catches on the scoring drive, one being good for a 28-yard gain on a crucial third-down. The junior receiver finished the night with a game-high five catches for 89 yards.

Toledo’s final chance to really get back in the game was thwarted when the UB defense came up with a big stop on 4th-and-goal at it’s own seven-yard line with 3:26 remaining in the third quarter.

A seven-yard rushing touchdown from Patterson, his fifth and final score of the night, stretched the Buffalo lead to 42-23 with 11:10 left in the game. The sophomore would surpass his single-game rushing record later on in the final frame, and he even had one last chance to add another score with just over three minutes left, but Vantrease pulled back the hand-off and ran the ball in himself for the one-yard score, extending the lead to 49-23.

Toledo’s Ronnie Jones would score a touchdown in the final minute to make the final score 49-30, but the Bulls did an excellent job maintaining control and closing out the game strong in the fourth quarter, something they needed to do after the Kent State loss.

Wednesday night’s win improves the Bulls’ overall record to 6-5, making them bowl eligible for a third consecutive season and fifth time in program history. However, Buffalo knows as well as anyone that six wins and bowl eligibility doesn’t guarantee a trip to a postseason game. Just two years ago, despite a 6-6 finish, the Bulls were one of three teams that did not get a bowl bid, despite being eligible. Now, if UB defeats Bowling Green in the regular season finale, that would likely be enough to get them a bowl game bid.

The Bulls will host Bowling Green at UB Stadium on Friday, November 29, with kickoff scheduled for 12 p.m. You can listen to the game, along with pregame and postgame coverage, on the official radio home of the UB Bulls – ESPN 1520.