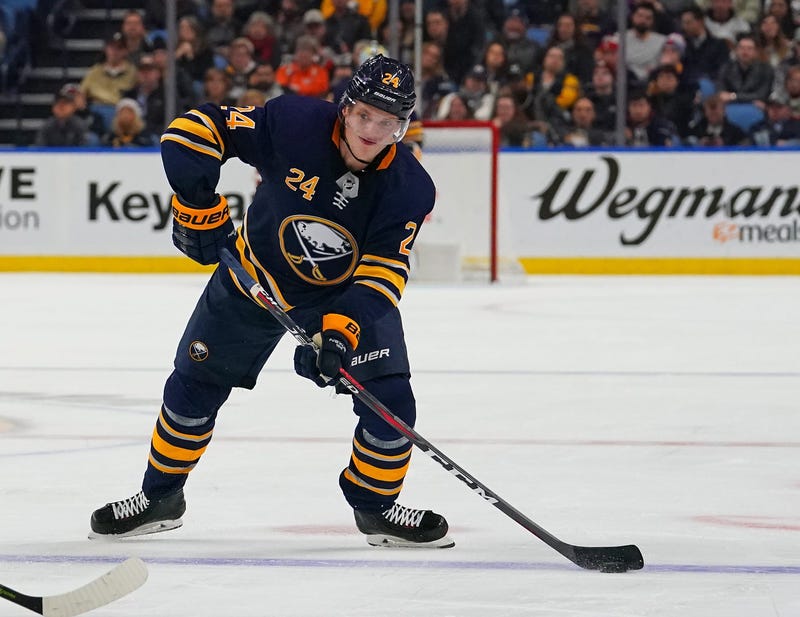 Nearly two weeks after an original report from Igor Zhukov of Sport-Express in Russia said that defenseman Lawrence Pilut was looking to sign a deal in the Kontinental Hockey League next season, the team Traktor Chelyabinsk made the news official on Tuesday as they have signed the Swedish blue liner to a two-year deal.

Pilut spent two seasons with the Buffalo Sabres organization after coming to North America before the 2018-19 season from HV71 in the Swedish Hockey League.

During his time split between the Sabres and the Rochester Americans in the American Hockey League, Pilut showed glimpses of a promising puck-moving defenseman with a higher offensive upside. The 24-year-old from Tingsryd, Sweden was a two-time AHL All-Star with the Amerks, and managed to amass 49 points (10+39) in 67 AHL games.

At the NHL level, Pilut appeared in 46 games over two seasons, scoring one goal to go along with five assists for six points.

His first season in North America saw Pilut get off to a great start in Rochester and earn himself some time with the Sabres. He finished the 2018-19 campaign with four goals and 22 assists for 26 points in the AHL, while putting up his goal and five assists for six points in 33 games with Buffalo.

In three playoff games with the Amerks, Pilut went pointless, but ended up sustaining a shoulder injury that saw him undergoing offseason surgery that forced him to miss the first part of the 2019-20 season.

After a slow start in Rochester this season, Pilut ended up re-gaining his form and putting up six goals and 17 assists for 23 points in 37 games. However, Pilut went pointless in 13 games in the NHL with the Sabres and ended up finding himself in-and-out of the lineup just before the shutdown of the season due to the coronavirus pandemic.

According to a team statement released by Traktor Chelyabinsk, "[Pilut> had an offer to stay in the NHL, but we managed to persuade him that we could offer more ice time and a bigger role in Traktor."

However, Lance Lysowski from The Buffalo News reports that Pilut’s contract in the KHL appears to have an NHL opt-out clause, but the details at this time are unclear.

Pilut’s contract in the KHL has an NHL opt-out clause, but the details are unclear. Can he leave during the season?Pilut’s agent declined comment when I asked about that important detail.

Pilut was set to become a restricted free agent this summer. However, John Wawrow from the Associated Press reports that the Sabres can retain his NHL rights for the next three years by issuing him a qualifying offer this offseason. It had been reported at the time of the original report back in May that it was Buffalo's intention to retain his rights if he was intending to sign in the KHL.

The NHL has yet to make any formal announcement of any dates of importance for the 2020 offseason.