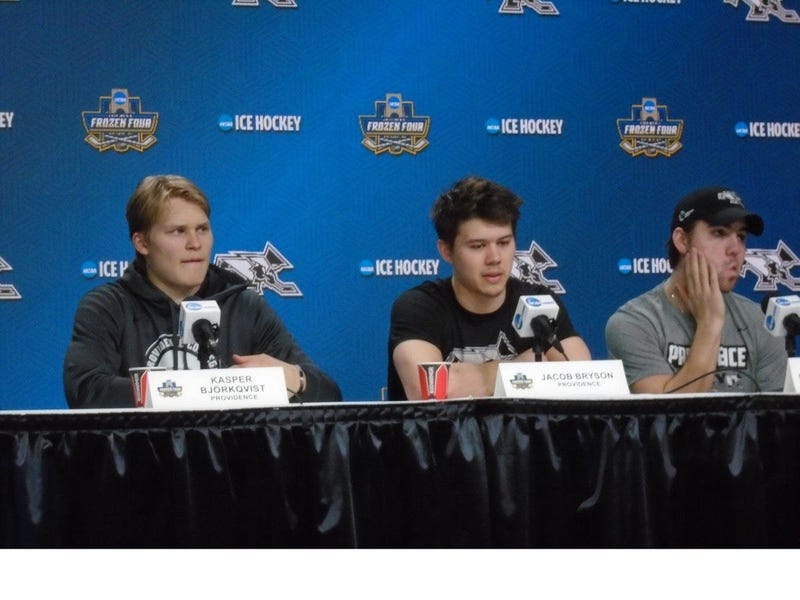 Buffalo, NY (WGR 550) - Jacob Bryson was the Sabres' fourth round pick in the 2017 NHL Draft. He’s in his junior season at Providence and he’s here in Buffalo for the Frozen Four.

Bryson is one of the Friars' leaders, but he’s an undersized defenseman. He’s enjoying his first taste of Western New York, “It’s a great city, we’ve been here for two days now and the hospitality here has been awesome at the hotel and at the rink, the people here are just awesome.”

The last time the Frozen Four was in Buffalo, 2002 first round pick Keith Ballard played for Minnesota. Bryson said he’s excited that the tournament is in the city that drafted him, “Yes for sure, Buffalo’s close to home (London, Ont) so my whole family will be out here which is nice. It’s so special just to be here and Buffalo does make it nicer.”

Bryson has improved a lot in his three years at Providence. He said, “Coach Leaman has done a great job of just developing every day. We do so much video after practice and I’ve come a long way just playing under coach Leaman’s wing.”

The Sabres' development department is in constant contact with all the players that the Sabres draft. Bryson said he likes hearing from them, “Buffalo does a good job of keeping tabs on their players trying to get out to see them as much as possible.”

Nate Leaman has seen a difference in Bryson’s game. He said, “He’s learned to use his feet to defend because when you’re Jacob’s size, you’re not going to defend using your body, you’ve got to use your feet and be quick to get to areas and I think Jacob is very good at that and I think being assertive on the ice is the big thing now and any game he goes into he has to potential to be the best player on the ice.”

Jack Dugan is a freshman out of Rochester. He was taken in 2017 by Vegas in the NHL Draft. He was second in team scoring with 39 points in 41 games, and he had 10 assists and 11 points in his last eight games. He said his ice-time increased as the season went on, “It definitely wasn’t handed to me, I had to earn my way and then got a shot on the power play like the second or third week into the season and then I ran with it.”

You hear coaches talk about what players do the get the puck back. Leaman thinks that’s where Dugan got better, “Learning to play without the puck. Jack’s always been a pretty special player with the puck, he’s got great vision, he’s got great poise.

“When we recruited him we expected him to come in and make an impact and he’s done that.”

All four teams practiced at the arena on Wednesday and then met with the media.

Providence opens the Frozen Four at 5:00 on Thursday when they play defending champion Minnesota-Duluth. The late game will start one hour after the early game ends, which puts it at around 8:30. In that game, Denver takes on UMass.