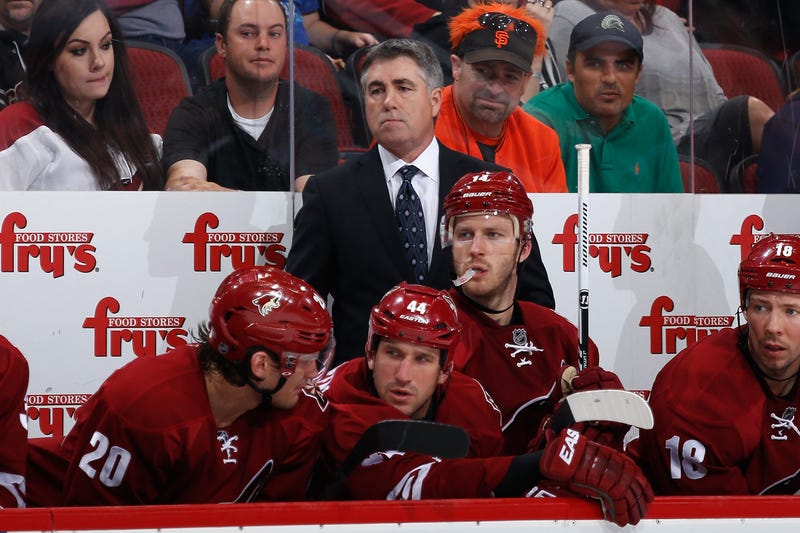 It appears as though the Buffalo Sabres are trimming down their options for their vacant head coaching position.

According to a report from John Shannon of Sportsnet on Friday, he has heard that Pittsburgh Penguins assistant coach Jacques Martin and former Arizona Coyotes head coach Dave Tippett are the front runners for Buffalo's opening.

Martin has been with the Penguins since 2013 as an assistant, and knows general manager Jason Botterill and assistant general manager Randy Sexton very well. As a head coach, Martin has coached a combined 1,294 games with the Ottawa Senators, Florida Panthers, St. Louis Blues and the Montreal Canadiens. Overall, Martin has gone 613-481-119-81 in parts of 17 seasons as a head coach, but has struggled in the postseason with a 50-61 record and never advancing past the Eastern Conference Final.

As for Tippett, he has coached a total of 1,114 games with the Dallas Stars and Arizona Coyotes organization. After putting up a 271-156-28-37 record with the Dallas Stars and appearances in five consecutive playoffs, Tippett joined the Coyotes and led them to a 282-257-83 record and three playoff appearances in eight seasons. Tippett and the Coyotes agreed to mutually part ways in the June of 2017, and has since been serving as a senior advisor for the Seattle NHL expansion franchise.

It has been more than a month since the Sabres had relieved Phil Housley of his duties as head coach. Since then, it has been speculated that the team has interviewed a number of candidates for its vacant position. Todd McLellan was one of the first reported interviews for the Sabres, but ended up taking the head coaching opening with the Los Angeles Kings. Swedish National Team head coach Rikard Grönborg was also thought to have been a possible candidate for the opening, however he ended up taking a head coaching job in Switzerland with the ZSC Lions.

Former Columbus Blue Jackets head coach, and current assistant coach Todd Richards was another potential person of interest for the Sabres, however Shannon reported on Friday that the Sabres will not interview Richards for the job.

There will be no Interview for Todd Richards in Buffalo, for the Sabres’ vacant head coaching job.

Other names that have been linked to the Sabres in one way or another includes Toronto Marlies head coach Sheldon Keefe, and Providence College head coach Nate Leaman.

Botterill is currently over in Slovakia, serving as a general manager of Team Canada at the IIHF World Championship. It is unclear if a hire will be made during the tournament, which ends on Sunday, May 26. Canada opened the tournament on Friday with a 3-1 loss to Finland.

Keep it locked to WGR and WGR550.com for the latest on the Sabres' coaching search.