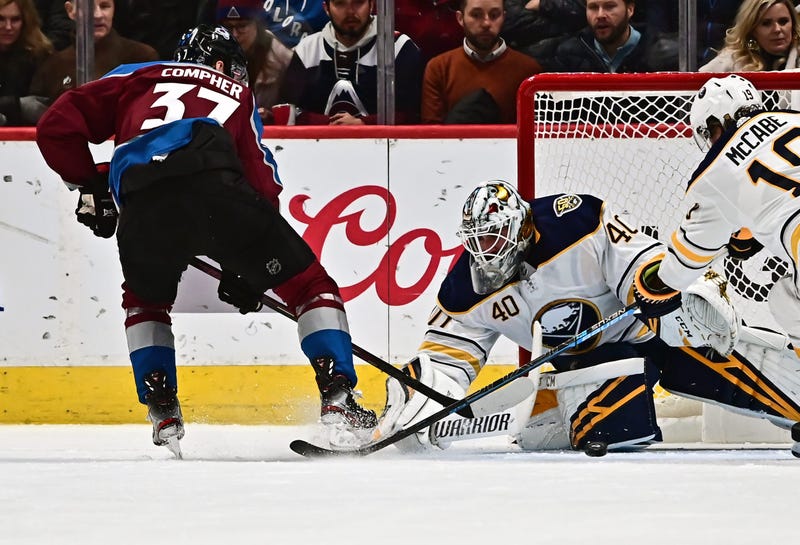 The Buffalo Sabres played catch-up in the goal-scoring department all evening, but the blue and gold were eventually defeated 3-2 by the Colorado Avalanche at the Pepsi Center in Denver.

It was a good start to the opening period for the Sabres with Buffalo holding on to a 7-1 shot advantage early on. The team was playing a physical game and finishing their checks all around the ice, but despite the quick jump, the game remained scoreless.

The Avalanche eventually broke the goose egg on the scoreboard with 14:24 gone in the first as Colorado began to find their legs after Buffalo's fast start. The Avalanche responded with the game's next seven shots on goal, and the seventh shot found the back of the net with Henri Jokiharju in the penalty box for a tripping minor. It was Colorado captain Gabriel Landeskog beating Carter Hutton after taking a nice pass from J.T. Compher for his 17th goal of the season, and to give the Avalanche the 1-0 lead.

Buffalo did not waiver as moments later, Zemgus Girgensons got to the Colorado net and re-directed a puck past Avalanche netminder Pavel Francouz to even the score at 1-1. Girgensons' 12th goal of the season marked his third straight game with a point dating back to last Saturday afternoon's matchup with the Pittsburgh Penguins.

The score remained tied at 1-1 until the 7:15 mark of the second period when Colorado struck again on the man advantage. With Rasmus Dahlin in the box for slashing, he could only watch as forward Martin Kaut scored his first career goal in the NHL off a juicy rebound given up by Hutton. Kaut's tally made it 2-1 Colorado as special teams hampered Buffalo for the second time in as many periods.

But just as they did in the first period, the Sabres had another answer to an Avalanche goal. This time with 5:04 left in the second, Jake McCabe let loose a wrist shot from the point that was re-directed in front of Francouz by Curtis Lazar. The goal was Lazar's fifth goal of the year, and his first goal since since Jan. 14 against the Vegas Golden Knights.

The score remained even at 2-2 until the 11:54 mark of the third period when the Avalanche took their third lead of the night. The Sabres had a costly defensive breakdown in their own end in front of Hutton, and cashing in on the opportunity was the former Sabres forward in Compher. His 10th goal of the season gave Colorado a 3-2 advantage with time not on Buffalo's side.

The Sabres were unable to find the equalizer despite a frantic effort in the final 1:30 of the game. With Hutton on the bench, Buffalo deployed an extra attacker and were able to generate several good chances for sniper Victor Olofsson. He was stymied by Francouz multiple times, and the Avalanche prevailed for the win.

The road trip continues on Friday night when the Sabres take on the Vegas Golden Knights at T-Mobile Arena. Faceoff is set for 10 p.m. EST with the Paul William Beltz Pregame Show with Brian Koziol starting at 9 p.m. on WGR.