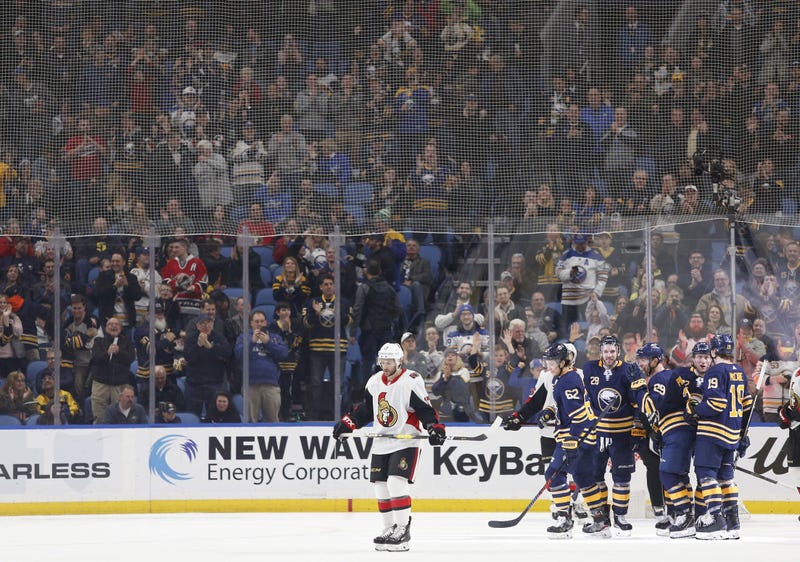 Buffalo, NY (WGR 550) - All night long, I just had a feeling that Jason Pominville was going to score. He scored in his first game back from Minnesota, he scored in his 1,000th game and he scored in, what could be, his last game in Buffalo as a Sabre. Pominville joined us on the post-game show and said of the fans, "Thank you for everything. I left in tears and came back with a smile and who knows what is going to happen in the future."

Pominville doesn’t know if he wants to retire or wants to keep going with his career. His contract is up and he doesn’t know if he’ll be asked to be back. He said it hit him this morning, "I honestly thought about it this morning, then Paul started hitting me with questions and I had to step away. I don't know what the future holds but I'll enjoy the next couple days."

Pominville has played 732 games in a Sabres uniform and he has a respect for the crest and the city that many others on this team don’t have. Pominville has 217 goals as a Sabre and 520 points.

After he scored, the fans seized the moment and just wouldn’t sit down. They cheered for No. 29, and Carter Hutton made him go out to center ice where he clapped for the fans.

The Sabres fell behind in this game, but took it over with four straight goals in the final 33:38. Buffalo also out-shot the Senators 28-11 over the final two periods.

The fans got the see Victor Olofsson rifle a shot from the circle on a power play for a goal and Jack Eichel pick up three points to give him 80 on the season. Eichel was chosen as the team’s MVP.

Hutton’s teammates picked him as the team’s unsung hero. After his last few starts, he had played well, but didn’t win. He did win this game, giving him 18 on the season.

The Sabres also broke their eight-game losing streak in the final home game. Last season, the Sabres won 11 games in the arena, and this season they increased that total by 10 to 21.

Buffalo has one more game and it’s in Detroit on Saturday.