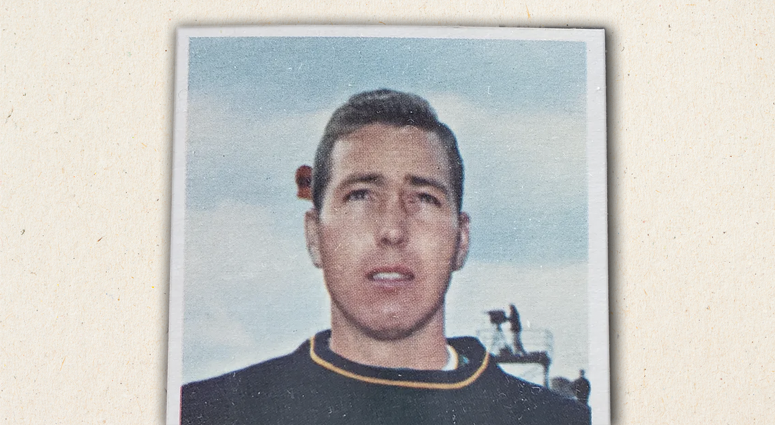 I don't remember exactly why I started building a set of 1961 Fleer Football. Part of the reason, surely, was that it was affordable for its vintage. The set isn't particularly attractive or popular. Perfect for me!

I didn't get there, giving up at about 50% of the way. But it is a good way to get into certain vintage sets on a budget -- find the ones that are less-coveted. You don't have to settle on building 1952 Topps Baseball. There are many options!

I do like about this set that it features both NFL and AFL players. Through some of the '60s, the AFL guys were Fleer or Topps, the NFL guys were on Philadelphia. This 220-card set has the stars from each league. That number, 220, also helps make this a good set to try to build.

This card marks somewhat of a delineation between Bart Starr's early career, during which he mostly served as a backup, and the period for which he is best remembered -- the starting quarterback of one of football's greatest dynasties. Starr's Green Bay Packers, coached by Vince Lombardi, won NFL titles in 1961, 1962, 1965, 1966 and 1967 -- the last two of which culminated with victories in the first two Super Bowls. Starr was named the MVP of each of the first two Super Bowls.

Green Bay lost to Philadelphia in the 1960 title game, but then went 9-0 in the postseason with Starr over the remainder of the decade. In those nine wins, Starr threw 14 touchdown passes and only three interceptions. He also ran for one, a one-yard sneak for the famed winning score of the "Ice Bowl" over Dallas.

Starr was the Packers' head coach for nine years, only ever making the playoffs in the strike-altered 1982 season. Starr died one year ago today (May 26, 2019) at age 85.

This example of mine is pretty clean, with a slight top-to-bottom centering issue and a couple of soft corners at the bottom. Maybe it's in the PSA 6 range? If so, the card would be worth about $100.
Photo: Mike Schopp (@Schopptalk)