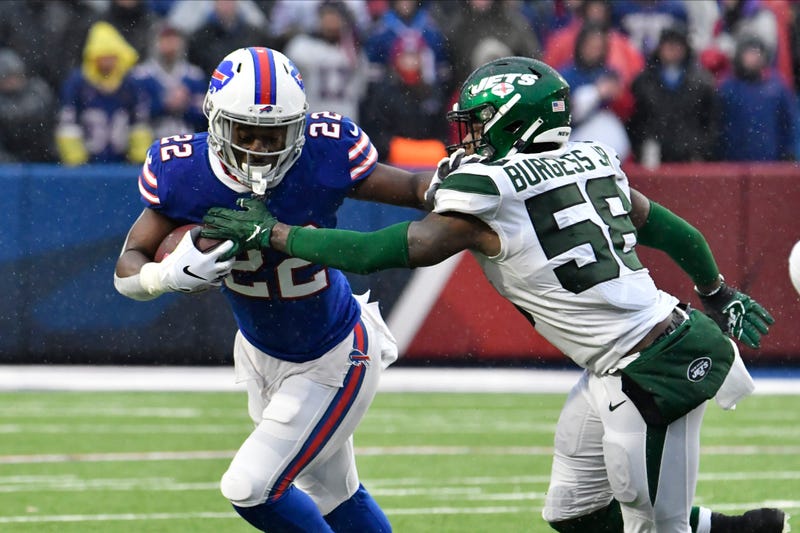 Moving forward, the Buffalo Bills offense seems to be set when it comes to their starting running back.

Devin Singletary had an excellent rookie season, finishing with 969 yards from scrimmage, while averaging an efficient 5.1 yards per-carry. He showed to be a dynamic weapon on the ground and through the air, especially towards the end of the season and into the playoffs.

But who will be the guy that spells Singletary?

Last season, that player was veteran Frank Gore, but Gore will be a free agent this spring. He turns 37 in May, and he was extremely ineffective during the second half of the 2019 season.

Will the front office look to reel in a big name free agent like Melvin Gordon or Derrick Henry? Could they draft another Day 2 or Day 3 rookie?

Perhaps their best and most cost-affective option might already be under contract.

Why not consider T.J. Yeldon as the Bills' RB2?

2019 was an odd start to Yeldon's career in Buffalo.

During the regular season, he dressed in just six games. That was following a final season with the Jacksonville Jaguars where the 26-year-old had 55 receptions for 901 yards from scrimmage, including 487 receiving yards. He also had five touchdowns, including four receiving.

It wasn't just one season of success through the air for Yeldon. His first four seasons saw reception totals of 36, 50, 30, and 55. On the ground, the 6-foot-1, 223-pound runner averaged at least 4.0 yards per-carry in three of those four years.

Sounds like the perfect guy to rotate in at times, especially in passing situations, no?

There were fumbling issues during the summer for sure, but why in the final eight weeks, when Gore averaged under 3.0 yards per-carry seven times, did Yeldon not see any opportunity?

The Bills could correct this mismanagement of, what could be, a very productive weapon in 2020. A time where they need exactly what Yeldon was for Jacksonville over the course of four seasons.

He is young, versatile, and has a salary cap hit of just $1.9 million next year.

Not sure Buffalo needs to look outside their own roster to find what they are looking for in the backfield.