For the first time in 27 years, the Buffalo Bills are one win away from making a return to the Super Bowl.

Buffalo kept its magical 2020 season going Saturday night with a hard-fought, 17-3 victory over the Baltimore Ravens at Bills Stadium in the Divisional Round of the NFL playoffs. The Bills will now advance to the AFC Championship Game for the first time since the 1993 season.

Despite being out-possessed by a wide margin in the first quarter, the opening frame ended with Buffalo on top of Baltimore, 3-0.

The Ravens rushing attack allowed the offense to move the ball down the field with ease on Baltimore's opening drive. Levi Wallace picked up the first sack of his career on the opening series, putting the Ravens in a second-and-long situation after dropping Lamar Jackson for a loss of 11 yards.

The Bills weren't able to capitalize immediately after Tucker's miss. But, after forcing a three-and-out on the Ravens' second possession, Buffalo's offense was gifted a short field to work with following a shanked punt.

Allen and company began the series at the Baltimore 38-yard line, but were held to a field goal attempt after just a five-play drive. Tyler Bass nailed his first field goal attempt of the night, this one a 28-yard kick, to give the Bills a 3-0 lead late in the first quarter.

Bass had a chance to add to the lead early in the second quarter. But, the rookie missed a 43-yard attempt; kicking in the same direction Tucker did when he missed earlier in the game.

Later in the second, with a chance to tie the game and no longer kicking into the wind, Tucker missed another field goal attempt, this one from 46 yards out, and off the right goal post. Prior to Saturday's game, the veteran kicker had only missed two field goal attempts in his entire postseason career, with one being last week against the Tennessee Titans.

Both sides traded punts in the final strench of the first half. However, Tucker was able to, somewhat, redeem himself before halftime, tying the game at 3-3 with a 34-yard field goal with just 0:04 left on the clock.

The field goal capped an eight-play, 57-yard drive that Baltimore put together in under a minute of game time, and got the Ravens on the scoreboard with Buffalo set to receive the ball to start the second half.

The Bills took the lead back on that first drive of the third quarter, finding the end zone after and 11-play possession that lasted 5:31.

Quick throw to @StefonDiggs for the TD!

Devin Singletary and the Bills run game got more involved after a quiet first half. Singletary carried the ball three times for 20 yards on the scoring drive, along with adding a nine-yard catch that helped set up Diggs reception score.

Diggs finished tied for a team-lead with eight catches for a game-high 106 yards to go with his touchdown reception. Fellow receiver John Brown also caught eight passes for 62 yards. Singletary, finished third on the Bills in catches, finishing with three. The running back also led Buffalo with 25 rushing yards on seven carries.

Stefon Diggs over 100 yards on the night.

Diggs joins James Lofton as the only Bills to ever tally back-to-back 100-yard receiving days in the same postseason.

Baltimore responded to Diggs' touchdown with a long drive of its own. In 15 plays, the Ravens got all the way to Buffalo nine-yard line. However, Jackson was intercepted in the end zone on 3rd-and-goal by cornerback Taron Johnson, and the Bills cornerback took the ball 101-yards for a touchdown, extending Buffalo's lead to 17-3 in the final minute of the third quarter. It was the first time in Jackson's career he'd thrown an interception in the red zone.

Jackson left the game after taking a hit near Baltimore's end zone late in the third quarter. Following a bad snap, Jackson ran-down the ball and was able to throw it away, but was tackled while throwing and appeared to be hurt on the play. He was replaced at quarterback by undrafted rookie Tyler Huntley, and was ruled out for the remainder of the game midway through the fourth quarter after going through concussion protocol.

Jackson finished the night 14-of-24, passing for 162 yards along with the interception. On the ground, Jackson ran for 34 yards on nine carries. Both Baltimore running backs, Gus Edwards and J.K. Dobbins, finished with 42 rushing yards on 10 carries.

Huntley performed admirably, completing 6-of-13 passes for 60 yards in a quarter of action. The Ravens even got down inside the Bills red zone again late in the game. However, the Buffalo defense came up with another stop, as linebacker Tremaine Edmunds broke-up a pass to tight end Mark Andrews in the end zone on 4th-and-goal with 2:41 to go.

The Bills were able to run out the rest of the clock thanks to kneel-downs and a running-into-the-kicker penalty on the Ravens right after the two-minute warning, which fully sealed the win for Buffalo.

In his second playoff victory, Josh Allen finished 23-of-37 in the air, throwing for 206 yards and a touchdown. 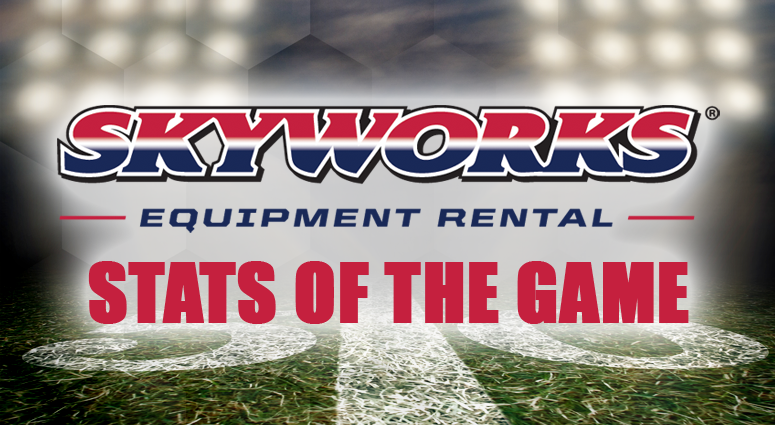 The Bills will now wait for the result of Sunday's AFC Divisional Round matchup between the No. 1 seed Kansas City Chiefs and No. 6 seed Cleveland Browns, with the winner moving on to face Buffalo in the conference championship.

Kickoff between the Chiefs and Browns is scheduled for 3:05 p.m. EST.

For the first time since 1994, we’re… pic.twitter.com/9QmONpoT4g