Baltimore, Md. (WGR 550) - The Buffalo Bills came back from 17 points down to rally and beat the Baltimore Ravens, 23-20, as time expired on Sunday at M&T Bank Stadium.

That means I get to go back to starting with my Arrows Up: 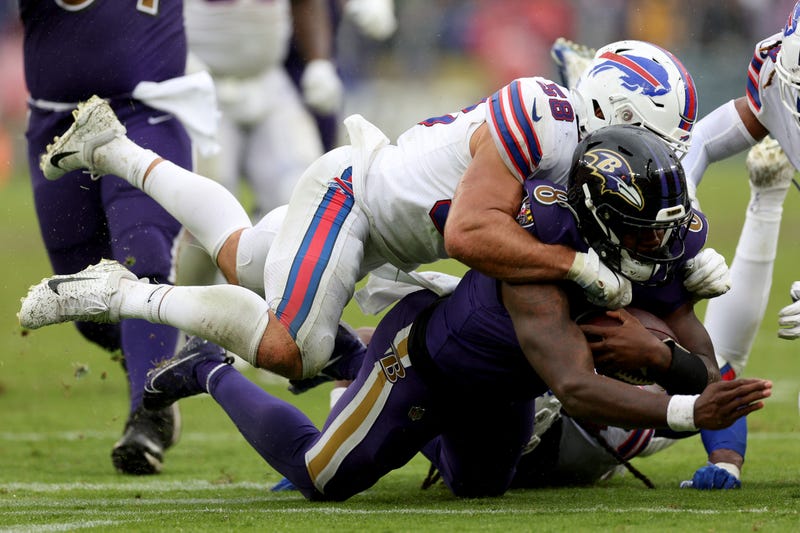 The comeback/whatever was said at halftime

The Bills were down 20-3 with less than 10 seconds left in the first half. In mostly rainy and wet conditions, they came back to win the game, 23-20.

It was tied for their ninth-largest comeback ever.

There was a lot of talk this week about the Bills being 0-for-their-last-7 in one-score games. That doesn’t, or at least shouldn’t, exist anymore.

Baltimore had only four possessions after halftime. Those ended with two punts and two interceptions, both by Jordan Poyer.

The Ravens turned the ball over twice, and both came on interceptions by Poyer and in huge situation. This included a 4th-and-goal with the game tied at 20-20, where Poyer picked off Ravens quarterback Lamar Jackson in the end zone that allowed the Bills to start their would-be game-winning drive from the 20-yard line instead of their own two-yard line.

Milano was all over the field and pretty sensational, collecting a game-high 13 total tackles, including two for loss. He brought down Jackson 1-on-1 in the open field on a few occasions, as well.

Edmunds was also a tackling machine, collecting nine total tackles, including two for loss, and added a quarterback hurry.

It wasn’t just the defense that stepped it up in the second half.

The Bills also had 187 total yards of offense and scored 13 points, including the game-winning field goal as time expired.

Bills head coach Sean McDermott and his staff did a great job of managing the clock on the very last drive of the game to set up the final kick for the win.

The Bills got the ball on their own 20-yard line with 4:09 remaining. They used every second of it by marching 67 yards down the field in 12 plays to set up the final field goal, and even stayed short of the goal line intentionally near the end, in order to let the clock wind down and not score with time remaining for the Ravens to have the ball.

The Ravens tight end came into the game as one of the top receivers in the league, and leading Baltimore with 22 catches on the season. The Bills held him to only two catches for just 15 yards.

The Ravens' two biggest plays of the day came on a 21-yard pass in the second quarter, which was a wild scramble and prayer thrown from Jackson that was somehow caught, and a 20-yard pass that was primarily made on a run after the catch in the first quarter.

Other than that, the Bills did not allow any plays longer than 18 yards from a Ravens offense that had 10 pass plays and four run plays of 20 yards or more coming into the game.

Allen ran 11 times for 70 yards, averaging 6.4 yards per-carry, but it was his timely runs in critical situations that really helped, especially in the second half when he also scored on one of those runs.

The Bills rookie wide receiver saw his first NFL action after Jamison Crowder left with an ankle injury. He caught two passes for 23 yards, but one was a huge 14-yard gain on 2nd-and-10 late in the third quarter that helped set the offense up for a critical touchdown.

The Bills were forced to punt from their own 39-yard line with the score tied at 20-20 and 13:45 left in the game. Martin boomed a punt 56 yards that went out of bounds at the Ravens' five-yard line.

It was perfectly placed.

Kicker Tyler Bass connected on each of his two extra point attempts and both field goals, including the game-winner.

With the rain and wet conditions, none of the snaps from long snapper Reid Ferguson, holds by Martin, or kicks by Bass were guarantees. The three did a good job of making sure the operation went smoothly.

The Bills held the Ravens out of the end zone on half of their trips into the red zone. Baltimore was 2-for-4 inside the Bills' 20-yard line.

The Bills were only flagged four times for just 31 yards. 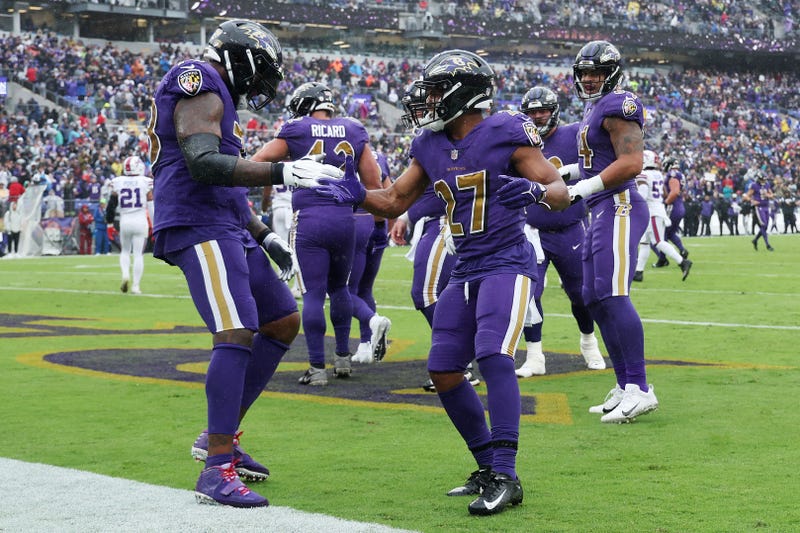 Until the final drive of the first half, it was maybe the worst performance from the Bills offense we’ve seen in a long time. Up until that point, with just two minutes left in the half, they had only 63 total yards and three points.

Allen didn't start off the game vey well at all, connecting on only five for his first 13 passes for just 42 yards. His first pass was almost intercepted. His second pass was, although it was tipped slightly at the line of scrimmage.

The Ravens defense did a good job of getting hands up at the line of scrimmage, which caused Allen to have several passes tipped or batted down.

Just like last week in Miami, running back James Cook, once again, had an easy catch out of the backfield that could have gone for good yardage. However, he looked up field too quickly and dropped it.

The Bills had already turned the ball over once, were down 14-3, and Singletary fumbled when a Ravens defender just swatted at the ball. It led to a 17-3 deficit.

Third down offense and defense

Once again, the Bills had a third down and very short yardage and didn’t convert when Zach Moss was stopped in the backfield on a 3rd-and-1 in the second quarter.

They punted it away, and the Ravens made it 20-3 on their next possession.

Photo credit Outlet Liquor
We strive to be a platform where varying opinions may be voiced and heard. The views, thoughts, and opinions expressed by the author(s) of this article and/or by those providing comments are theirs alone, and do not represent those of Audacy, Inc. We are not responsible for any damages or losses arising from this article and/or any comment(s).
Featured Image Photo Credit: Tommy Gilligan - USA TODAY Sports